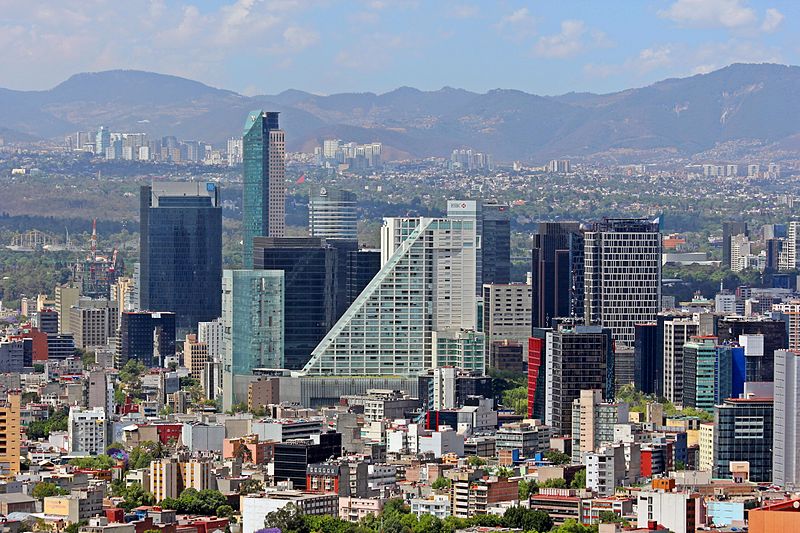 The Astrogeographical Position of Mexico City and transits of the outer planets in relation to the government of Mexico. Political astrology & history.

Compare: Templo Mayor in Mexico City and the Astrogeographic Position of Tenochtitlan

The Astrogeographical Position of Mexico City

Astrogeographical resonance degrees of Mexico City for morphogenetic field level 1 which describe the supra-regional, global topics of the capital of Mexico and its governments: the central area of mexico City is located at around 10° of aristocratic air sign Libra sign of openness, decoration, relationship, beauty, peace, courtly culture and around 14° of dynamic fire sign Sagittarius the sign of priest castes, knowledge, thinking, philosophy, shamanism, style, design, fashion, ornamentation and luxury.

Neptune square between June 2016 and February 2020

Neptune had first approached the square position to the 14° Sagittarius resonance degree of the Mexican capital and government when he reached 12°Pisces by June 2016. That moment fell right in the process of the nomination of Donald Trump as official candidate for the US Presidential Elections of November 9 2016. During his campaigns Trump had announced to built a wall between the USA and Mexico and to make Mexico pay for it. And Trump had also declared his plans to threaten Mexican exports into the USA. The Neptune square thus materialized as an announcement of public subjugation and humiliation of the Mexico including a statement of superiority by the coming president of the country´s dominant northern neighbour.
In fact Neptune did not actually threaten the territorial integrity of Mexico. But it has caused a serious insecurity (Neptune) about the future development because of Trumps allegations that the Mexican economy was dependent on the goodwill of the USA. A final evaluation of the effects of this square transit cannot be made before it will be over in the spring of 2020. Furthermore it seems remarkable that the exterior threats to the mexican government have been effective on a propagandistic level rather than through direct actions.

On an interior level the climax of the Neptune square was acompanied by a change of governement through a landslide victory of the social democratic MORENA movements and its allies in the General elections of July, 1 2018.

The 2018 General Elections were held with the Sun indicator for the head of government (kingdom) at 10°Cancer exactly square the 10°Libra astrogeographical resonance degree of Mexico City. As the mexican general Elections are set to take place on that same date every six years and a President once elected is not eligible for reelection that Sun position at 10° Cancer defines the regular change of the head of government with each general election.

Retrograde Neptune indicator for a process of self -healing, self – realization and awareness of ones own weaknesses and corruption was square to the 14°Sagittarius resonance degree of the capital and government from 16°Pisces.

Saturn square to Mexico City between March 2024 and February 2025

The next tight transit of tension from one of the outer planets will be from Saturn moving over the 14°Pisces square position to the 14°Sagittarius resonance degree of Mexico City in time for the 2024 General Elections that will be held on 1 July of that year.

The Birth Charts for Mexico

Like many other South American revolutions and declarations of independence he Mexican War of Independence between 1810 and 1821 was a consequence of the Napoleonic Wars in Europe which terminated the Spanish hegemony over large parts of the Americas.

Pluto squares to the mexican capital appear to represent the most important factor in the two most important events that changed the political system in Mexico: during the abolition of the spanish colonial rule over Mexico in 1810 and also during the spanish conquest of the Aztec Empire in 1521 when Pluto had been in exact square position to the 10°Libra resonance degree of the mexican capital from 9°Capricorn (see chart below and also my article on Tenochtitlan).

The Mexican War of Independence began in November 1810 with intense pressure on the mexican government from Pluto at 16° Pisces square to the 14°Sagittarius resonance degree of the capital area in Mexico City. Pluto stood for the challenge to the stability of the existing government through the need for adaptation to factual changes in the social, economical, cultural and technological situation and living conditions in the country.

At the same time Neptune the planet of dissolution of unstable structures and conjunct Saturn the planet of stabilization, reforms and establishment of solid and long-lasting governmental institutions were approaching the 14°Sagittarius resonance degree of the Mexican governments.

The charts for the Mexican Constitutions of 1857 and 1917

The chart for the Federal Mexican Constitution of 1857 shows highly intense aspects in relation to the 10°Libra resonance degree of the capital Mexico City. The Moon – Saturn conjunction near 8° Cancer square to Mexico City shows an act of emotional separation and of cutting the umbilical cords with the colonial power and other ties and obstacles during the birth process of the mexican nation. Jupiter the planet of victory was cojunct the North Node indicator of the actual aim of the constitution at 7°Aries and in opposition to the 10°Libra resonance degree of the capital city and central government. This constellation seems to emphasize the strengthening of the importance of each single (Aries) state in the federation but also challenge the of emotional identification with the central government through the square to the Moon-Saturn conjunction in Cancer.

A third important and highly destabilizing aspect was the hidden, inofficial challenge from the Mars – Neptune conjunction near 18° in the sign of Pisces a major factor for corruption and secret manipulation in a mirrorpoint opposition to the 10°Libra coordinate of the central government.

The Mexican Revolution of 1910-1920 or Mexican Civil war had radically transformed Mexican political culture and government. It led to the liberal and highly progressive Constitution signed on February 31 1917  “… the first such document in the world to set out social rights, serving as a model for the Weimar Constitution of 1919 and the Russian Constitution of 1918.” (wikipedia article)

In the chart for the signing of the constitution a Mars – Uranus – Sun conjunction in creative, innovative, holistic, rebellious air sign Aquarius the sign of emancipation, self-finding, socialism and revolution marked the attempt to liberate the poor and lower classes and create a futuristic and long lasting (fixed sign) visionary concept for a modern society.

The birth or foundation charts for Mexico City

For the scientific discussion on precise historical data about the arrival of the Aztecs and the foundation of their tenochtitlan compare: The fifth sun, with ancient Mexican history and astronomy.

According to the Aztec tradition Tenochtitlan supposedly the first large settlement at Mexico City was founded on 20 June 1325 on an island inside the shallow Lake Texcoco that covered much of what is today the city area. There is archeological evidence of the existence of older settlements.

The planetary transits of June 1325 show no exact aspects through to the astrogeographical coordinates of Tenochtitlan/Mexico City. The fact that Neptune (at 20°Sagittarius) had been transiting the 14°Sagittarius coordinate of the city for between 3 and 6 years before the supposed foundation date could indicate that the Aztec rise to power in the area was a consequence of destabilization among the local population rather than a complete new start. even more so because Saturn had been transiting in opposition to Neptune and Tenochtitlan shortly before the supposed foundation date.

The astrological chart for the moment of the conquest of Tenochtitlan and foundation of the Spanish City of Mexico reveals an extremely intense resonance of the transiting planets with the astrogeographical coordinates of the place.

Jupiter conjunct the 15°Sagittarius resonance coordinate of Tenochtitlan and Madrid

One of several extremely intense planetary transits of the astrogeographic positions of the former capital of Montezuma and of Madrid at the same time was the “Return transit of Zeus” aka Jupiter – the planet of victory iover 14° in Sagittarius exactly conjunct the parallel astrogeographic coordinate of Tenochtitlan and Madrid at 14° Sagittarius.

Jupiter was in exact grand trine with Venus in Leo the sign of royalty and the North Node in Aries the sign of warfare. This coincidence  emphasizes the intense energetical focus on the town on that day describing the attack as carried out in a highly auspicious moment. The fact that Jupiter did not effect luck to the defenders but to the invaders here – supports the assumption that the international role of Spanish culture is ruled by Jupiter´s own sign Sagittarius.

As a chart of the Fall of Tenochtitlan: it came at a moment when the Moon at 11° Capricorn was “fatally” conjunct Pluto the planet of trauma, pain, defense, foreign control, fight for dominance and power at 9° Capricorn in exact square to the 10°Libra astrogeographical coordinate of Tenochtilan delivering an intense astrological description of the threat to Aztec society and culture through the Spanish invasion.

As a birth Chart for Mexico City II: the Spanish occupation of Tenochtilan and the foundation of modern Mexico City on 13 August 1521 calculated for sunset dogmatic and deadly influence of the spanish gold hunt and catholic dogma  in the form of a square to the Aztec religion and culture whose significator is the astrogeographic coordinate in Libra here. The ideological impact of Pluto in Capricorn can also be observed in the extinction of the open pantheon of the colorful aztecs gods with the 10°Libra resonance of Tenochtitlan as an indication of a religion of angels and other celestial beings) by the narrow-minded brutal absolutism of the monotheist dogma of the Spanish state cult and pseudo-religion (Pluto in Capricorn).

The Pluto square to Tenochtitlan has to be examined as the definite astrogeographical image for the extinction of 90% of the indigenous population through the brutality of the Spanish occupation and another even more dangerous factor: the arrival of the Eurasian-African pool of virus diseases unknown to the Americas.

The Population collapse in Mexico has to be investigated as a consequence of the last Pluto-Saturn conjunction that occurred on 13 January 1518 in Capricorn before the 12 January 2020 Covid 19 conjunction.

At the same time an interpretation that seeks a critical review of the status quo of Aztec culture might consider in how far Plutos square position represents the events as a return of the feathered serpent Quetzalcoatl with Pluto as natural indicator of serpents.

Among the most frequently heard superstitions is the (roman catholic) assumption that the destruction caused by the invasion of the Spanish “culture” that killed 90% of the indigenous population in the whole of North and South America occurred as a consequence of the negativity of the slavery system and the cult of human sacrifice habitual to the indigenous high cultures namely the Aztecs, Maya and Inca.

Compare my articles on the astrogeography of Peru, Cuba and the US Pluto Return.

The first landing of the Spanish invaders through the Juan de Grijalva expedition in the Tabasco region of Mexico on June 19, 1518 was followed by the Spanish conquest of the Aztec Empire under Hernan Cortés between 1519 and 1521.

These were the two initial steps in the colonization of the whole of both the North as well as the South American continent with the Saturn-Pluto conjunction of 13 January 1518 as its initial astrological event.

The Juan de Grijalva Expedition had embarked from Cuba to conquer the North American continent on May 1, 1518 with Pluto at 6°Capricorn in exact opposition to the astrogeographical resonance coordinates of Washington at 6°CAN – 27°LEO.