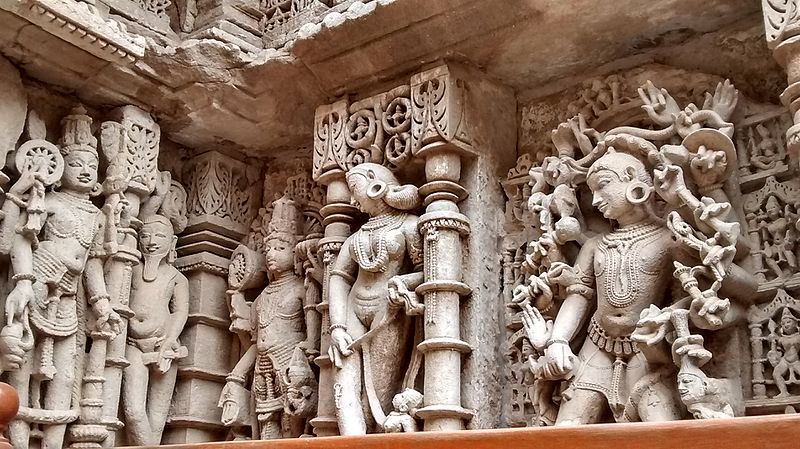 Related articles: Virgo as the sign of laundries & self-protective adaptation at San Francisco`s Chinatown, Astrology & Architecture: Box-like forms in Virgo, The Maya goddess Ixchel and her main Temple in Taurus, The Pyramid of Kukulcán in Chichén Itzá,

Rani ki Vav is an intricately constructed stepwell situated in the town of Patan in Gujarat built as a memorial to an 11th-century king Bhima I by his beloved wife queen Udayamati. It is located on the banks of Saraswati River. The stepwell was later flooded by the nearby Saraswati River and silted over until the late 1980s. When it was excavated by the Archaeological Survey of India,

Astrogeographical resonance degrees of the construction site for morphogenetic field level 4 (exact position) which describe the energetical topics of the site itself: one coordinate is located in solid, fixed earth sign Taurus the sign of the earth, grounding, roots, agriculture, food production, fertile land, the water of the earth element, cows and cattle.
Taurus relates to the attractivity of the site and its role as a local energetical centers, town center and/or market place. The 2nd coordinate is in self-protective, careful earth sign Virgo the sign of precaution, careful planning, health, medical treatment, doctors, self-cleaning , strategical planning. hindu and yoga culture, storing goods. Virgo relates to the precautions taken to protect the well from drying out, keep the water clean and use its water for washing. Virgo relates to the administrational measures taken to control and protect the water.

Most of the 800 elaborate sculptures inside Rani ki vat are in devotion to Vishnu, in the forms of the Desavatars – the 10 incarnations of Vishnu: Kalki, Rama, Krishna, Narsinh, Vaman,  Varahi and others representing their return to the world. Other sculptures show Nagkanya, Yogini beautiful women and Apsaras showcasing 16 different styles of make-up,