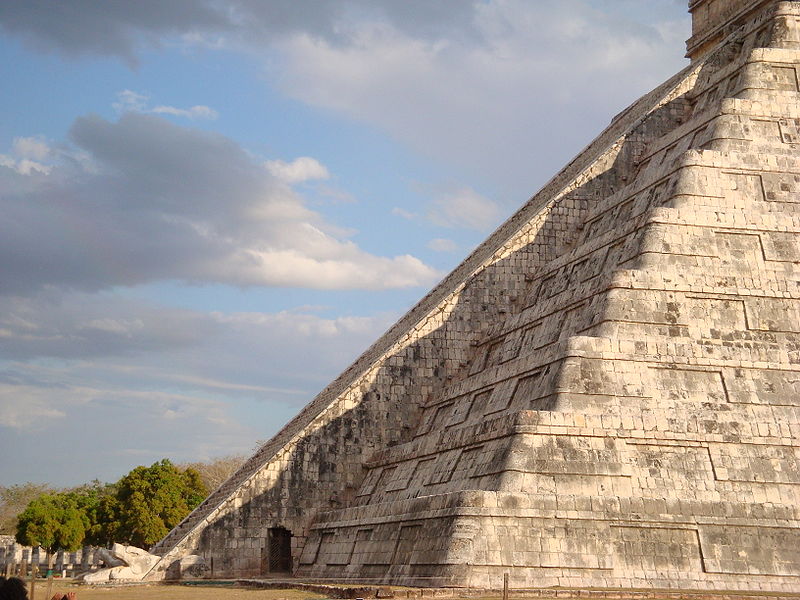 The Pyramid of Kukulcán in Chichén Itzá. Astrology & Sacred Sites: the astrogeography of the magical pyramid of the feathered serpent.

Related articles: Aquarius as the corresponding sign of Maya culture, The Maya Ruins at Palenque in, Templo Mayor in Mexico City, The Great Pyramid of Giza, The astrogeography of Mexico City, The Acropolis temple in Virgo with Aquarius.

The Pyramid of Kukulcán in Chichén Itzá

The pyramid of Kukulcán (or El Castillo) in the center of the temple area of in Chichén Itzá was built during the post-classical period of Mayan culture between 650-1050 AD. It is dedicated to the serpent deity Kukulcán which is also famous in several Mesoamerican cultures where it is known as the Feathered Serpent Deity .

According to the wikipedia article: “The double symbolism used in its name is considered allegoric to the dual nature of the deity, where being feathered represents its divine nature or ability to fly to reach the skies and being a serpent represents its human nature or ability to creep on the ground among other animals of the Earth, a dualism very common in Mesoamerican deities.”

In regard to the astrogeographical coordinates of the Kukulcan Temple at Chichén Itzá the dualism of the feathered serpent lies in its ability to creep on the ground with the other animals relates to the temple´s position in earth sing Virgo the sign of being subject to earthly conditions – while the feathered aspect relates to the position in Aquarius the sign of the sky, heaven and the capacity to fly. For this interpretation of the issues at work between Virgo and Aquarius compare my article on the Angel of the North sculpture.

The so-called “spectacle of the feathered serpent (Quetzalcoatl) occurs here each year on the equinox days March 21 and September 23. On these dates “…the shadows from the corner tiers slither down the northern side of the pyramid with the sun’s movement to the serpent’s head at the base.” (wikipedia). This is a clear indication that the whole pyramid was placed here as a calendar building.

Astrogeographic position for morphogenetic field level 3 which describes how the whole of the temple area at Chichen Itza is embedded in the land: The construction site is located in the constellation of earth sign Virgo with the air sign Aquarius.

The astrogeographic position in spiritual air sign Aquarius the sign of the sky and heaven stands for the topic of connecting earth and sky. Aquarius so stands for the fact the place of worship at Chichen Itza is a place under the open sky and not a closed up chamber, dark room or hidden cave underneath the pyramids.  Aquarius indicates that it is the tip and not the inside of the Pyramid of Kukulcán that was the sacred and energetic ritual center. In regard to the worshiped deities Aquarius stands for gods of the sky and heaven, strong winds, lightnings and thunder,  Aquarius the eleventh sign is seen as the sign of the appearance of the stage of humans among the 12 signs of the zodiac (zoodiac). Therefore Aquarius could to some extent could suggest human issues like emancipation from slavery, rebellion against a certain priest caste or the replacement of one, inspiration, purification, self-finding and abstraction as central topics of the Kukulcán pyramid. And apart from all that Aquarius could also relate to the enormous height of the pyramid as well as its significance as an architectural innovation for the city of Chichén Itzá.

Aquarius plays an important role in the processes of reorientation,  in society and religion. This can be understood from the important role of such temple sites in Aquarius as Akhenaten`s Temple of the Sun God Aten built to replace the traditional gods and established priest castes of Egypt and the mothership of Gothic cathedrals Our Lady of Chartres.

The second coordinate here lies in the first degrees of self-protective  earth sign Virgo the sign of reason, the harvest season, storing goods and and the spiritual entities of plants, health and nature in general. Virgo so stands for a practical approach to the understanding of the meaning and function of the temple. It stands for the function of the place and the ritual worship here in regard to strategical planning, securing resources and health protection. Virgo represents the opposite sign of Pisces the sign of mystification, the dream world, irrationality, illusion and . As such Virgo opposes the typical reflex in Pisces of seeking personal (mental and emotional) contact with the spiritual plane as for example in Buddhism (compare: The site of Gautama`s  illumination). In this function Virgo does not stand for religion in the sense of re-connection with spirituality but for a religious belief based on reasonable or economical considerations, security issues and anxiety about the future in the first place. It can so be concluded that the magic worked by the priests might have been primarily directed at earthly concerns such as provisions for the planning of future crops and preventing droughts, earthquakes or epidemics. Pisces on the other hand as the sign of intoxication would be directed at the illusion or opium for the people effect in the first place. On a psychological level this could explain why a worship that relies on the efficiency of the ritual magic worked at the temples could come to a point where it depended on the most severe form of sacrificial worship: the sacrifice of humans.

From the fact that one of the coordinates falls in Virgo it may be concluded that the pyramid was not built right on an energetical source of spiritual energy in the first place like is the case with many temples worldwide. Virgo could rather mean that the energetical center of the temple area is to be found in the immediate vicinity of the site. Virgo is an indication that the cult is related to nature`s spirits and entities. For the role of earth sign Virgo compare: Templo Mayor in Mexico City, Great Pyramid of Giza, Valley of the Kings, Virgo and Aquarius – “Angel of the North”

The feathered serpent of Xochicalco

Another major Mayan temple of the feathered serpent is the Pyramid of Xochicalco located 70 km south of the capital Mexico City. The word Xochicalco means “in the house of flowers”. The site has an archaeoastronomical installation for exactly determining the solar period between 30 April (10°Taurus) and 15 August (23°Leo).

Astrogeographic position for morphogenetic field level 3 which describes how the whole of the temple area at Xochicalco is embedded in the land: like Chichen Itza the site too has one resonance coordinate in earth sign Virgo the sign of reason, health, medical treatment, protected places, protection of nature and spiritual entities related to plants, herbal medicine, gardening, science of agriculture and the harvest season. The 2nd coordinate is located in highly magnetic, centralist, royal fire sign Leo the sign of the sun, light, power stations, magnificence, the heart and of places dedicated to royal state cult.

The position in Leo the sign of the Sun is symptomatic of calendar buildings as the Sun is the natural “creator” of the rhythms and cycles of days, months and years. Compare also the position of the Temple of the Sun Stone Intihuatana in Leo with Capricorn.