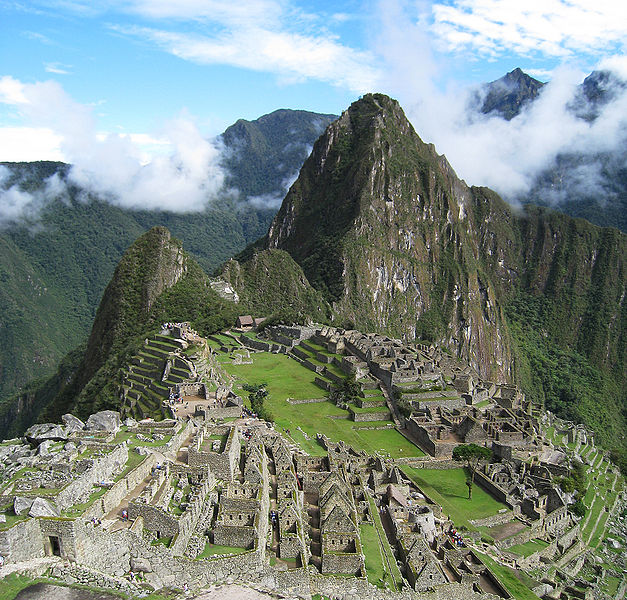 Leo and Capricorn – The Sun Temple of Machu Picchu. Astrology, history and magical places: a short take on the astrogeographical position of the sacred mountain abode of the Inca kings.

For Peru compare:  The origin of the Inca Gold – Pyramid City of Túcume,  The Sacred City of Caral, Viracocha`s Trident in Sagittarius and Virgo, Lake Guatavita the site of El Dorado in astrogeography,

Leo and Capricorn – The Sun Temple of Machu Picchu

The Inca city of Machu Picchu (meaning: “old mountain”) was built in the 15th century AD on top of a narrow mountain ridge in Peru at an altitude of 2650 m. Machu Picchu was built as a royal refuge but the fact that it contains a highly developed temple area with the Sun stone Intihuatana (“place where the sun is bound”) and a Sun, a Moon and other temples could mean that it was also planned as a holy city and center of the state religion.  wikiquote: “Most archaeologists believe that Machu Picchu was built as an estate for the Inca emperor Pachacuti (1438–1472).”

Astrogeographical position of Machu Picchu for morphogenetic field level 3 which describes the atmosphere, energetical topics and topography of its construction site amd how it is embedded in the land:  Machu Picchu is situated in the constellation of highly magnetic, centralistic, royal fire sign Leo the sign of the sun, light and emotional self-centeredness with highly defensive, conservative, traditionalistic, exclusive earth sign Capricorn the sign of mountains, rocks,  stability and efficiency of government institutions, control, rules and regulations. While Leo is the sign of the Sun, Capricorn the sign of stones and rocks stands for the idea of binding and grounding the Sun here.

Capricorn corresponds to the fact that the site is located in a highly prominent position on top of a mountain ridge  suggesting that the place was chosen for strategical reasons. This location makes Machu Picchu fully exposed to weather conditions and also functions as a natural fortress. From an astrological point of view any place located in Leo is a site of natural rulership and resonance of the Sun and solar deities. For this reason the site appears to be in harmony with the topics of a Sun Temple and the famous Intihuatana sun observatory. The location so has to be considered as an auspicious site for a temple for the worship of the Sun. As one of the two solstice signs Capricorn marks an important turning point in the yearly cycle of the Sun. It therefore directly relates to the function of the sun observatory here as a central government institution for calculating the calendar days. Furthermore Capricorn represents a highly auspicious aspect for a site that hosts government buildings. Leo on the other hand is to be judged as symptomatic of places that host royal buildings. In fact Leo is itself the sign of royalty and kinghood and therefore supports the representative function of royal buildings in Leo.

The astrogeographical positions in Capricorn and Leo could indicate that the site had been destined as a center of the official state religion. Compare the functions of the Karnak Temple at Luxor,  Tian Tan Temple in Beijing,  Pashupatinath Temple at Kathmandu,  National Cathedral in Washington as places dedicated to the state religion in Capricorn.  For the position in Leo compare the position of the temple city of the sun god Aten built by Akhenaten and of the Grand Royal Palace & Great Temple of the Emerald Buddha in Bangkok .

The Intihuatana Stone in astreogeography

Each year on October 27 and on February 14 at noon the Sun stands precisely above the measuring pillar of the Intihuatana Stone so that it throws no shadow at all.

Astrogeographic position of the magic solar calendar stone Intihuatana for the smaller field level 4 which explains the atmosphere and energetical topics of the sun stone itself and how it is embedded in the whole of the Machú Picchu site:  the site of the Intihuatana stone has one coordinate in  highly attractive, energetic and magnetic royal fire sign Leo the sign of the Sun. And for both the astrogeographical field levels 3 as well as 4.  Leo indicates that Inthihuatana is not a mere instrument for time measuring but also a site for the worship of the Sun and other solar deities along with light itself. The 2nd coordinate lies in the reasonable, calculating earth sign Virgo a plausible indicator for an installation for calculating sowing and harvest seasons. Virgo as the opposition sign of Pisces the main indicator for the spiritual plane in case of temples stands for earthbound aspects of spirituality as for example yoga culture, self healing, psychology and for places related to spiritual entities of plants such as elves and dwarfs. And Virgo also represents the sign of the faculties of gardening and also of agricultural science.