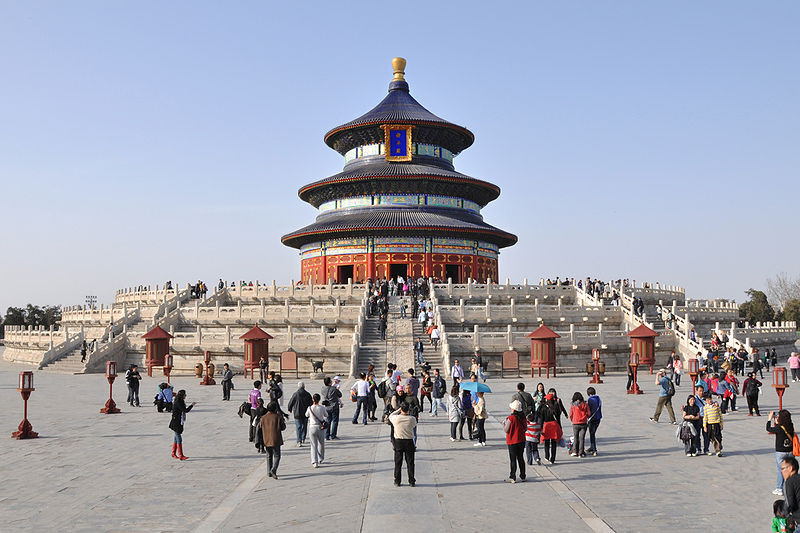 Related articles:  Astrogeographic position of Beijing – transits for the capital of China, Sagittarius and Capricorn – The Forbidden City in Beijing,  Astrology and Sacred Sites: The Sacred Mountains in China, White Horse Temple – the first Buddhist Temple in China, Astrology and Sacred Sites: The Longmen Grottoes at Luoyang, The Legendary Shaolin Monastery,  The Lucky Coin Structure in Sagittarius,

The Temple of Heaven, literally the Altar of Heaven called Tiantan is a large temple complex in the chinese capital of Beijing. The temple is the site of the “Hall of Prayer for Good Harvests” constructed from 1406 to 1420 during the reign of the Yongle Emperor, who was also responsible for the construction of the Forbidden City in Beijing.  where the emperors of the Ming and Qing dynasties anually prayed and sacrificed for a good harvest for the whole of the chinese empire.

Astrogeographic position of the Tian Tan Temple for morphogenetic field level 3 which describes the atnmosphere, energetical topics and function of the temple itself: The site of the “Hall of Prayer for Good Harvests” inside the temple complex is located in the sign constellation of the two earth signs Taurus and Capricorn.
The position in Taurus the sign of the earth, grounding, growing roots, possession of land and financial is the most important astrological resonator of agriculture and food production, Therefore it represents an ideal site for the rites of sacrifice for a good harvest and may be typical for the site of an earth deity. The name “Temple of Heaven” at first glance might appear as a contrast to the purpose and function of an earth or fertility rites temple. But apparently the meaning of the name refers to a concept where heaven and the skies are  seen in food supply. The semantical antagonism of temple of heaven at an temple of an earth deity suggests the idea that the emperor`s feng-shui advisors selected the site in an attempt to include both sky and earth, weather and the fertility of the ground in the sacrifice here.
The position in solid, conservative, traditionalist earth sign Capricorn falls on the first degree of the sign and right next to the cardinal divide at 0°Capricorn the point of the winter solstice. In the astrological house system this degree represent the Medium Coeli the midheaven relative to the highest position of the Sun on the day for which a horoscope is cast. There may be other ways to get into heaven. The entrance via the first degree of Capricorn stands for the entrance into heaven from the perspective of the sequence of the 12 houses as seen material (Aries, Taurus, Gemini) through the emotional (Cancer, Leo, Virgo) and the mental plane (Libra,Scorpio, Sagittarius). This is how the position of the temple in earth sign Capricorn in its role as the earthly fundament for the sky resonates with a “Temple of Heaven” and not of the earth here. The winter solstice is the birthday of the sun when days start getting longer in the northern hemisphere. It puts an end to the shortening of days and the darkening period of autumn. It therefore naturally relates the temple site to the function of a sun temple and sun observatory.

The position of Tianmen Temple of Beijing at 0°Capricorn directly resonates with the same position of “Heaven`s Gate” on top of Tianmen Shan ( Heaven’s Gate Mountain) one of the Sacred Mountains of China in the northwestern part of Hunan Province which too is located on the degree of the winter solstice. Read my articles: Heaven`s Gate on the point of the winter solstice and The Sacred Mountains of China in astrogeography.

Capricorn as the sign of the ruling classes, the stability of government institutions and historical tradition as their fundament explains the importance of the temple as a central government institution dedicated to the stabilizing function of the official state cult. The annual fertility rites were an important governmental act of the emperors that served in maintaining the legitimacy of their rule.
The position of the central government temple for fertility rites is typical for temples of highest importance such as the Karnak Temple in Luxor, Egypt which served as the main temple for the periodic fertility rites performed by the Pharaohs for the whole of Egypt. Others are: Pashupatinath Temple in Katmandu and Washington National Cathedral.

The so-called circular mound altar 700 m to the south of the main hall of prayer was built in the 16th century in the style of a superlarge compass and sun observatory. Its four entrances are located in the four directions.