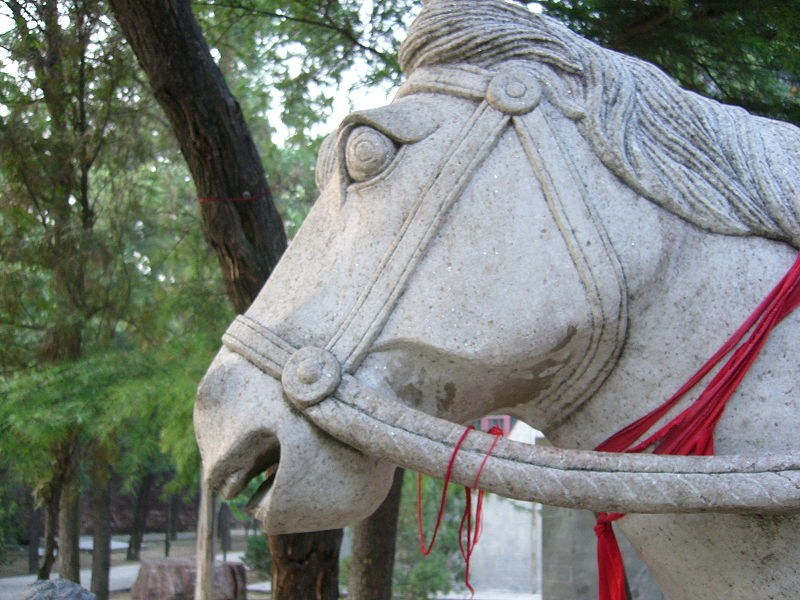 Related articles: Pisces and Pisces – The Mahabodhi Tree in Bodh Gaya, Buddhist Stupas in Astrology, The Mahabodhi Temple in Bodhgaya, A Monumental Buddha Maitreya Statue in Scorpio, The “Spring Temple Buddha”, The Emerald Buddha, The Porcelain Pagoda of Nanjing, Lying or Flying – The Controversy between Taurus + Aquarius, Cancer and Virgo – Jokhang Temple in Lhasa, The mystical buddhist university of Nalanda, The Longmen Grottoes, The Legendary Shaolin Monastery

The White Horse Temple – The first Buddhist Temple in China

The legendary White Horse Temple at Luoyang, China is the first Buddhist temple in China. It is reported to have been established in the year 68 AD under Emperor Ming in the Eastern Han capital Luoyang.

The legend of the arrival of Buddhism in China:

“Emperor Ming had a dream vision about a Buddha who established Buddhism and send 2 emissaries to search for Buddhist scriptures. They encountered two Indian Buddhist monks in Afghanistan, and persuaded them to join them and return to China, bringing their book of Buddhist scriptures, relics and statues of Buddha with them on two white horses.  On their arrival the king built a temple in their naming it the White Horse Temple or Baima Temple, as an appreciation of the two white horses that had carried the two monks. The monks resided at the new temple and here they translated the Buddhist scriptures into the Chinese language. The Buddhist religion prospered from here and with the arrival of Bodhidarma, another monk from India in the 5th century, Chinese Buddhism evolved, spreading to other countries.” (quoted from the wikipedia article)

Astrogeographical position for morphogenetic field level 3 which describes the energetical topics and atmosphere of the temple together with the surrounding area: for field level 3 which includes the whole of the White Horse Temple area the site is located in self-protective earth sign Virgo the sign of yoga and meditation culture, celibacy, reason, monkhood, self-cleaning, health, self-protection, fasting and a major indicator for meditation techniques. As the indicator for indian (hindu) culture Virgo relates the temple site to the cultural exchange between China and India, Through buddhism the indian meditation culture and with the buddhist scriptures also the indian (Sanskrit) language exerted an intense influence on the culture of religion in China.

The 2nd coordinate of the White Horse Temple is located in highly alert, self-defensive, mental water sign Scorpio the sign of fortresses, sculpting, learning by watching and copying,  mental and social hierarchies, caste systems and in religion an indicator for dogma and ideologies. In its role as the sign of sculpting and imaging Scorpio is the indicator for the emblematic white horse statue as the symbol for the initiation into Buddhism.

Astrology and Sacred Sites: The Longmen Grottoes at Luoyang

Luoyang  is also the site of one of the finest examples of ancient chinese art: the Longmen Grottoes.

Astrogeographic position for Field Level 3 which describes the whole area of the Longmen Grottoes:  one coordinate of the site is located right next to the cardinal divide between practical air sign Gemini the sign of signposts, signs, language, communication, learning and technology and emotional water sign Cancer the sign of river beds and indicator for the location of the site right next to the river. The 2nd coordinate lies in creative, innovative spiritual air sign Aquarius the sign of the sky, heaven, self-finding, paradise, flying, abstraction, inspiration, emancipation and self-liberation.

Neither Gemini nor Cancer are astrological or astrogeographical indicators for decoration and ornamentation as would be Libra and Sagittarius. This means that the sculpting project is not to be seen as for the purpose of decoration in the first place as in the case of a site like for example the Buddhas of Bamyan (located in Libra with Scorpio). Gemini as the sign of learning and teaching could indicate that religious and/or political education, practical training of sculptors and development of techniques were major issues here. The historical role of Buddhist religion lay in its potential to allow a dogmatic impact similar to the later monotheist religions (Jewish, Christian and Islamic religions). This potential had been made use of in a number of countries since the times of the reign of Ashoka over India between 262 and 223 BCE for the purpose of establishing a state religion to hold the country together. Through Gemini´s as the sign of technology, communication, manipulation and propaganda its resonance with the place could be a hint at the function of the sculpting projects as an element of indoctrination of the local population.

In regard to the excessive and continuous duplication of the idea of creating sculptures and the exploitation of the ressources (rock) it is also functional air sign Gemini`s role here which is to be examined as the astrological factor to be related with the inflationary tendencies of the sculpting projects.

Gemini may not be an indicator for Gautama Buddha himself. But in several ways I have observed it as a major indicator for Buddhism. As Buddhism does not relate to the concept of god like other religions it is related to the assumption of superiority of a godless religion. And Buddhism is being instrumentalized widely for neglecting god. The reflexes that can arise from a supposed superiority of the intellect over mystification may be practically useful and good for many purposes. But the mental belief in illumination can sometimes limitate and degenerate the spiritual reconnection to the ideal of technical solutions for the problems of mankind. Such concepts of the technologies of illumination are typical for many aspects of bourgeois buddhism. In astrology Gemini represents the sign of intelligence. And as the word “Buddhi” literally means “intelligence” the name of Buddhism directly relates the strife for intelligence and the main faculty of Gemini with the name of Buddhism. But of course it would be a big mistake to reduce Buddhism to it`s resonance with the realms of Gemini.

The role of Cancer in culture, art and religion is directly related to Cancer`s meaning as the sign of emotional identity and authenticity. Cancer does not depend on form and shape as other signs do. It more directly relates to the content and emotional impact of works of art and architecture. Therefore places in Cancer have the potential to reconnect the mental projections, associations, ideas, forms and habitual patterns of design on which works of art are based with the emotional plane by reflecting their impact on personal emotionality. Not only is Gautama Buddha assumed to have been born with a Cancer ascendant. The relation of Cancer with the Buddhist religion allows the reflection and resonance of the supposed enlightenment within the reality of the individual emotional body. Therefore Cancer surely is a plausible corrective for functional and mental illumination. For the role of Cancer in Buddhism compare also: Jokhang Temple in the Tibetan capital Lhasa.

The Political and Religious connotations of the position in Aquarius

The second coordinate of the grottoes is located in creative, innovative, spiritual air sign Aquarius the sign of the sky, self-finding, religious quests, the casteless (outcast) status of monks and the reconnection with the spiritual origin of life. As the Buddha was a monk and castelessness his status the astrogeographic position in Aquarius indicates an intense resonance with the aspect of the spiritual quest through castlessness as an original motif in the legends about Buddha`s life though not really of later Buddhism.

The astrogeographic coordinate in Aquarius may be interpreted as an indication for the attempt of the local kings to replace older religions,  fight back established priest castes and replace older dynasties related to older religions. For this role of Aquarius compare the astrogeographic position of the revolutionary new capital of Akhenaten:   Aquarius and Leo – The Capital of the Sun God Aton. Compare wikipedia article: “The earliest history of the creation of Longmen Grottoes is traced to the reign of Emperor Xiaowen of Northern Wei dynasty when he shifted his capital to Luoyang from Dàtóng.”

Whether or not and in how far Aquarius can be discussed here as a potential indicator for the aspects of creativity in the works of art is an extremely interesting and important question. First of all there are several aspects to creativity which when confused make a clearer understanding and definition of the subject impossible.

Aquarius as an air sign and through it`s role for the spiritual plane is the deliverer of inspiration (information) from Pisces the realm of the unconscious, timeless and the full potentials of the unlimited resources for solutions. The water bearer transports the waters of inspiration from the spiritual plane (Pisces) to the giver of forms for earthly manifestations (Capricorn). Therefore it is Aquarius`s role in art to transport the inspiration from the plane of the abstract to the plane of specification.  Therefore Aquarius could be a valuable indicator for the initial phase of such sculpting projects of course.