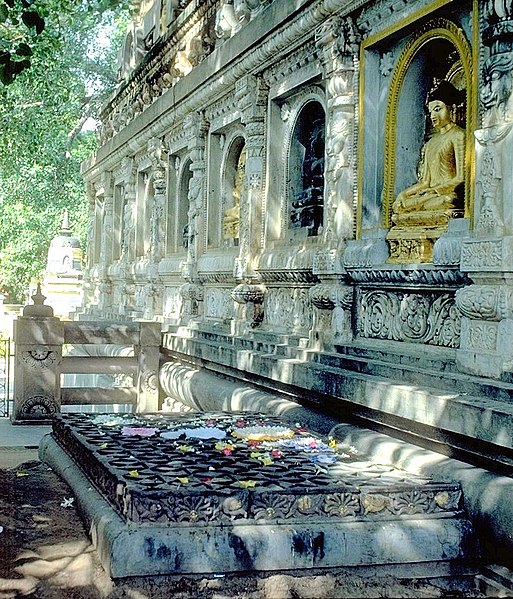 Related articles: Samye Gompa the oldest monastery in Tibet, The Mahabodhi Temple Tower in Aries, Buddhist Stupas in Astrology, The White Horse Temple – The first Buddhist Temple in China, A Monumental Buddha Maitreya Statue in Scorpio, Mount Kailash in Cancer with Capricorn, The mystical Buddhist university of Nalanda in astrogeography, The Longmen Grottoes at Luoyang, The Temple Mount in Pisces with Taurus, Jesus` Birth Place in Pisces, Birth Place of Krishna in Pisces

Pisces and Pisces – The Mahabodhi Tree in Bodh Gaya

According to tradition, the sacred Mahabodhi Tree in Bodh Gaya, India is the place where Gautama Buddha attained enlightenment after meditating there for 7 years.

Astrogeographic position for morphogenetic radius/field level 3 (surrounding area), which explains the energetical qualities, atmosphere and field resonance of the surrounding area of the Bodhi tree and the temple of enlightenment: both resonance coordinates of this site are located in mystic spiritual water sign Pisces, the sign that stands for the perception of the unconscious and the spiritual aspects of human perception. As the sign of the spiritual plane Pisces stands for the communion and re-connection with the divine and spiritual in all of it`s aspects. Pisces therefore represents the ideal of a temple site as such. A coordinate of a place in Pisces also indicates that the place has the potential of being energetically independent from the influences of the environment and from the routines of everyday life. In this sense it may be well imaginable how and why Gautama chose this place and rested here to meditate for 7 years without letting himself be distracted by the powers of seduction and illusion.

In astrological literature Pisces is often equated with Christianity. But the constellation here shows that Pisces should be understood as representing more fundamental aspects of spiritual experience and religion than just the symbols or ideologies of one particular creed or culture. Thus places in Pisces may be considered as really ideal sites for meditation and communion with the divine as well as for building temples.

Whether or not the place is in fact authentically the site of Gautama`s illumination can not be proven. But it has to be considered that places in Pisces often have the tendency to attract, allow and invite mystification of facts, history, legends and mythology. For this aspect of Pisces compare my blogs  about:  Olympus Pisces and Pisces – Glastonbury Abbey and The three steps to Mount Olympus.

Astrogeographical position for morphogenetic field level 4 (exact position) of the Mahabodhi Tree and temple which explains the topics of the site itself: the site has one resonance coordinate in dynamic, male fire sign Aries the sign of action, speed, warfare, ignition, erection and mobilization. The 2nd coordinate is located in service orientated air sign Libra the sign of harmony, balance, beauty, symmetry, openness, love, relationship, stage performance and presentation and of angels.

The positions in Aries (action, sports) and in Libra (openness, relationship) do not indicate a retreat for meditation in the first place but rather a meeting place and gathering site. It may therefore be speculated whether the actual place chosen by Gautama Buddha for undisturbed meditation could be a nearby place.