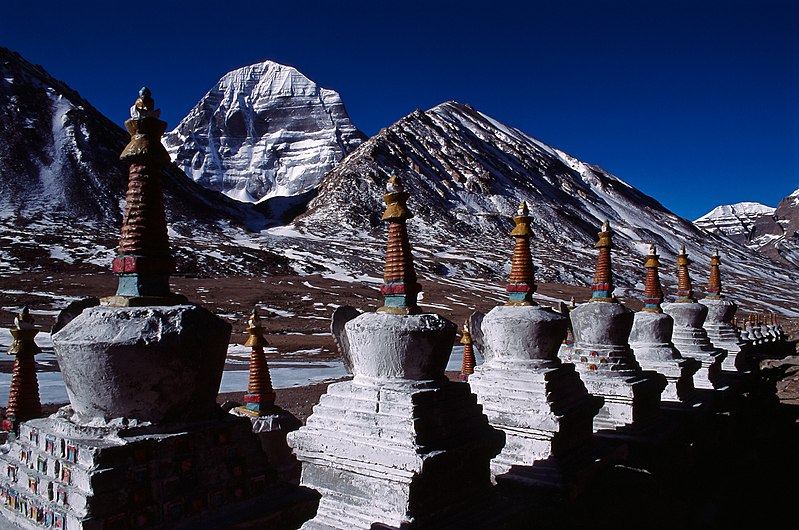 Related articles:  The Sites of the 12 Jyotirlinga in astrology,  The Shakti Peetha shrines in astrology, The source of the river Ganges and the Devprayag sangam in Cancer-Scorpio, Sri Amarnath Shiva Lingam in Aries with Cancer, Shiva in two water signs,  Mount Kailash in Astrogeography,  Cancer with Scorpio: the birth place of Mahavatar Babaji,

Mount Kailash in Cancer with Capricorn

Mount Kailash is the mythological seat and home of the Hindu God Shiva, the destroyer of ignorance and illusion,  It lies near the source of some of the longest rivers in Asia: the Indus River, the Sutlej River (a major tributary of the Indus River), the Brahmaputra River, and the Karnali River (a tributary of the River Ganga). It is considered a sacred place in four religions: Bön, Buddhism, Hinduism and Jainism.

Astrogeographic position of the peak area for morphogenetic field level 3 which describes how the area is embedded in the whole mountain range: the summit itself falls on the first degree of history-orientated, solid, earth sign Capricorn the sign of mountains, rocks, governments, austerity, asceticism (tapasya), rulership, self control, responsibility. The first degree in Capricorn the sign of control is the degree of the head of the government and chieftain of a tribe. It is the position of the Sun during the winter solstice and therefore marks the beginning of winter, the end of the darkening of the days in the northern hemisphere (in Sagittarius) and therefore the birthday of light. The first degrees of Capricorn are seen as the point of excorcism of subjective thinking, judgement and illusion.  Therefore Shiva´s position here relates to his role as the destroyer of illusion and the ruler over the world of demons. The 2nd coordinate of the peak area is located in emotional water sign Cancer the sign of feeling at home, motherhood, fertility,  family life, springs, rivers and emotional individuality and authenticity. Together with Scorpio Cancer is one of the two most important astrological indicators for the hindu deity Shiva. Cancer is also extremly important for the energetical, spiritual and physical qualities of Mount Kailash in regard to the importance of the mountain range as the site of the springs of Indus and Brahmaputra Rivers.

Another example for a highly important temple dedicated to Shiva located in Cancer is the Kailash Temple in Ellora:

Kailashnath Temple dedicated to Lord Shiva is one of the 34 famous Ellora Caves, Aurangabad, India. The whole temple was cut out of one rock. between 756-774 CE.   Astrogeographic position for morphogenetic field level 4 which describes the atmosphere and energetical topics of the temple itself: located in emotional water sign Cancer sign of the moon, caves, motherhood, fertility, pregnancy and most important sign of sexuality.  There is a long list of mportant examples for the resonance of topics related to fertility and sexuality, Kailash and Shiva with water sign Cancer. The Shakti Peetha Shrines and the 12 Jyotir Linga both have the majority of places in Cancer. Anyway Cancer can be considered as Shiva`s home sign – as his mythological home is the source of river Ganges. The astrogeographical positions of Gaumukh the Bagirathi source of river Ganges lies in Cancer as well as Mount Kailash in Tibet.  The Kailashnath Mahadev  statue near Kathmandu, Nepal currently the tallest shiva statue on the planet is located in Cancer too.   The 2nd coordinate of the famous Kailashnath Temple lies in highly energetic, magnetic. centralist, royal fire sign Leo sign of the sun, light, kingdom, emotional self-expression and indicator for a temple built by a king.  The combination of Leo with Cancer brings together the energies and topics  of the Sun (leo) and the Moon (cancer) – the two strongest astrological planetary factors. Therefore such places have a particularly strong stimulation of the completeness of individual emotionality bringing together darkness and light.