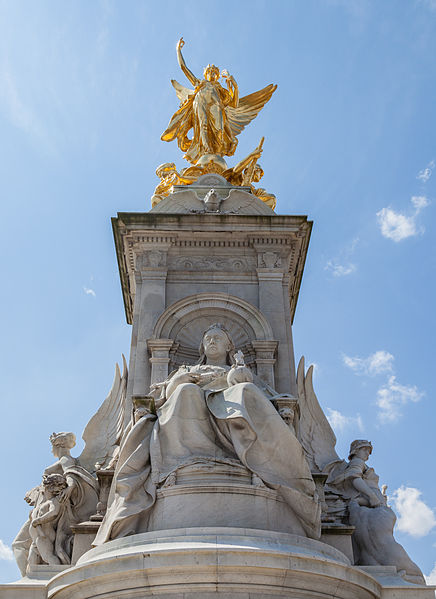 Monuments and places of the mystification of victory and success with both coordinates in Pisces: Lincoln Memorial, Mount Olympus in Pisces, The Mahabodhi Temple in Bodhgaya, Glastonbury Abbey,

The Victoria Memorial is a monument to Queen Victoria located at the end of The Mall and in front of Buckingham Palace in London. It was designed and executed by British sculptor Sir Thomas Brock (born 1 March 1847 with the Sun and 3 more planets in Pisces) and unveiled on 16 May 1911 with Mars in Pisces.

For a detailed description of the various single sculptures and embodiments depicted in the whole ensemble mostly sculpted from white marble (like Lincoln Memorial) see the  wiki article. The central statue of Queen Victoria enthroned is facing the Mall and the City of London to the north-east of the monument. The depicted embodiments are Victory, Constancy, Courage, Truth, Justice, Motherhood, Peace, Progress, Agriculture and Manufacture.

Astrogeographical position of the Queen Victoria Memorial for morphogenetic field level 4 which describes the atmosphere of site of the monument itself: both coordinates are located in spiritual water sign Pisces the sign of re-connection with the spiritual plane, the dream world, mystification, fairy tales, illusions and  temples. Pisces appears here as an ideal place for mystification and re-connection with the spiritual impacts and associations of historical and mythological figures.

The contrast with the Maria Theresia Memorial in Vienna

The Victory Column in Berlin

In my astrogeomantical field studies I first came across the element of mystification of victory and success at a site with both coordinates in Pisces in the case of the first site of the Berlin Victory Column which originally was situated at the Place of the Republic in front of the Reichstag Building but was later removed by Hitler and Speer who placed it at a site at 0°Taurus (Sun in Hitler`s birth chart) and in Scorpio. The Berlin Victory Column has a sculpture of the goddess Victoria on top as well.