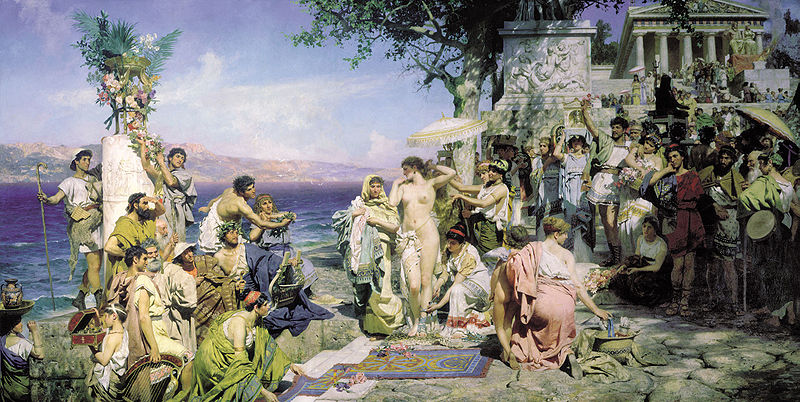 Greek Mythology: Greek Gods in astrogeographical field study. Plutos Gate between heaven an hell, The birth place of Hermes on Mount Kyllini, The birth place of Poseidon,  Oracle of Delphi, Ancient Greek oracle places, The Birth place of Zeus in Sagittarius, Mount Olympus, The Temple of the Eleusinian Mysteries, The Tower of the Winds in Athens, Temple of Neptune, Aphrodite`s Temples and Birth Place, The temple of Artemis at Ephesos

Pisces and Capricorn – The Temple of the Eleusinian Mysteries

The Telesterion of Eleusis was one of the most important and most famous mystery and initiation temples in ancient Greece. It was famous for the legendary Eleusinian Mysteries centered around the important Demeter sanctuary and the worship of her daughter Persephone (Kore). The Eleusinians Mysteries were  an important part of the official state cult of the City of Athens   Different initiation rites and mystery ceremonies were held on various occasions here every year since as early as around 1500 BC until the prohibition of the mystery cult by the Roman Emperor Theodosius I. nearly 2000 years later in 392 AD.

The roots of the cults at Eleusys by far predate the gods from the Olympian pantheon. Demeter`s role among the twelve olympian gods as goddess of fertility, plants and harvest can be understood as a possible correspondence with either Taurus or Virgo. Her presiding over the sacred law relates her with the astrogeographical aspect of the temple in Capricorn.

Persephone (Kore) was a daughter of Zeus (Jupiter) with Demeter. She was captured by Hades (Pluto) and taken to stay in the underworld as his wife. Persephone`s role as a goddess of the dead and of the three underworlds relates her to the water signs: Cancer the emotional, Scorpio the mental and Pisces the spiritual underworlds.

Astrogeographic position of the Sanctuary of the Eleusinian Mysteries for morphogenetic field level 3 which describes the energetical situation, atmosphere and topics of the temple area itself and how it is embedded in the landsacpe: The site pf the temple area lies in the combination of mystic, spiritual water sign Pisces with solid, exclusive, traditionalistic earth sign Capricorn. The combination of Pisces with Capricorn stands for the isolation of the site from the public and the combination of mystical with hierarchical aspects.

Pisces as the astrological sign of the unconscious, dreaming, sleeping, imagination, holidays and reconnection with the spiritual plane stands for the  topics of the perception of the physically invisible and spiritual plane here. The use of drugs (Ergot, Psylocybin, Datura and others)  for initiations, rituals and spiritual experience can also seen as part of the resonance of Pisces. Alltogether Pisces supports the energetical independence of places from the environment, open spaces and all topics having to do with holidays or taking a time out.

The combination of these aspects of Pisces with the reflex of Capricorn to create an exclusive and concentrated atmosphere  explains how the whole temple area was shut off hermetically from the outside world like a fortress. The participants of the initiation rites were threatened by death not to talk about their experiences. The topic of the combination of imprisonment and spirituality in the constellation of Pisces with Capricorn can also be found at the Birthplace of the Hindu god Krishna.