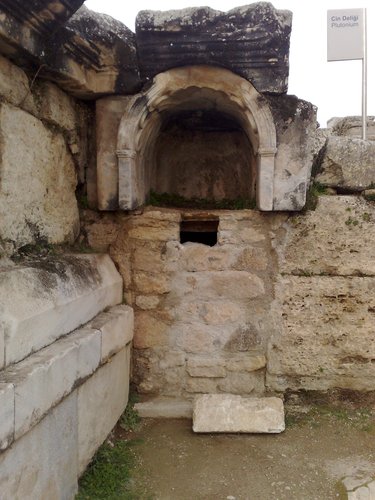 Plutos Gate between heaven an hell. The astrogeographical position of the Pluto Temple at Hierapolis (Pamukkale) in Sagittarius with Capricorn.

Plutos Gate between heaven an hell

Pluto was a later aspect or version of Hades the original god of the underworld.

They keep calling it “Pluto`s Gate” but the Plutonium at Hierapolis is a site of initiation in the first place, At least that is my conclusion from the fact that the temple site is not located in Pluto´s own sign Scorpio the sign of the underworld.

The so called “Gate to hell” at the Ploutonion at Hierapolis (Pamukkale) located below the Temple of Apollon js a cave emitting toxic gases which has been celebrated as the portal to the underworld since it was found by italian archeologists in 1965.

Astrogeographic position of the Ploutonion at Hierapolis for morphogentic field level 4 which describes the function, atmosphere and energetical topics of the temple site itself: one coordinate lies in dynamic fire sign Sagittarius sign of shamanism,  the priest castes, knowledge, philosophy. initiation rites, fire sacrifice, lava fields, the cleansing fires, cremation, fire rituals and the astrological analogy of hell. Sagittarius points at the function of the temple as a place used for initiation rites for different kinds of topics: natural cycles and time measurement, healing, self-awareness, wisdom, knowledge, philosophy, science, priesthood, Jnana-Yoga, extacy and also to experiences and knowledge related to the underworld. What i ´m trying to say is that Sagittarius does in fact include and even suggest dealing with topics of the underworld – but surely  not exclusively. A strong example of intense resonance of Sagittarius with topics of the underworld is the astrogeogeographical position of Hawaiʻi Volcanoes National Park in Sagittarius but with Scorpio the most important astrological resonator for the underworld.

The 2nd coordinate lies in solid, strict, defensive, conservative earth sign Capricorn sign of hindrances, mountains, rocks, authority, control, government institutions, calcium, bones and all topics related to the abstract meaning and higher hierarchies of the religious topics dealt with at this place. At the gate of hell Capricorn stands for the aim of gaining control over the realms of the.beings of the underworld and the readiness to separate them from gaining control over the spheres of human life and experience. Capricorn so serves as the guardian between two worlds. 0° Capricorn the degree of the winter solstice is therefore to be examined here as as a check-post at the separation between heaven and hell.

The combination of the two neighbor signs Sagittarius and Capricorn relates to the ideal of perceiving and understanding the place where human perception, aiming and intentional action (Sagittarius) meets with effective superior reality (Capricorn).