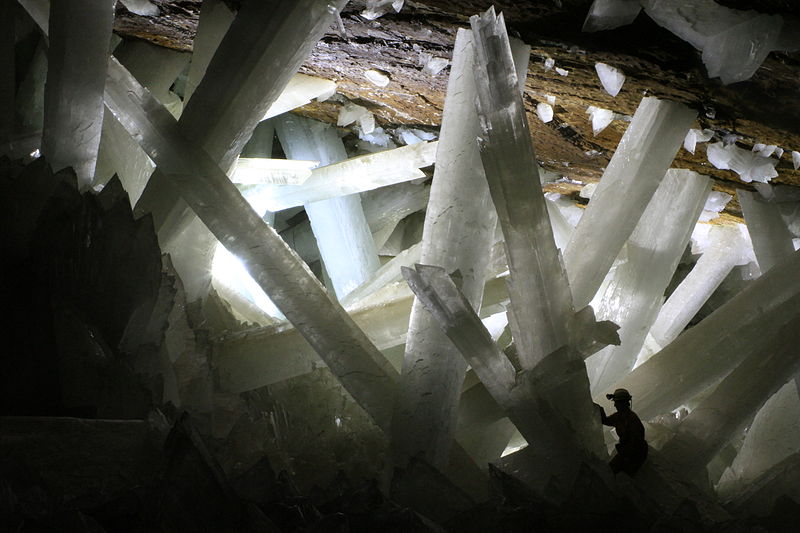 Capricorn and Sagittarius – The Giant Crystals of Naica. On the astrogeographical position of the Naica Mine in Chihuahua, Mexico.

Located in the same combination of signs are: The Tempel of Zeus in Olympia,  The Forbidden City in Beijing, St. Peter’s Basilica in Rome,  Facebook Headquarters, Capricorn and Sagittarius – Neptune as a Guardian.

Capricorn and Sagittarius – The Giant Crystals of Naica

Selenite (gypsum) crystals. up to 15 m long weighing up to 50 tons have been found in “Crystal Cave” and “Sword Cave” in the Naica Mine in Chihuahua, Mexico. They represent the largest crystals found on this planet so far. Naica Mine is a lead, zinc and silver mine.  The temperature in the mine is 58° C (136° F) with 99% humidity requiring workers to wear specialized suits with an oxygen supply to survive working in the environment.

Astrogeographical position for morphogenetic field level 2 which describes how the area of the mine is embedded in the region. Field level 2 can be examined also for conclusions about the geomorphic structures of the larger area in and around the mine: the area of the Naica Mine has one coordinate fire sign Sagittarius the sign of lava and magma fields, volcanic activities,  the cleansing fires, hell, burning sacrifice and cremation.  Compare:  Hawaii Volcanoes National Park in Sagittarius. The 2nd coordinate is located in solid, conservative earth sign Capricorn sign of rocks, mountains, calcium, bones, white color and of gypsum. Compare the examples of the White Desert, White Sands National Monument, Pamukkale basins all located in Capricorn.
The combination of Sagittarius with Capricorn has been called the “golden section” in classical astrology. This is why the constellation throws an interesting light on the aspect of the perfection of form manifested in the crystalline structures at the Naica Mine.