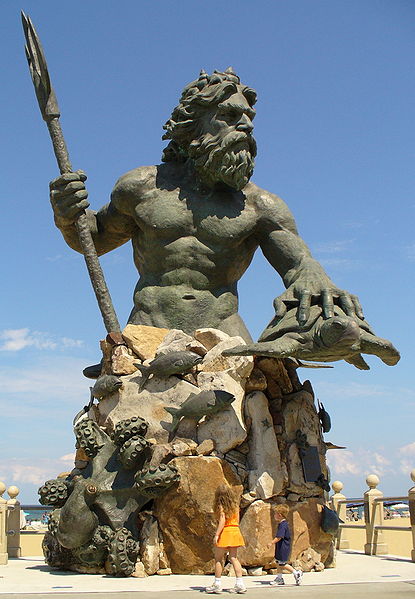 Capricorn and Sagittarius – Neptune as a Guardian. Astrology, sculptures and their function as punctuations of the landscape: Neptune on Virginia Beach

Compare: Neptune as the Guardian of a Town Hall, A Fountain of Neptune in the Signs of Mars, Neptune staking claims in Taurus, The “Little Mermaid” as a Guardian, The Merlion in Singapur as a guardian, Christ of the Abyss in Scorpio the sign of the underworld, The Waterloo Lion as a Guardian, The Guardian Fountains on Place de la Concorde, Golden Gate Bridge and the entrance into Capricorn on its south end, Fushima-Inari-Taisha and the gate at 0° Capricorn.

A sculpture named “King Neptune” by Amercian sculptor Paul Di Pascuale was set up next to the beach of Virginia Beach, Virginia on September, 30 2005 at the entrance of Neptune Park. The bronze statue is 34 foot high and rests on a fundament decorated with sea creatures. It´s face is not directed towards the sea but towards the land. This direction indicates that Neptune`s function here is not to be a representative of the world of the humans greeting the sea but to be a representative of the sea who brings the information from the oceans towards the tourists on the boardwalk and in Neptune Park.

Astrogeographic position for morphogenetic radius/field level 4 which describes the atmosphere of the construction site and the function of  the sculpture itself: The exact position of the statue has one coordinate in highly defensive,, conservative, strict, traditional earth sign Capricorn the sign of control and check-posts and a possible indicator for  the function of the statue as a guardian, ruler of the beach, envoy or ambassador.

The second coordinate is in mental fire sign Sagittarius the sign of mental understanding, knowledge, shamanism  and an important indicator for the reflex to decorate and ornament places as if in an attempt to integrate their existence into a system of understanding. Sagittarius as such is the sign of style, design, fashion and even caricature.
Neptune actually is the astrological ruler of spiritual water sign Pisces, the sign which stands for the sea and for the invisible subtle aspects of reality, imagination, illusion and mystification and thus for the realms of mythological beings (for the role of Pisces compare the Glastonbury Abbey post) . This means that Neptune is not in his own sign here but rather is in exile. Nevertheless Capricorn can also be understood to represent the cause of a representative of the realms of Neptune in the sense that it is Capricorn`s job to “protect the realms of the spiritual plane from being suppressed by mental, materialistic or personal emotional interests”.

The astrogeographic position in Capricorn hints at the function of the statue as a guardian at the entrance to the beach and sea reminding humans of being respectful and aware of the negative effects of human culture and behaviour in regard to the pollution, exploitation and destruction of life caused by man.

Sculptor Paul DiPasquale was born on June,15 1952 in Perth Amboy, New Jersey with the Sun in Gemini, the Moon between Pisces and Aries and Mars in Scorpio the sign of sculpting.

Same constellation: Capricorn and Sagitarius – The Tempel of Zeus in Olympia, The Forbidden City in Beijing, St. Peter’s Basilica in Rome, Facebook Headquarters