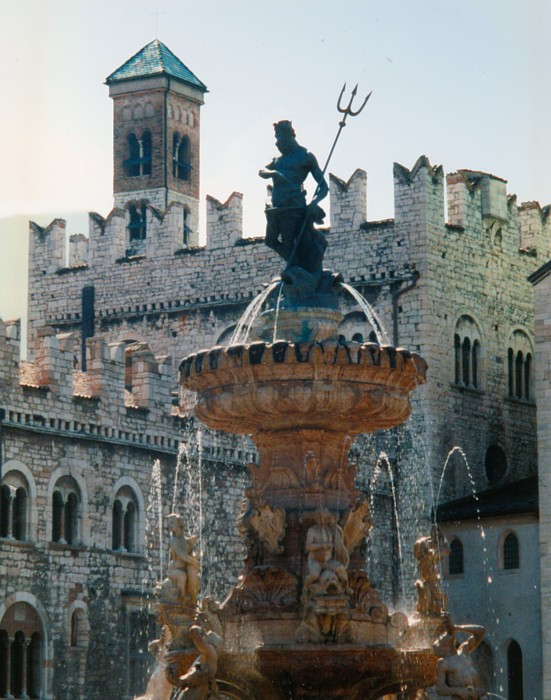 Related articles: Neptune as a Guardian in Virginia Beach, Neptune staking claims in Taurus, The “Little Mermaid” as a Guardian, The Merlion in Singapur as a guardian, Christ of the Abyss in Scorpio the sign of the underworld, The Waterloo Lion as a Guardian, The Guardian Fountains on Place de la Concorde, Golden Gate Bridge and the entrance into Capricorn on its south end, Fushima-Inari-Taisha and the gate at 0° Capricorn

The Fountain of Neptune in the north-italian town of Trento, Italy – located around 120 km north-east of Venice and at the gate to the South -Tyrolean mountains was designed and built between 1767-69 by Francesco Antonio Giongo. It depicts Neptune on top of a round basin. The original Neptune sculpture was created by Stefano Saltiero da Laglio.

Astrogeographic position for morphogenetic field level 4 (exact position) which describes the atmosphere of the sculpture itself:  located in the combination of the two highly alert, male signs of Mars: dynamic fire sign Aries sign of warfare, dominance, action, speed, strength, sports, fighting, competition, mobilization and highly defensive water sign Scorpio sign of strongholds, group hierarchy, wolves. sculpting, imaging, photography, visualization. Due to its important role in the transformation of visual imagination and perceived images Scorpio into visual images, statues, buildings and material Scorpio is to be seen as the main astrological factor in the practical manifestation of artwork and also highly symptomatic of places of the presentation of the artwork of sculpting and stone-masonry.

The position in the two signs of Mars and major astrological indicators for the motivation for fighting suggests that Neptune is depicted in the form of an ideal of dominance, strength and invincibility as the main traits for a symptomatically male role of identity and behavior. The presentation of a male personality and with a weapon in this constellation is a clear hint at the function of the statue as a guardian or protector of the town.