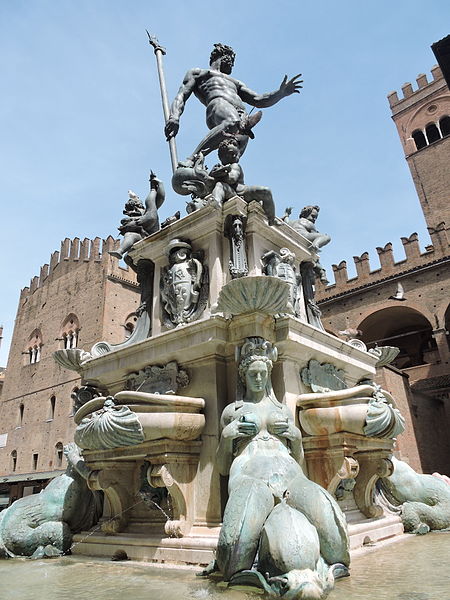 Cancer with Leo: Lactating Mermaids on a Fountain of Neptune symbolizing fertility, Astrology, places & art: the lactating mermaids of Neptune Fountain in Bologna

Compare: Neptune as a Guardian at Virginia Beach, Neptune staking claims in Taurus, The Merlion in Singapur as a guardian, Christ of the Abyss in Scorpio the sign of the underworld, The Waterloo Lion as a Guardian, The Lactating Madonna at the pilgrimage church of Großgmain

Cancer with Leo: Lactating Mermaids on a Fountain of Neptune

Fertility as the purpose of sexuality in the combination of Cancer with Leo: the lactating mermaids of Neptune Fountain in Bologna

The Fountain of Neptune in Bologna is an early work of  Giambologna erected in 1567. Neptune is standing high above while the four corners of the fountain are occupied by four mermaids. The four lactating mermaids (or nereids) depicted as riding dolphins while expressing milk from their breasts.

Astrogeographic position for morphogenetic field level 4 which describes the function, energetical topics and atmosphere of the fountain itself:  the construction site lies in the 2 signs of sexuality, fertility and emotional self-expression: Cancer and Leo. One coordinate is located in the first degrees of emotional water sign Cancer and right next to the cardinal divide of 0° Cancer or 30° Gemini. The position near the cardinal divide between Gemini and Cancer explains the  prominent role of Neptune as a guardian between the practically materialistic and the emotional planes here. Cancer represents the sign of the moon, motherhood, pregnancy, milk, breasts, the vagina, uterus, conception, childhood, emotional individuality and of feeling at home.The second coordinate lies in highly magnetic royal fire sign Leo sign of sexual desire & stimulation, self-centeredness, the sun, light, birth, the heart, expressing emotions & the self-esteem to be worth the fllfillment of one`s emotional desires.

The combination of Cancer with Leo stands for energetically particularly intense sites for several reasons. First of all because such places resonate with the two strongest astrological planets: the Sun and the Moon.  Secondly because both signs have a particularly strong resonance with emotionality and sexuality which are the strongest forces in human system.