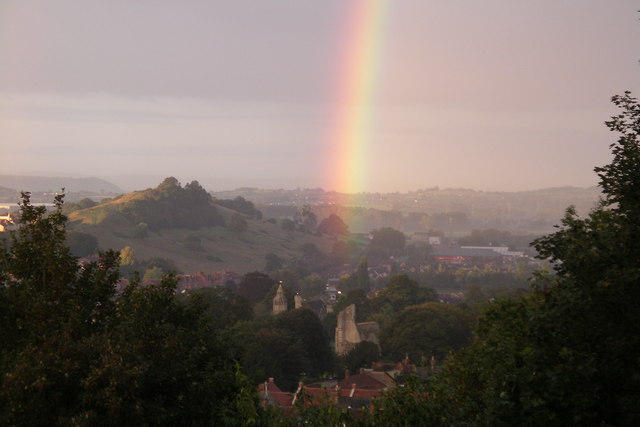 Glastonbury Abbey and Glastonbury Tor in two different worlds. Astrology & Sacred Sites: the magic of Glastonbury in astrology and astrogeography.

During the 7th millennium BCE the sea level rose and flooded the valleys and low-lying grounds that surround Glastonbury turning much of the area into marshland and lakes. Today the town of Glastonbury is located at about 22 km from the Bristol Canal inlet. Glastonbury is an important cultural center for England`s esoteric, spiritual and musical scene.

In 1192 two tombs found by the monks inside Glastonbury Abbey were attributed to King Arthur and Guinevere. In mythology Glastonbury Abbey has been named the Isle of Avalon or in some versions the gateway to a different world or otherworld that equals Avalon.

According to other traditions the foundation of Glastonbury Abbey goes back to Joseph of Arimathea a personal disciple of Jesus and seen by some as his only son. This tradition brings up the idea of a separate early christianity emerging from England.

The Abbey of Glastonbury was built in a place where both coordinates correspond to the mystic water sign Pisces. This applies to astrogeographical radius/field level 3, which shows how the place is embedded in the surrounding area. Pisces as the principle of the unconscious and the spiritual sphere represents the 12th and last step in the evolution of the astrological zodiac. It so represents the highest aspect of materia. In astrogeography morphogenetic fields corresponding to Pisces are places of reconnection with the aspect of completeness of the earth`s magnetic field. The aspect of completeness is not visible physically. It is to be understood as the aspect of materia where the underlying morphogenetic field manifests. We could call it the transcental or the sublime.  On a physical plane Pisces could be understood as the level of the smallest of particles.  This means that even if we could get to the definition of the smallest of the smallest of particles the “unsconscious” or “12th house” could per definition at least potentially include even smaller or more difficult to perceive forms of materia.  Because of these characteristics and definitions of Pisces places in in this sign are particularly suitable and stimulative for mystification, or even are the places where mystification, religion, beliefs, illusions, lies and betrayal originate.

Although the numerous projections that have been made in relation to the site Glastonbury Abbey may all be factually wrong, the place has provided space for the spiritual sensations to dwell in as legends as if wanting them to.

Chalice Well is a magic spring in mystic town of Glastonbury, England.

Astrogeographic position:  Chalice Well the “Red Spring” is located half way between Glastonbury Abbey (Pisces-Pisces) the supposed burial place of King Arthur and entrance to Avalon and Glastonbury Tor (Aries-Aries). For field level 3 its location falls in the morphogenetic field of Glastonbury Tor with both coordinates in the dynamic, male fire sign Aries. The red colour of the water of Chalice Well is due to iron oxide deposits. Iron is a symbol for Aries & its ruler Mars.

Astrogeographic position of Glastonbury Tor for morphogenetic field level 3 which describes the atmosphere and energetical topics of the whole of the hill and how it is embedded in the landsacpe:  both coordinates are located in highly alert, dynamical, male fire sign Aries the sign of warfare, soldiers, strongholds, fighting, physical strength, action, speed, new starts, sports and an indicator for the function of the site as a hill fortress.

Astrogeographic position of Glastonbury Tor for morphogenetic field level 4 which describes the atmosphere and energetical topics of the church tower and hilltop only:  one coordinate of the Tor lies in solid, fixed earht sign Taurus sign of the earth, grounding, growing roots, agriculture, food, local energetical centers, marketplaces and possession of land describing the hilltop as a site dedicated to the control over the possession of the land The second coordinate lies in service orientated female air sign Libra sign of angels, harmony, peace, balance, beauty, love, relationship and decoration.

In the polarity of Glastonbury Tor of Glastonbury Abbey  where both astrogeographical coordinates are in mystical, spiritual Pisces stands for the spiritual plane while Glastonbury Tor with both coordinates in dynamical, active fire sign Aries stands for the physical plane and physical manifestation of energies. The tower of the medieval St. Michael´s church on the summit of Glastonbury Tor is an erect male, phallic and visible manifestation in an exposed position on a hill top so that it can be seen from far away. Glastonbury Abbey has not been rebuilt and rests in itself at its place in the form of a ruin. Pisces does not focus on the physical manifestation of the building but on the reflex of mystification, so that perception would concentrate on the unmanifested aspects of the place.

Both places can be seen as gates or portals to different worlds (morphogenetic fields) because their astrogeographical constellation stands for places at the edge of their fields, just near the separation line between two fields.The site of Glastonbury Abbey (Pisces-Pisces) stands for the very end or way out of its field while Glastonbury Tor (Aries-Aries) stands for the beginning and entrance into the field that it lies in.

Another example for Aries as an indicator for St-Michael is the site of Brent Tor or St Michel de Rupe (St Michael of the Rock) near Tavistock in Dartmoor.

Brent Tor represents the remains of the 13th century church St Michel de Rupe (St Michael of the Rock). It is located on top of a hill on the site of an iron age hill fortress near Tavistock, Dartmoor has )

Astrogeographic position of Brent Tor for morphogenetic field level 3 which describes the atmosphere and energetical topics of the whole of the hill: the whole mount of Brent Tor is located in dynamic, erect, male fire sign Aries sign of the warfare, action, ignition and the indicator for St .Michael here. The 2nd coordinate is located in air sign Gemini  sign of road crossings, communication, learning, technology and practical magic describing the the function of the tower as a signpost. This constellation is valid here for morphogenetic field level 3 which describes the way the mount is embedded in the area and connected to the energetic fields of the region.  Aries is also present at the site of Glastonbury Tor.

Astrogeographic position of Brent Tor for morphogenetic field level 4 which describes the atmosphere and energetical topics of the church and hilltop only:  the church itself is in the cozy angelic combination of female, emotional water sign Cancer sign of the moon, motherhood, pregnancy, islands, feeling at home and a major indicator for the Celtic roots of English culture and service orientated female air sign Libra sign of angels, harmony, peace, balance, beauty, love, relationship and decoration.

The first Glastonbury Festival of contemporary performing arts was held from 19 September 1970 on the grounds of a farm near Pilton, 10 km east of Glastonbury town. The initial festival ground was selected for around 1500 people only – but today it covers 80 stages with 135.000 visitors by 2017.

Astrogeographic position of the festival grounds of the first Glastonbury Festival for morphogenetic field level 3 which describes the atmosphere and energetical topics of the initial festival grounds:  the coordinate for the astrogeographical  latitude lay in the last degrees of creative, innovative, holistic, spiritual air sign Aquarius the sign of the sky, heaven, paradise, self-finding, self-liberation, inspiration, flying, the stars, open air events, alternative culture and an indicator for exploring the full potentials of humans. The coordinate for the astrogeographical longitude lay in the first degrees of highly defensive, fixed. mental water sign Scorpio the sign of perception, sculpting. imaging, visual arts and underground culture. The combination of Aquarius with Scorpio represented an ideal stage for the presentation of alternative and underground aspects of culture. These two signs more than any other astrological factors represent the aspects of the outsiders of society, normality and bourgeoisie as represented by rock music in the early of its development.

The resonating degrees of the festival ground in Scorpio were transited by a Venus-Jupiter conjunction – a highly fruitful constellation indicating intense pleasures.