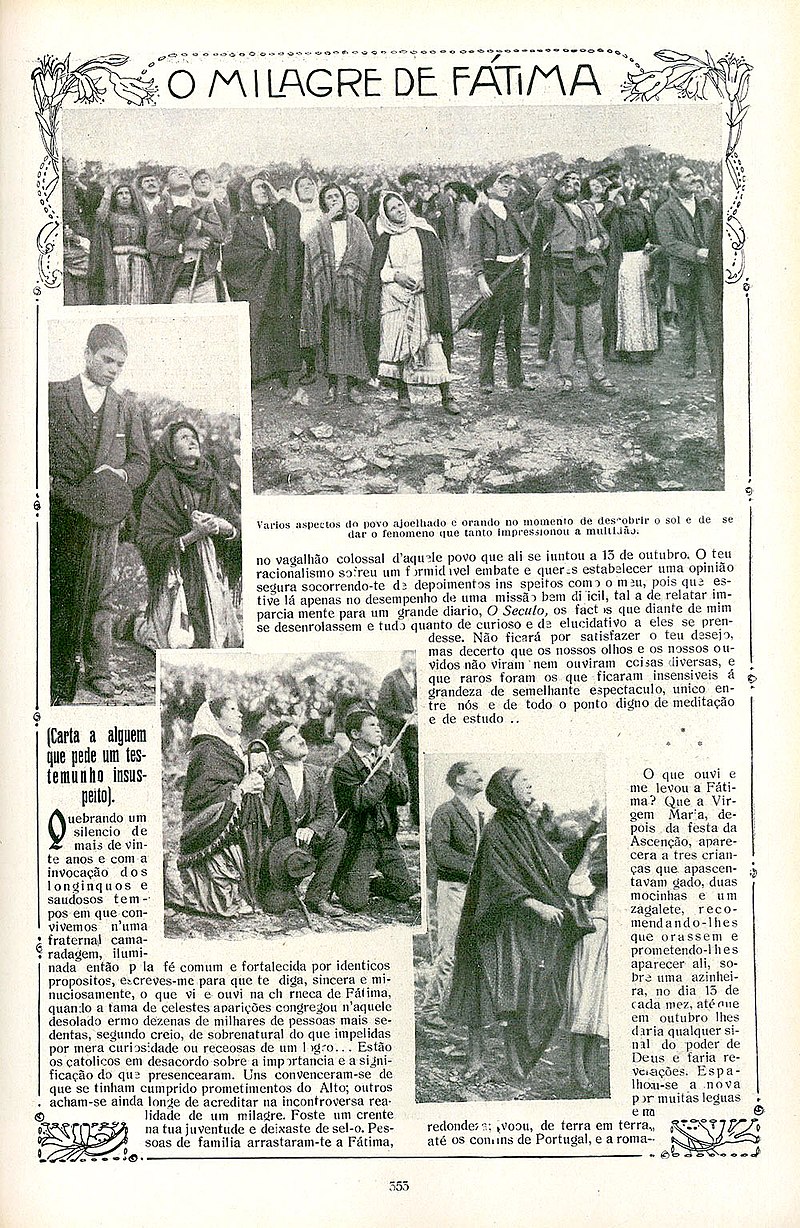 Libra and Leo – The Sanctuary of Fátima. The astrogeographical positions of the famous pilgrimage place in Portugal and site of the Sun Miracle

Related articles: Thee magical Spring of Lourdes, On the Astrology of the Black Madonna of Czestochowa, A temple of light and ignition in a field of angels: Santuario de Chimayo – the american Lourdes, Libra and Virgo – The Church of Saint Francis in Assissi,  The Temple Mount at Jerusalem in Astrology, The Birth Place of Jesus in Pisces and Sagittarius,

Libra and Leo – The Sanctuary of Fátima

The Sanctuary of Fátima is one of the most important Catholic pilgrimage sites. The legend of the town of Fatima goes back to the beautiful daughter of a Mauretanian prince, who was kidnapped by Christian conquerors and sold to the local Earl in 1158 shortly after the Portuguese reconquest of the region of Santarem. Before her marriage she is believed to have decided to convert to christian religion.

Field level 3 (the sanctuary itself)

Astrogeographic position for morphogenetic field level 3 (surrounding area) which describes the atmosphere and energetical situation of the whole area of the sanctuary: the has one in service orientated, aristocratic air sign Libra sign of harmony, balance,  justice, symmetry, beauty, love, relationship, marriage, peace and together with its number 7 the sign of angels. The second coordinate lies in highly energetic, magnetic royal fire sign Leo sign of the sun, light, the heart, power stations, self-expression and kingdom.

It is symptomatic of the female principle of Libra the sign of love relationships that the place is named by a woman’s name. The legend of a noble woman being kidnapped because of her beauty and sold and forced into marriage shows some of the most important motifs of the sign Libra sign of marriage, relationship and prostitution,. And Libra also explains why a female deity (Mary) is invoked and revered in Fatima.

Libra, the sign of the angels could be an indication that people find it easier to open up to the world of angels here than in other places. Or in other words: angels of the service-orientated Libra type could get through more easily into the material sphere here than elsewhere.

The astrogeographical correspondance with highly energetic, magnetic, royal fire sign Leo the sign of the Sun suggests that Fatima could be considered as a Sun temple or Temple of Light. The “Sun Miracle” on 13 October 1917 is highly symptomatic of that Leo aspect. The astrogeographic position in Leo stands for an intensely vitalizing energy as Leo is the sign of electric power stations. With regard to the miracles of healing, Leo`s character as the sign of light and thus of life energy could indicate in which way this place has a particularly strong impact on people and may help them to open up to the stimulus of life energy.

Astrogeographic position for morphogenetic field level 1 which explains the supraregional international and global resonance topics: the sanctuary of Fatima is located at 16° in Libra and 9°Leo.

Saturn – Neptune conjunction over the 9°Leo resonance coordinate of Fatima

During the “sun miracle” of 13 October 1917 the 9°Leo resonance position of Fatima was occupied be a conjunction of Neptun the planet of spirituality, the unconscious, invisible, subtle at 6°53 with Saturn the planet of stability, solid manifestations and critical review at 12°49 Leo with its half sum at 9°50 Leo.

The conjunction of Neptune with Saturn suggests the destabilization of the limitations and division between the sphere of the subtle, spiritual world and the solid, guarded and protected sphere of manifestations and exactly culminating over the site of Fatima miracles.

The Sun over the 16°Libra resonance coordinate of Fatima

During the “Sun Miracle” of 13 October 1917 the Sun itself at 19°Libra was only 3° away from an exact conjunction with the 16°Libra resonance coordinate of Fatima.

The Sun miracle of Fatima

The long history of miraculous phenomena at Fatima began on 13/5/1917 when Virgin Mary appeared to three shepherd children on an open field and asked them to come to the same place on every 13th of a month.

On 13/10/1917 at least 30,000 people witnessed the famous Miracle of the Sun (s.wiki). Eyewitnesses said they say the sun rotate like a wheel of fire and go speeding along the ground.

The astrogeographical positions of Fatima in Libra and Leo for morphogenetic field level 3 are reflected in the astrological chart for the apparition of the “Sun Miracle” by the Sun itself as the ruling planet of Leo in Libra near midheaven and by an outstandingly intense conjunction of Saturn and Mars as the constellation of warfare with Neptune the planet of the re-connection with the spiritual origins of existence in the sign of Leo.

Other important Catholic Pilgrimages in Europe