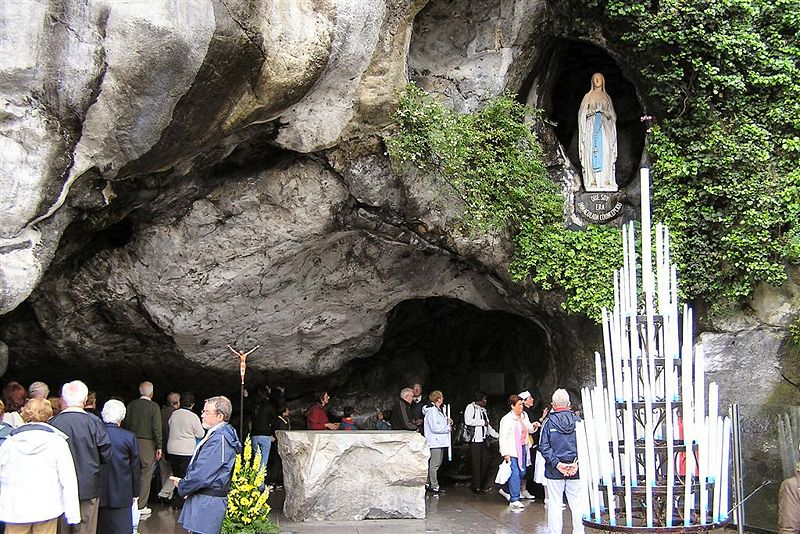 Related articles:  Libra and Leo – The Sanctuary of Fátima, The Church of Saint Francis in Assissi, The Temple Mount at Jerusalem in Astrology, The Birth Place of Jesus in Pisces and Sagittarius, Zur Astrogeographie des Vatikans, A temple of light and ignition in a field of angels: Santuario de Chimayo, The Shakti Peetha Shrines,

The magical spring of Lourdes at Massabielle Cave is one of the most important catholic pilgrimage sites in the world. On 11/Feb/1858, 11:00 then 14-year-old Bernadette Soubirous had her first in a series of apparitions of Mother Mary as a Madonna in a white dress with blue cape in the form of the “Concepció immaculata” (Immaculate Conception) here.
The spring water from a source in the cave was soon attributed healing powers and the town developed into one of the world’s most famous Catholic pilgrimage places. Wikipedia article: “Of the nearly 7,000 cases of healings that were reported in the medical office since its inception, the Roman Catholic Church has recognized 67 as miracles.

Moon-Mercury conjunction on the last degrees of Capricorn and the distant Madonna The last degrees of Capricorn the sign of mountains, rocks, deserts, winter, separation, isolation, scarcity, minimalism, bones, renunciation, asceticism, hierarchy and government refers to the highest elevation of the material earthly plane, places and topics unreachable, unattainable, unapproachable and as close to heaven as one could possibly get to heaven without giving up the material plane. The Moon-Mercury conjunction explains the projection of the planetary indicator of fertility and of motherhood accompanied by the planet of puberty onto a plane of “non existence” or reduction of existence to the mere image of a formal Madonna. Sexuality and female identity of the puberty of the 14-year old appeared transferred onto an idol of spirituality or of the imagination of it. Even more so as Mercury is the ascendant ruler of the Gemini ascendant in Bernadettes birth chart.

The Taurus- Scorpio axis
It is really fascinating that the axis of ascendant – descendant  between 28° Taurus and 28° Scorpio exactly corresponds with the astrogeographic coordinates of Massabielle cave for morphogenetic field level 4. This may point at the conclusion that at least to some extent the energetical topics of the place itself might have manifested through the apparition of a Mother Mary. The apparition of female spiritual entities at the sites of energetical springs and sources of earthly and angelic energies has a long tradition at many places all over Europe, the whole world and particularly also in India. Especially the resonance coordinate in earth sign Taurus the resonator of the earth itself is a hint at sites of important earth energy springs or springs of spiritual entities of mother earth.

Neptune conjunct the Moon`s North Node Rahu in house 11
Ecstatic experiences of  reconnection with the eternal soul with Neptune in house 11 can be experienced in states of being highly receptive and open to the spiritual world, because Neptune in that position in the charts of individuals indicates paralysis in regard to self-liberation and blocks of acting in regard to self-finding. This could explain how the space was kept clear for the presence of a spiritual entity related to Mother Mary or in the form of Mother Mary – where otherwise a more personal emotional experience and self-expression could have been associated.

Uranus aspects
The first in a series of apparitions occurred on 11 Februar at 11:00 a.m.. As the number 11 represents the eleventh of the 12 astrological structural principles the resonance of Aquarius the sign of Uranus rulership is present here not only in the astrological constellations but also numerically.  I want to mention that this particular numerical element (22, 33, 55, 88, 3:22: 2:33 a.s.o.) generally points at a manic stimulation and state. By the word mania I refer to highly intense psychic stimulation and euphoria which symptomatically arises in the course of a transitional stage in the development of individuals that have to do with freeing themselves from being dependent and non-autonomous.
Uranuses rising position just above the eastern horizon and in close square aspect to the position of the Sun makes Uranus the strongest factor in the chart. This is even further emphasized by the position of the Sun conjunct Venus the ruler of the ascending sign  Taurus in Uranus`s own sign Aquarius. The spiritual awakening of Bernadette Soubirous can so be compared to the rising of the Kundalini in the nervous system projected onto the perception of the energetical situation of the Massabielle Cave.

The Sun as the ruling planet of Leo
The Sun as the ruling planet of fire sign Leo was in Leo`s opposition sign  Aquarius and in nearly exact square to Uranus. A central topic of that day therefore was the tension between subjective, self-centered perspectives (Leo) and self-finding and reconnection with the complete and abstract dimension of the origin of the eternal soul and it`s relevance in relation to the true dimensions of the form of existence as a human being (Aquarius).  States of fear, shock and paranoia, accidents as well as states of ecstasy and the rising of the Kundalini are typical experiences for such Uranus positions. In individual natal chart astrology the Sun – Uranus aspect marks some kind of initiation process and experience of stress related to self-finding, individualization and separation from the social background and personal involvement with her birth family.

The position of Jupiter and Neptune both in creative, innovative air sign Aquarius the sign of the sky, heaven, paradise, flying, emancipation, the nervous system and self-liberation in house 10 of Bernadette Soubirous birth chart an along with the intensity of the Moon on 10°Leo a zodiac degree known for its physical intensity in energetical healing and physiotherapy give us some idea of the intensity of Bernadette´s relatedness to karmic experiences in spiritual healing work. It can therefore be assumed that the resonance of her spiritual presence and/ or the memory of that is part of the spiritual healing worked by the special energies of magic spring of Lurdes at Massabielle Cave.

On the day of the first apparition of Mother Mary the Moon at 24° and Mercury at 27° Capricorn occupied the position of Saturn in Bernadette`s birth chart. Both degrees stand for the habitual karmic home and the experience of education as a monk and in celibacy and austerity in past incarnations.  This is why the extremely intense experience of her own energies and potentials for development especially in regard to sexuality (Moon in Leo at the end of house 3 the house of puberty and in transition to house 4 the house of sexual maturity) during her puberty represented a confrontation with the recollection of habitual karmic memories from spiritual experience in monk cultures.

Consequently because of her intense experiences of ecstasy Bernadette was left no other choice as to disappear in a monastery at the age of 22, where she died from bone tuberculosis (german: “Schwindsucht” = “addiction to disappearing”) – an inflammation of her own Saturn (Saturn = bones) 13 years later. Reportedly after becoming a nun Bernadette never visited Massabielle Cave again most probably because the catholic church was so afraid of the intensity and dimensions of her spiritual ecstasies at the place. Instead Bernadette was made an emblem of the catholic church when Pope Pius XI.  introduced her to the catholic hall of saints on 8 December 1933 a date of the feast of immaculate conception. Bernadette was so transformed into Madonna and even a staue of one herself.

radius/field level 4 – exact location: The astrogeographical position for radius level 4 describes the atmosphere of Massabielle cave itself which lies in the last degrees respectively of highly alert, defensive, mental water sign Scorpio and the highly profitable, attractive, material earth sign Taurus the sign of the earth, grounding, growing roots, market places, local energetic centers and agriculture. This constellation of two opposition signs  – a natural aspect of tension – may be a hint at how intense the energetic situation at Massabielle feels like. Taurus can be considered to stand for a marketplace here just like in any other place. explaining the great success and wealth that the cave has brought to the town of Lourdes. The aspect in Scorpio could stand for the tendency to close up and defend places and can be related to the character of the site of the holy spring as being in a cave. In regard to the apparition Scorpio as the sign of visualization is a possible indicator for the intensity of the visions.

radius/field level 3 – surrounding area: The site of Massabielle Cave and the so called “Holy Area” including the basilica “Our Lady of Lourdes” are situated in the zodiac sign constellation of water sign Cancer with the fire sign Sagittarius. This applies to morphogenetic radius level 3 which explains how the place is embedded in the surrounding area and the town of Lourdes. The female water sign of Cancer as the astrological equivalent of freshwater sources is of particular importance with regard to the healing power of the water here. Within the systemic hierarchy of the twelve astrological structure elements Cancer represents the ability of individuals to feel and perceive their own inner life and thus to develop an independent sensual and emotional personality. On the physical level, it represents fertility and is the simile for the uterus. In regard of one coordinate being in Cancer the situation in the Massabielle Cave could be compared to the situation in the uterus and be symbolically understood as a reconnection with the inner spring or origin of emotions.
The fire sign Sagittarius stands for the mental sphere. It rather indicates a situation aiming at the detachment from physical, sexual bondage and sensation and aims at the expansion of mental control over experience. It so stands for a critical contrast to the principle of motherhood (Cancer). Under this regard the apparitions of Lourdes can not be understood as purely of a mother goddess or essence of the mother principle. The Madonna form does not appear with the child Jesus in her arms here, but in the form of a supposedly “immaculate” conception, as the image of a woman trying to escape physical femininity and motherhood. Furthermore it should be noted that Sagittarius represents the sign of the priest castes, shamanism and initiation rites. Therefore it can not be excluded that a power place like Massabielle Cave lying in such an area had long been a site of initiation rites in earlier druid and shamanic cultures. And Sagittarius may have made it easier for the catholic church to conquer, possess and rule the site.

radius/field level 2 – which describes how Lourdes is embedded in the region of region of Midi-Pyrenees :  Together with Rome, Fatima and Santiago de Compostela, Lourdes is one of the most important places of pilgrimage for european catholics. The constellation here brings together the spiritual water sign Pisces the sign of the unconscious, the spiritual plane, dream world, fairy tales, mystification and temples which stands for the reconnection with the spiritual origin of existence with service orientated mental air sign Libra the sign of harmony, balance, beauty and most important indicator for angels. This constellation of ideal love and romance does not necessarily hint at the goddess of an immaculate conception in the first place. But as referring to places beyond the material sphere the combination of these two signs surely is fit to include any metaphysical aspect. The Typical image of “Our lady of Lourdes” is a white and light blue ideal angelic image of Mary as an angel or a goddess of the sky and heaven. Pisces as referring to the cosmos beyond the stratosphere would stand for the blue background and Libra as the sign of the horizon appears in its aspect as the first sign of the sky here. here comes a list of towns of catholic pilgrimage for comparison and evaluation. As can be seen Libra is a major aspect for the pilgrimage towns.