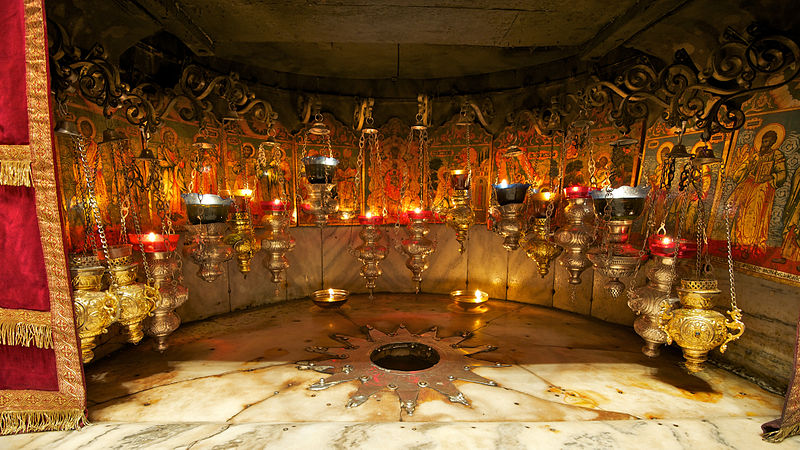 Related articles: The Church of the Holy Sepulchre of Jesus Christ, Jesus Statues in astrology, Krishna`s Birth Place in Pisces with Capricorn, Libra and Leo – The Sanctuary of Fátima, The Church of Saint Francis in Assissi, The Temple Mount in Jerusalem, The astrogeographical position of Jerusalem,

The Birth Place of Jesus in Pisces and Sagittarius

The Church of the Nativity was built by emperor Constantine in the fourth century AD (completion 339 AD) at the site of a cave that was considered to have been the Birth Place of Jesus in Bethlehem, Palestine.

Astrogeographic position of the church of nativity for morphogenetic field level 4 which describes the atmosphere and energetical topics of the church itself: on of the two coordinates of the site is located in highly imaginative, mystical, spiritual water sign Pisces the sign imagination, dreaming, illusions, mystification, fairy-tales, music, of the re-connection with the spiritual plane and the most important astrogeographical indicator for temples.  The position of the site in Pisces is also highly symbolic of the supposed historical role of the Christ as the prophet of the Astrological Age of Pisces that began with the ingress of the point of the spring equinox into the sign of Pisces during the first century AD. Because of it`s relation to an imaginative world Pisces could simply be understood as an indication that the site was chosen for worship of Jesus` birth because it allows and even invites projections, mystification and legends. The position in Pisces is highly symptomatic of supposedly magical places. Highly typical places for these aspects of Pisces are the supposed burial site of King Arthur at Glastonbury Abbey  and the legendary site  of Buddha`s illumination at Bodh Gaya and Mount Olympus the seat of the greek gods and the site of the Lincoln Memorial in Washington all of which have both coordinates in Pisces.

Other supposed birth places with one coordinate in Pisces are  Krishna`s Birth Place in Pisces with Capricorn and the Birth Place of Chaitanya Mahaprabhu in Pisces with Cancer. Among the important sites of spiritual inheritance in Israel it is the whole area around the Temple Mount in Jerusalem  – the site of Salomo`s First Temple which is located in Pisces.

The astrogeographical position of the site is an interesting astrological analogy for Jesus and could easily relate to some of the most important features of Jesus` life and teachings. It may be doubted or critically discussed wether or not the timidity and reflex of trying to hide which are so typical of the sign of Pisces do actually represent the ideal of “Turning the other cheek” as such strategical behaviour would require also a lot of stubbornness and courage. But Pisces may surely be related to the idea of non-revenge, letting go or seeking the solutions on a spiritual rather than on a practical level.

The 2nd coordinate of the Church of Nativity: the entrance of the church is located on the last degree of the highly defensive water sign Scorpio the sign of fortresses and major indicator for caves. This aspect is reflected by the narrow entrance.

The larger part of the church itself is located on the first degrees of mental fire sign Sagittarius the sign of the priest castes, preaching, prophets, shamanism. fire sacrifice, initiation, ritualistic worship and a major astrological indicator for the fiery aspect of the spirituality of the Holy Ghost.

Sagittarius would be related to the faculty of healing and particularly to Jesus` role as a preacher too. The intensity of the  ornamental design is an element of Sagittarius as well as of Pisces. The Star of Bethlehem and the semi-circle of the light and fire sacrifice inside the Birth Grotto represent elements of design related to Sagittarius.

As an aspect of conformity with the priest castes, Sagittarius as the sign of the Popes and Cardinals does not reflect Jesus` radical appeal for challenging and criticizing the priest castes. The Vatican City – the center of the catholic church in Rome for example is located in Sagittarius. This correspondence could suggest that Emperor Constanine`s move to select this site for the Church of Nativity was dedicated at stabilizing the roman catholic church. Therefore Sagittarius is no clear indication for the authenticity of the supposed birth place either, as it could mean that the site was deliberately chosen for a convenient place of worship.