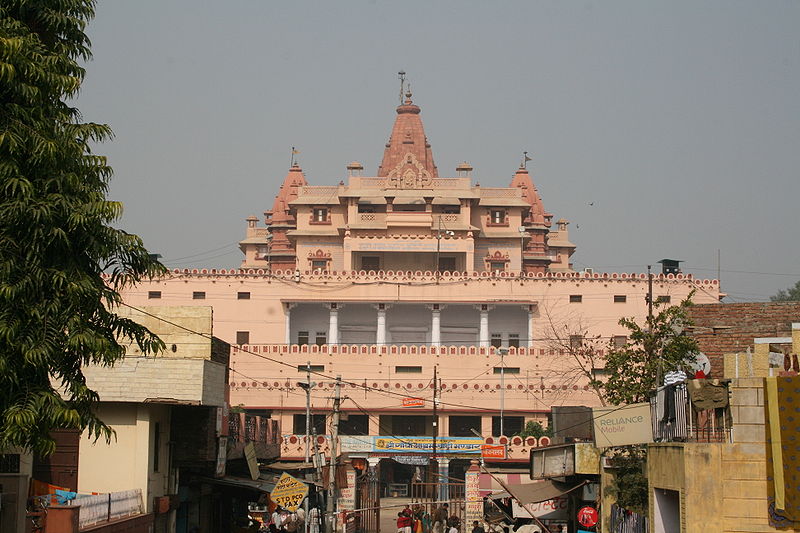 Related articles: Krishna`s wives Rukmini and Radha in astrogeography, The Hindu Gods Vishnu and Narayana in astrogeography, The Swaminarayana cult – an Astrogeographical Study of a modern Hindu Sect, Wisnu Kencana sculpture park in Bali. Indonesia, Astrology, Spirituality & Sacred Sites: Shirdi Sai Baba,  The Birth Place of Chaitanya Mahaprabhu in Pisces with Cancer, The Temple of the Eulysian mysteries,  Jesus` birth place in Pisces with Sagittarius, The Temple of Buddha`s Illumination

Sri Krishna is worshipped as the eighth avatar of the god Vishnu and also as the supreme God in his own right. He is the god of compassion, tenderness, and love in Hinduism. Krishna’s birthday is celebrated every year by Hindus on Janmashtami according to the lunisolar Hindu calendar, which falls in late August or early September. According to mythology Krishna was born to Devaki and her husband, King Vasudeva of the Yadava clan

The birth myth of Krishna: When Mother Earth was burdened by henious activities of Kamsa and other demon Kings she went to Lord Brahma in form of cow who along with other gods took her to the shore of the milky ocean. There they chanted Purusha Sukta to summon Lord Vishnu. Lord

Vishnu assured her and other gods that he would himself take birth along with his part Shesha in the to end the tyranny. The tyrant Kamsa was told by fortune tellers that a child of Devaki would kill him. Kamsa therefore kept Krishna`s mother Devaki and his father Vasuedeva in prison in order to kill all of their children.

The site of the birth temple of  Krishna in the city of Mathura has been of religious significance since the 6th century.

Astrogeographical resonance coordinates for the Birth temple of Krishna for morphogenetic field level 3 which describes the atmosphere and energetical topics of the surrounding area: the site is located in solid, conservative, strict, exclusive earth sign Capricorn the sign of control, impediments, government institutions, walls and a natural indicator for separation. The 2nd coordinate is in mystic spiritual water sign Pisces the sign of the divine, the spiritual plane and of mystification. This astrological sign constellation stands for a situation where the value and the rights of individuals are under challenge. Therefore it does not represent the typical qualities of Sri Krishna in the first place. It is rather symptomatic of the circumstances of Krishna`s birth in a prison dungeon, where his parents had been in detention for many years.

The combination of Saturn with Neptune or Capricorn with Pisces is known for its resonance with situations of depressions and of being deproved of ones rights. It threrfore directly relates to the depression and unjustice of the circukstances of Krishna`s birth in a dungeon.

Indian astrologer BV Raman Rao claims Krishna`s birth date to be 19/Jul/3228 B.C. at 0:00. The date as well as the birth data calculated by him for that day are uncertain. But this data reveals which astrological aspects have been traditionally believed to describe Krishna: the Sun conjunct Jupiter in Leo the sign of the Sun and light, Ascendant conjunct the Moon in Taurus the sign of cows and Mars and Venus in Cancer.

Actors who play the role of characters can have a more or less convincing and/or intense resonance with the character they depict. In the case of B.R. Chopras classical Mahbharata series the selected actor seemed to deliver a highly effective image of the imagined personality, character and archetype that the Krishna Avatar represents in the eyes of 20th century Indian society.

The actor who plays the Krishna part in B.R. Chopra Mahbharata series is Nitish Bharadwaj born June, 2 1962 at 1:02 in Chopati, Mumbai.

Nitish Bharadwaj was born with the conjunction of the two healers Jupiter (success) and Chiron (medical treatment) rising conjunct the ascendant in Pisces the sign of spirituality itself. This conjunction delivers a fascinating image for an imagined representative of the supreme personality of god.

Venus in Cancer on the cusp of house 5 explains the appeal to a female expression of sexuality, magnetism, beauty, relationship orientation which relates to the beauty and attractiveness of the Krishna archetype and the

The exact square of the Sun position in Gemini the sign of practical magic, intelligence, technological solutions, teaching, cleverness, lies and stealing to the Jupiter-Chiron conjunction can be examined as relating to the contradiction between Krishna´s appeal to the holistic truth and laws of karma and his insisting on the need for the use of magical tricks and of warfare for the protection of dharma.

The strong minority (Saturn-Neptune aspects) status of Saturn in Aquarius the sign of outcasts in house 12 and conjunct the karmic issues trap of the South Node both square to Neptune is another strong aspect related to Krishna as it reflects the astrogeographical resonance coordinates of Krishna`s birth place in the depression of a dungeon and deprived of his birth rights..