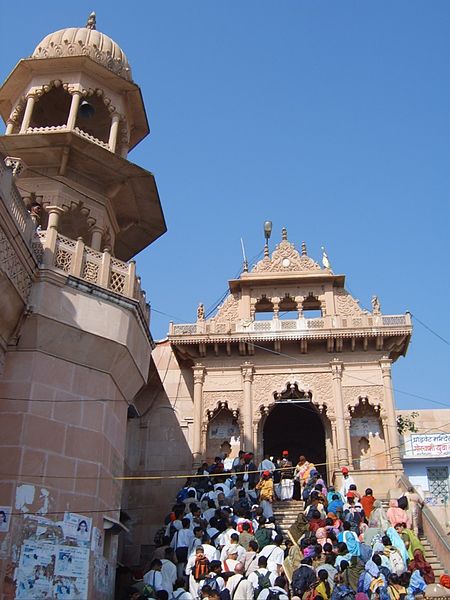 Krishna`s wives Rukmini and Radha in astrogeography. Astrology, mythology and sacred sites: aquarius as the sign of India`s only Radha Rani Temple in Barsana near Mathura, India.

Aquarius the sign of India`s only Radha Rani Temple

Astrogeographical position of the Radha Rani Temple for morphogenetic field level 4 (exact position) which describes the enrgetcial topics and atmosphere of tthe temple itself: both coordinates of the temple are located in the creative, innovative, individualistic spiritual air sign Aquarius the sign of the sky, heaven paradise, outsiders, saddhus, emancipation, self-liberation and self-finding. Aquarius is the sign of the outcasts, casteless and lowcast and relates to the fuller amount of potentials from non-sexuality to free sexuality. As the sign of castration (Uranus) it relates to the eunuchs and the genderless as well as to the traditional indian transgender culture (Hijra). The Hijra are a traditional part of the celebration of the important Holi fetsival at Barsana.

Astrogeographical position of the town of Barshana for morphogenetic field level 2 (city) which describes the energetical topics of the whole town area along with is neighbour villages: the town of Barshana is located in the “extraterrestrian” combination of mystic, spiritual water sign Pisces the sign spirituality, dreaming, music, letting go, empty space itself and of the function of temples as places dedicated to the reconnection with the spiritual plane with holistic spiritual air sign Aquarius the sign of the sky, heaven, paradise, idealism, abstraction, reconnection with the fuller ressources of humans, self-finding, flyingand of outer space..

Radha Rani and the Holi festival

Radha is said to be the head of the milkmaids (gopis). In Vaishnava religion she is worshipped as the shakti or power potency of the supreme personality of Godhead Para Brahman who according to Vaishnavite religion is identified as Shri Krishna. She is the personification of pure devotional service unto Krishna (bhakti devi). Her festival is celebrated on Radhastami day in the month of Bhadra (23 August – 22 September) relating it to the sun in Virgo.

Radha`s birth place Barsana is the place of the famous “Lath mar Holi”  (video) the annual nationwide start of the Holi festival. Holi the festival of colours is an ancient and highly popular religious spring festival on the full moon day of the month of Phalguni (February/March) celebrating Vishnu`s victory over a demon king.

Aquarius and Pisces as the indicators for the Holi festival

The Holi festival is supposed to have its origins in a ritualistic festival that celebrated the victory of the good over the demonic forces and forces of evil. Important myths relate it`s origin to King Prahlada and to Krishna There are a number of other traditions with different roots related to Holi. For example:

“The legend of Radha and Krishna is closely linked with this tradition of colors on Holi. Young Krishna, who had a dark complexion was jealous of his beloved Radha’s extremely fair skin. In a mischievous mood, he applied color on Radha’s face. Following this ancient legend, lovers till date long to color their beloved as an expression of love.” (from holfestival.org)

The date of  the Holi festival is set on the day of the full Moon of each year during the month of Phalguna  is regarded either as the 11th or the 12th month of the Hindu calendar which would relate it either to Aquarius or Pisces. As the town of Barsana the starting place of Holi is located in the combination of these two signs I want to recommend to consider their combination as a possible precise indicator for the festival as such, although a consideration of the most important aspects of Holi may lead to the conclusion that the festival has more traits of Aquarius than it has of Pisces.

2. Secondly Holi is a festival where people from all castes are allowed to participate and the caste system is at least to some extent ignored for a day. The mixing of the different colours and the allowance to dance, sing and play on the streets allows people to free themselves from the routines and habits of everyday life. These too are important features of Aquarius rather than of Pisces.

Today the Holi festival is celebrated in many countries worldwide.

Astrogeographical position of the Radha Krishna Temple at Spanish Fork, Utah, USA for morphogenetic field level 4 (exact position) which describes the energetcial topics and atmosphere of the temple itself: the temple site has both resonance coordinates in emotional water sign Cancer the sign of the moon, motherhood, pregnancy, fertility, childhood, rivers, lakes, springs, feeling at home, emotional authenticity and modernity. Cancer plays an important role for sites of temples as places of important energetical centers of emotionality in India. My astrogeographical measurements have shown a strong resonance with Hndu god Shiva. Compare my articles on the Sites of the 12 Jyotirlinga, Ganges and Shakti Peethas.

In Hindu mythology Vishnu has the role of the god of light. Krishna represents the 8th incarnation of Vishnu as an avatar in an earthly body. For a comparison of important Vishnu temples in astrogeography compare my article: The Hindu Gods Vishnu and Narayana in astrogeography.

The female aspect and wife of Vishnu is Lakshmi the goddess of wealth. All of Krishna`s wives can be considered as representing particular aspects of the goddess Lakshmi. But they can also be seen as forms of other godesses.

Particularly Krishna`s first and principal wife and queen Rukmini is seen as the incarnation of the goddess Lakshmi the female aspect of Vishnu. She is mainly related to Krishna`s role as the prince and king of Dwarka in the State of Gujarat.

Some traditions see Krishna`s second most important wife in Satyabhama. who is believed to be an avatar of Bhumī Devī, the Goddess of Earth. She aided Krishna defeat the demon Narakasura.

The Rukmini Devi Temple near Dwarka, India is the most famous and possible oldest Rukmini Temple in india. It is said to be 2,500 years old but in its present form it is inferred to belong to the 12th century.

Astrogeographical position of the Rukmini Temple at Dwarka for morphogenetic field level 4 (exact position) which describes the energetcial topics and atmosphere of the temple itself: one coordinate is in highly energetical, magnetic, centralistic fire sign Leo sign of the sun, light, heart, power stations, kings and queens, sexuality, magnificence and the right for emotional self-expression, The 2nd coordinate is in highly imaginative, mystic sopiritual water sign Pisces the sign of the spiritual plane, the invisible, unconscious, sublime, mythology, legends and most typical and important astrogeographical resonator for temple sites.