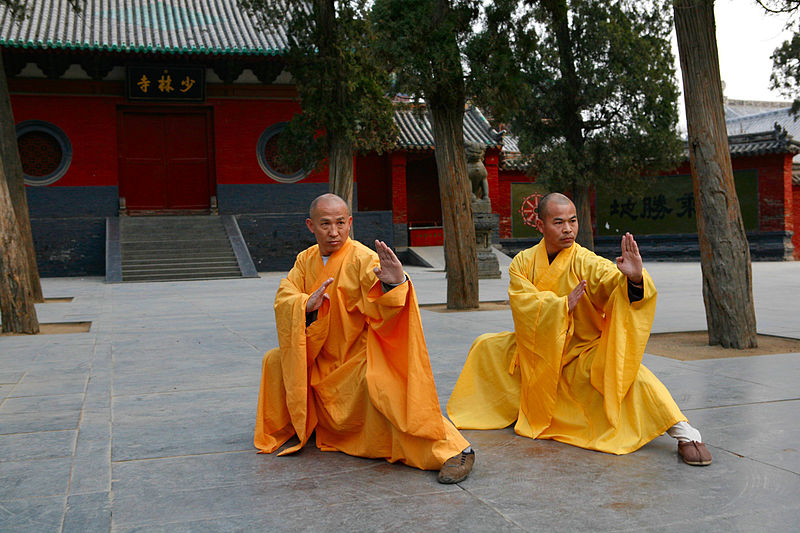 Related articles: Astrogeographic position of Beijing, Sagittarius and Capricorn – The Forbidden City in Beijing,  Astrology and Sacred Sites: The Sacred Mountains in China, White Horse Temple – the first Buddhist Temple in China, The Longmen Grottoes at Luoyang, The Lucky Coin Structure in Sagittarius, The Tian Tan Temple of Heaven in astrogeography, Libra as the sign of symmetry, “Tower of Ring” and the punctuation of the landscape with a ringtower in Tianjin.

The Legendary Shaolin Monastery in astrogeography

Despite the high reputation and fame of the Shaolin Monastery as the origin of the Buddhist history of martial arts in Hollywood the actual birthplace of the much older traditional Chinese Martial Arts is to be sought somewhere else. The most plausible origin of Chinese Martial Arts goes back to the beginning of military training of course. As far as the Taoist version is concerned the origin is often associated with the monasteries on the north side of Wudang Shan which are located in Aries the sign of warfare:

Wudang Shan played an important role as the supposed orgin of Tao Yoga or Tao Yin,T’ai Chi Ch’uan and Chinese Martial Arts. The north half of the mountain  because located in dynamic male fire sign Aries the sign of warfare is to be seen as the main place of astrogeographical resonance  for the topic of the martial arts here. The famous taoist temples and monasteries associated with the chinese god Xuan Wu are located in that area. Xuan Wu is also called the “Dark & Mysterious Warrior” and particularly revered in the practice of martial arts. The word “martial” derives from the name of Mars the roman god of warfare and as a planet the astrological ruler of fire sign Aries.

Another astrological sign which should be considered as a valid indicator particularly for the more spiritual aspects of chinese martial arts is air sign Libra the sign of balance, harmony, reacting, dancing and the most important indicator for chinese culture, Libra would explain anticipation, reacting on attacks, balancing, peaceful thinking and other important aspects of chinese martial arts. Going through the whole list of Chinese Martial Arts it may be possible to categorize the different styles and philosophies using all 12 signs.

As can be seen on the map above Mount Song is in the central position among the nine holiest mountains. But let`s examine in how far the astrogeographical position could testify and explain the Mount Song as the energetical mountain center of the land.

In the list below it can be seen that Mount Song which is related to the center of the energetic system of the five mountains in fact has one coordinate in Taurus the sign of the earth (Field level 3), grounding and centering at earthly places. Taurus is an astrogeographic indicator that could to some extent verify the role of Song Shan as the central mountain.  But then the same is case  for Mount Tai and Mount Shan in Shanxi.

More important for the supraregional importance could be the position of the mountain range of Song Shan in highly centralist, magnetic royal fire sign Leo for field level 2. Anyway Leo the sign of the Sun as the center of our solar system is the strongest indicator for energetic centers in the landscape.

The combination of centralist Leo with mutable sign Gemini the sign of road crossings and connections does not emphasize Mount Song`s role as an energetical center of the land. Gemini rather points at a center of the infrastructure or traffic junction or in terms of the flow of electromagnetic energies along the surface fields at an interface and link for the flow and exchange of energies in the morphogenetic fields.

Field level 2 describes the position of the full mountain in the morphogenetic field of the province where the mountains lie whereas field level 3 defines the astrogeographic quality and atmosphere of the peak areas and their surroundings. I was really surprised and fascinated when I found out that all the 5 peak areas of the sacred mountains have at least one astrogeographical coordinate located in spiritual water sign Pisces the sign of meditation, mystification and temples. Pisces is the sign of the spiritual plane and by far the most important indicator for the function of temples to reconnect us with the spiritual origin of existence. This means that the central peak areas of these mountains in Pisces actually represent places that are highly supportive for spiritual experience, meditation and reconnection with god.

As Pisces is a double-sign there is also another aspect to be mentioned of Pisces here. The presence of an astrogeographical coordinate in Pisces at places is no guarantee that a temple at this place is what it seems or pretends to be. Pisces usually paths the way for mystification and hidden manipulation at the same time as it leaves the doors of perception open to the invisible. Therefore the position of “Holy Places” in Pisces is as typical as it can be ambiguous.

Though we are dealing with a  geomantical observation probably much older than the history of Buddhism in China the fact that these four mountains have been selected as the holiest ones by the forefathers of the Feng – Shui  researchers is actually congruent and in harmonious resonance with the astrogeographic coordinates of the place of the illumination of Gautama Buddha.  The Mahabodhi Tree at Bodh Gaya has both coordinates in Pisces which gives us a clear hint that Pisces is a really supportive and stimulative aspect for deep meditation. As can be seen from the list above the same accounts for Mount Heng  in Hunan, whose peak area (for field level 3) is a truly mystical place in the sense of a Piscean mountain. This makes it a potentially highly auspicious and stimulative place for meditation.