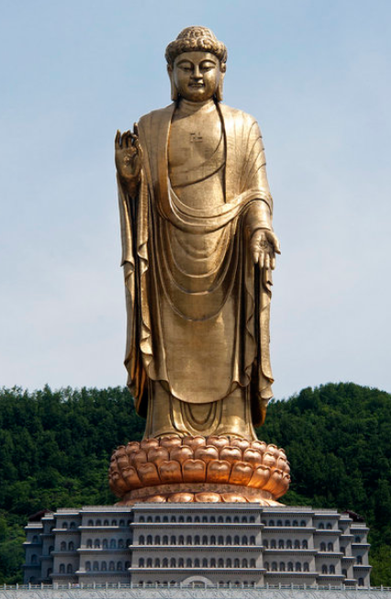 Related topics: The tallest statue worldwide: the “Statue of Indian Unity”,
Scorpio as the sign of sculpting, Pisces and Pisces – The Mahabodhi Tree in Bodh Gaya, Hiroshima, Buddhas of Bamiyan

The “Spring Temple Buddha” is a statue situated at Zhaocun a small town in Lushan County in the chinese province of Henan. It is and has been the tallest statue in the world since its completion in 2008. The decision to built the 153 m tall “Spring Temple Buddha” (inaugurated in 2008) in the Chinese province of Henan is said to have been taken under the impression of the destruction of the Bamiyan Buddhas. Though that may not actually be true the sculpture still works as an emblematic demonstration of the vividness of Buddhism. The 25 m pedestal which the statue of 128 m is placed on, serves as a buddhist monastery. The name “Spring Temple” refers to the nearby Tianrui hot spring.

The positioning of temples in places of Capricorn resonance relates them to the appeal to preserve, rule, enforce, abstain and excorcize. The sign of Capricorn represents the material aspect of spirituality. This may not necessarily relate Capricorn to spirituality itself directly nor to the concentration on the divine nor the openness to the communion with entities of the spiritual plane. But because Capricorn does symbolize the resonance with the hardware of spirituality – the bones, relics, achievements, traditions, stability of religious cult, state religion and functioning tribal institutions it seems to work as the representative of spirituality in the earthly planes.

In regard to the name of the “spring temple” it should be noted that Capricorn represents the combination of the elements of earth and fire and so does not directly refer to the site of a spring nor to places of water. In fact Capricorn relates to dry and even desert-like biotopes.

As to the circumstances of the statue`s construction its astrogeographical position may well serve as an indicator for the constructor`s intention to stand firm against the extinction of Buddhist inheritance worldwide.

The combination of Capricorn with Capricorn does not relate to the typical astrological aspects in Gautama Buddhas birth chart as it is traditionally delivered in India: the Sun on the last degrees of Aries, the Ascendant between 15° and 20° of Cancer and the Moon in Libra (compare: BV Raman Rao “Notable Horoscopes”).

If Capricorn was considered to describe the character of the celestial Adibuddha Vairocana it could be his aspect as the embodiment of Emptiness (Śūnyatā) which refers to the absence of inherent existence in all phenomena that could best be related to the reflex of the reduction of mysticism in the mechanisms of Capricorn. If Capricorn is interpreted as an indication for the possible aspect of Vairocana as the primordial and highest of all Buddhas Capricorn would indicate that Vairocana represents an administrator of the cosmos rather than a central creator personality.

Capricorn vs. Cancer: The polarity between the 2 tallest statues in the world

In 2018 and 10 years after the inauguration of the Spring Temple Buddha another supertall colossal statue was inaugurated. The “Statue of Indian Unity” which together with the pedestal on which it stands is 240 m tall.
I find it absolutely fascinating that the astrogeographical coordinates of the Indian statue in the first degrees of Cancer and near the topics of the summer solstice seem to resonate directly with the position of the Chinese statue with both coordinate near the winter solstice.