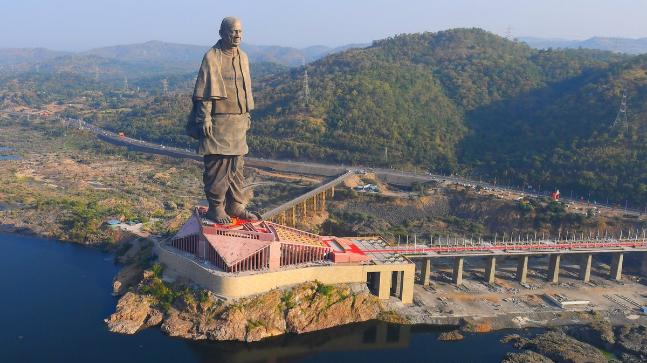 Related articles: The astrogeographic position of New Delhi, The Shakti Peetha Shrines in astrogeography, The source of the river Ganges in Cancer-Scorpio, Gemini and Aries – A Statue of Hanuman, Sri Amarnath Shiva Lingam in Aries with Cancer, Shiva in two water signs, The Sites of the 12 Jyotirlinga in Astrology, Cancer with Scorpio: the birth place of Mahavatar Babaji,

A new record holder for the title of the tallest statue worldwide was revealed in India on October 31 2018: the “Statue of Unity”. And this time it does not depict a god or saint but a indian politician. In the current list of tallest colossal statues worldwide the statues ranked 2 to 8 all depict buddhas. And no it is also not Mahatma Gandhi who personally would never have consented to building such a giant statue in his name for his ideals of austerity, compassion and respect to mother nature.

The “Statue of Indian Unity” portraits a national hero whose reputation in foreign countries is by far less than Gandhi himself: it depicts Vallabhbhai Patel – India`s first foreign minister whose contribution to the unity of India is honored by giant statue: After the withdrawal of the british colonial troops and political government from India he worked to convince 550 small kingdoms to join India during the country´s foundation phase in 1947/48. This was an improbable achievement also because India was not and had never been a homogenuous nation ever before. Let alone one with a central government. It has to be understood that the British colony in India had covered only 2/3 of Indian territory – the rest were small states. To get a glimpse of the complexity of India´s population it helps to understand that the indian subcontinent alone has no less than 780 recognized languages.

Astrogeographical position for morphogenetic field level 4 (exact position) which describes the atmosphere and energetical topics of the statue itself.: both resonance coordinates are located on the first degrees of emotional water sign Cancer the sign of the moon, motherhood, feeling at home, ancestors, fertility, pregnancy, childhood, eomotional individuality & authenticity, melancholy, beaches, rivers. Of course Cancer can easily be identified as the resonating sign for the birth of a nation and also the most positive aspect of patriotism or should we rather say matriotism because of Cancer´s impact as the sign of motherhood: feeling at home with all the melancholy and positive identification one may feel with the motherland.

From an astrogeographical point of view the sign of Cancer plays a highly important role in hinduism through its resonance with places related to Shiva, the Shakti Peethas and the source of India´s holy river the Ganges. Compare my blog article: “Stations of Ganges River in astrogeography” Cancer also resonates with the position of the statue on a river bank as the natural habitat of crabs.

The fact that both astrogeographical coordinates are directly near to the cardinal divide of the summer solstice resonates with the topics of the climax of fertility and the moment of conception of the new era and the new Indian nation. India had never before been united under one central government..India alone has 780 langauges.

The midday chart whwhich displays the abstract topics of the climax of achievements of the day shows Uranus the planet of self-finding on the first degree of Taurus the sign of possession of territory in a grand cross through opposition with venus and square the axis of the Lunar nodes Rahu and Ketu. The North Node Rahu – the astrological factor that explains the aims of the day was on the first degree of Leo a degree of leo the degree of the birth of light and conjucnted by the Moon the planet of the people, nation, ancestor line and family or as I personally prefer to put it: the planet of the “emotional, morphic and semantical field of the homeland combines” or to speak with the title of the statue: the Union Field.

The Natal chart of India

In the birth chart of modern India the astrogeographical resonance degrees of the “Statue of Unity” in early Cancer were occupied by Mars the planet of ignition, action, descisions and new starts on 1° Cancer and in house 2 the house of territorial possessions and in thus to the territotial integrity of the nation.

Cancer vs. Capricorn – Summer Solstice vs. Winter Solstice – India vs. China: the resonance with the 2nd tallest statue: the Spring Temple Buddha

The statue of Indian Unity tool over the lead in the competition for building the tallest statue on the planet from the Spring Temple Buddha in Lushan County in the chinese province of Henan.

I find it absolutely fascinating that the astrogeographical coordinates of the Indian statue in the first degrees of Cancer and near the topics of the summer solstice seem to resonate directly with the position of the Chinese statue with both coordinate near the winter solstice.