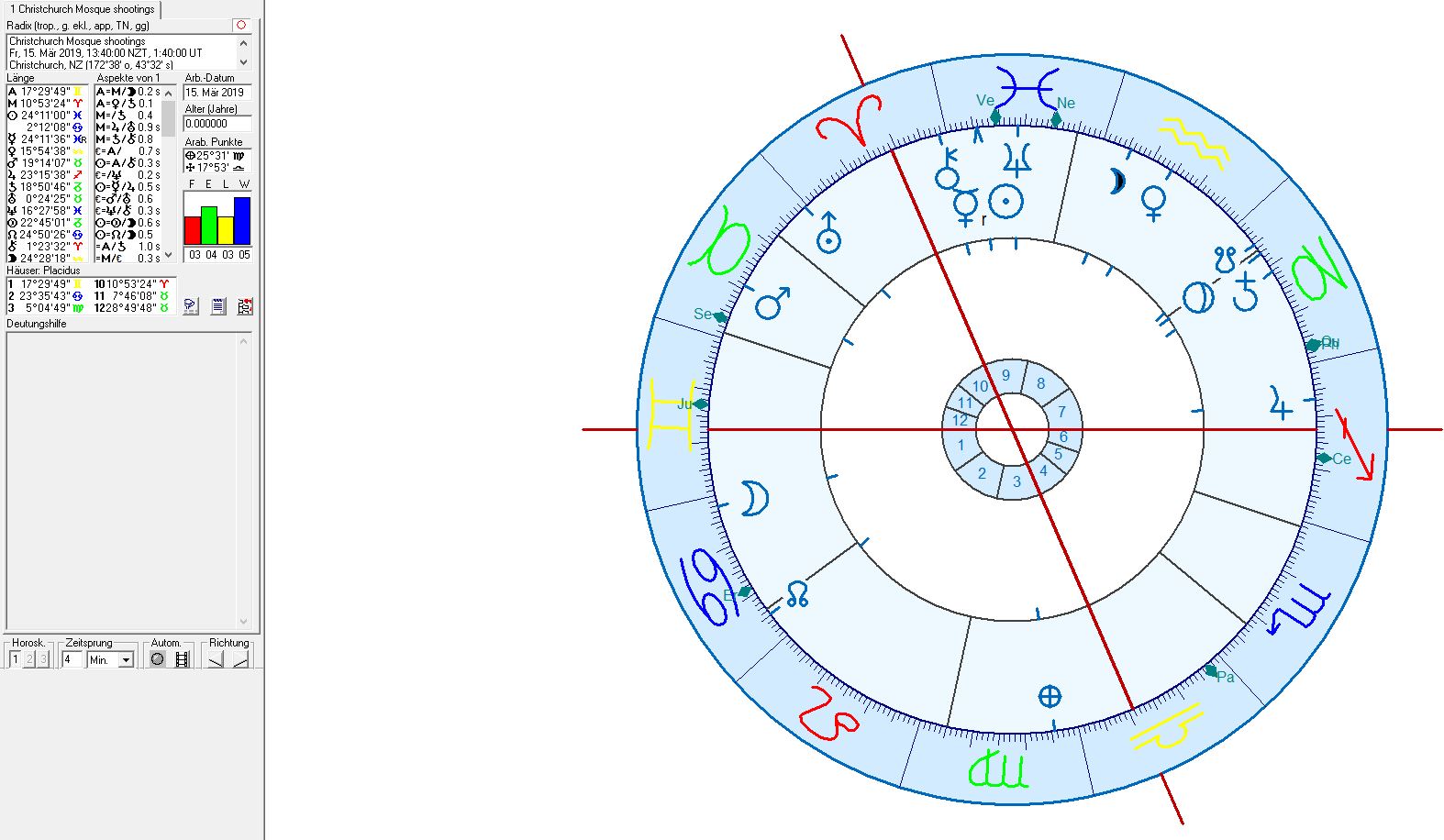 The Christchurch mosque shootings in astrogeography. Astrology, politics & terrorist attacks: Uranus opposite Christchurch during the massacre of March 15 2019

“The Christchurch mosque shootings were a series of white supremacist  terror attacks that occurred at Al Noor Mosque and the Linwood Islamic Centre in Christchurch, New Zealand, commencing at 13:40 on 15 March 2019 NZDT (05:40 UTC). At least 49 people have been killed in the shootings and at least 20 have been injured. Three suspects have been arrested with one charged.
A heavily armed shooter attacked the Al Noor Mosque in Deans Ave, Riccarton at around 1.40pm. The Al Noor shooter livestreamed 16 minutes of his attack on Facebook Live, where he identified himself as a 28-year-old Australian white supremacist. The guns used by the terrorist were covered in white writing that named people from history as far back as the Crusades who had been in conflict with Muslims. A second shooter attacked the Linwood Islamic Centre.”  (from the wikipedia article)

Astrogeographical resonance degrees for the City of Christchurch, NZ for morphogenetic field level 1 which describe the superregional. international resonance topics of the city: the resonance coordinates are 1°Scorpio and 25°Aquarius.

Retrograde Mercury was exactly conjunct the position of the Sun both on 24°11` in Pisces. The amalgamation of Mercury the planet of intelligent planning and acting with the Sun as the planet of personal self-expression, desires and self-centered emotions could indicate the desire to proof ones own skills, cleverness and supremacy esp. through its position in house 9 the house of victory, aims and of shooting.

For extreme violence and mass killings related to a 1°Cancer constellation compare the historical example of the chart for India`s and Pakistan´s independence from the UK – when an estimated 100.000 people or more were killed in riots between Hindus and Muslims. Compare my article: The astrogeographic position of Islamabad

– topics of globalisation – the outsourcing of local potentials to actors from abroad or acting as challengers of the local holistic potentials.

– projection of personal rebellion onto the outside to compensate blocks of individual development.

– since the last Uranus ingress in Taurus in 1934 started the Japanese invasion of the Pacific territories, China, Phillipines there may be a repetition of topics stored in the morphic field from that era. Uranus return brings back the “zeitgeist” of the thirties through the current global neofascist terrorist propaganda war supported by the current US president, Saudi-Arab armies of contract killers, Russian secret services propaganda machine and others taking the role of the german-japanese hate and war machinery of that era.

-the fact that the current phase of the Uranus cycle repeats the topics and experiences stored in the memory of the global morphic field of our planet from the years 1927-1948 the era of fascism and WW2.

The astrogeographical position of Wellington

Astrogeographical resonance degrees for the City of Wellington, NZ for morphogenetic field level 1 which describe the superregional. international resonance topics of the capital and goverment of New Zealand: the resonance coordinates are 1°Capricorn and 27°Scorpio.