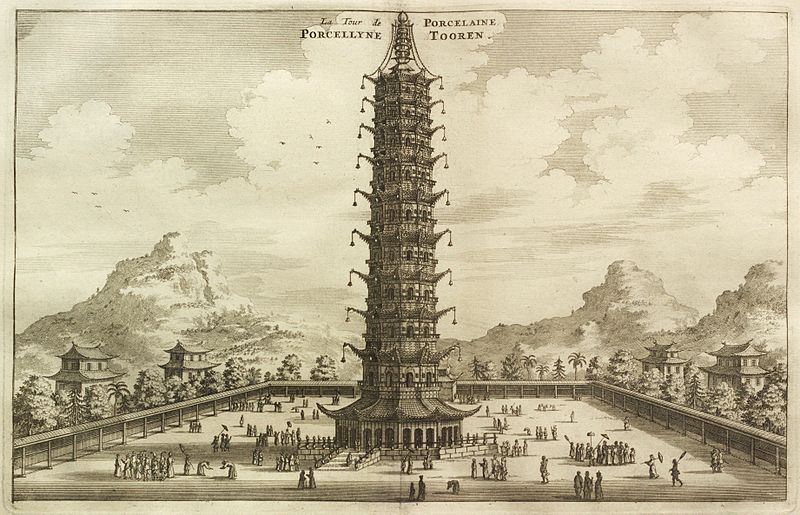 The Porcelain Pagoda of Nanjing. Taurus with Sagittarius as an image of burning clay and expansion of wealth.

Related articles: The Sacred Mountains of China in Astrology, Sagittarius and Capricorn – The Forbidden City in Beijing, Sagittarius as the sign of triumph and victory, “Tower of Ring” and the punctuation of the landscape, Burj Khalifa in Cancer with Taurus. An astrological history of skyscrapers,

The Porcelain Pagoda of Nanjing

During the early 15th century when In Europe porcelain was weighed with gold the Yongle Emperor of China ordered the 79 m tall Porcelain Pagoda Tower to be built with a complete porcelain facade.

Yangle was the 3rd emperor of the Ming Dynasty (1368 bis 1644). The period of his reign (1402–1424) marked a climax of successful stabilization of the Chinese Empire after centuries of Mongolian rule over China.

The octagonal Porcelain Pagoda Tower was erected in the legendary Great Bao’en Buddhist Temple of the former Chinese capital Nanjing.

The tower was originally built between 1412 and 1429 with white porcelain  bricks that reflected the sun’s rays during the day. and At night as many as 140 lamps were hung from the building to illuminate the tower. Glazes and stoneware were worked into the porcelain and created a mixture of green, yellow, brown and white designs on the sides of the tower, including animals, flowers and landscapes. The tower was also decorated with numerous Buddhist images.

Astrogeography of the Porcelain Pagoda of Nanjing

The astrogeographical coordinates of the construction site in earth sign Taurus as the sign of the earth, ground and clay with fire sign Sagittarius the sign of intentionally lit fires, cremation and all types of burning fires can be observed as a straight resonance of the production of porcelain as such.

Astrogeographical position for morphogenetic field level 3 (surrounding area) which explains the qualities and energetical topics of the whole of the large temple area: one coordinate of the construction site is located in solid, fixed earth sign Taurus sign of the earth, ground, clay (raw material for porcelain), money, income, wealth, food, markets and the possession of territories.

Sagittarius` resonance with success, victory, expansion and triumph indicates a tower-sculpture erected as a monument dedicated to the success in the expansion (Sagittarius) of wealth, income, territorial control and food production (Taurus topics) in the early Ming dynasty. Sagittarius seems to be a symptomatic factor of monuments dedicated to victories and success. The Porcelain Tower can therefore be examined as a victory column. compare the Arches of Triumph in Paris and Barcelona both and the Triumph of the Republic sculpture in Paris all located in Sagittarius.

Apart from that Sagittarius is also an important factor in all developments of style, design, fashion and ornaments marking the importance of the building as a first and only unique monument of such a size built from porcelain.

The function of emblematic towers in Chinese Feng Shui architecture

Compare my article: An astrogeographical history of skyscrapers.

Towers that overlook the surrounding area and buildings have a double function: A like antenna and as sky-scrapers they reach out for the awareness of heavenly perspectives. B they help to ground and stabilize the exchange between heaven (limits of potentials) and earth (grounding of potentials).

In regard to the knowledge of practical magic in Feng Shui culture, architecture and art the position in Taurus as the sign of the earth. grounding, growing roots and stabilization of the relationship between heavenly (cosmic) energies and earthly realms points at the function of a building dedicated to an energetical punctuation of the landscape with the energies, knowledge and impact of expansion of success (Sagittarius) in wealth and food production (Taurus).

Important astrogeographical examples of feng-shui architecture in Taurus of a similar purpose are: The Tian Tan Temple of Heaven in Beijing dedicated to the annual fertility rites celebrated by the Chinese Emperor located in Taurus with Capricorn: And the 64 m tall “Tower of Ring” acupuncture building in Tianjin located in Taurus and between Capricorn and Aquarius.

For a description of a concept of the punctuation of the flow of energies in landscapes through the information of monuments and sculptures compare the concept of Lithopuncture described by Marco Pogacnik.