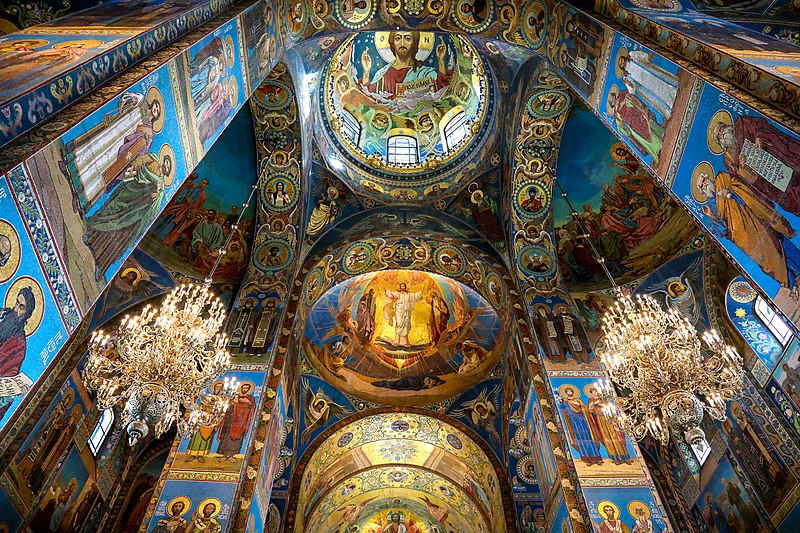 The Church of the Resurrection of Christ in St. Petersburg. Astrology, astrogeography, architecture and history: the “Church of the Christ on Spilled Blood”

Related Articles: The astrogeographical positions of St. Petersburg and Moscow, Catherine the Great at the Winterpalace in St. Petersburg, Libra and Capricorn – The Moskow Kremlin in astrogeography, Aquarius reaching for the sky: the Spire of Dublin, Taurus and Cancer – The Hagia Sophia as a Temple of the Earth Mother, Aquarius with Pisces: The Ship on the Hill.

The Church of the Resurrection of Christ in St. Petersburg

The officially named Church of the Resurrection of Christ (Собор Воскресения Христова) in St. Petersburg, Russia was built between 1883 bis 1912 by Tsar Alexander III as a memorial to his assassinated father Alexander II. The church is also known under names like “The Savior on spilled Blood” for its construction at the place where Tsar Alexander II. had been assassinated by members of the “Narodnaja Wolja” (“People`s Will”) movement on March, 13 1881.

Astrogeographical position of the “Church of Resurrection” for morphogentic field level 4 (exact position) which explains the energetical topics of the church building itself: one coordinate is in creative, holistic, spiritual air sign Aquarius the sign of the sky, heaven, paradise, abstraction, self- finding, rebellion, revolution, emancipation and of reconnection with the fuller potentials of humans. Aquarius is also a resonating aspect for the political topics of the assassination of Tsar Alexander III here as an important step on the way to the Russian Revolution of 1917. Aquarius is probably the most important astrological resonator for murals, graffiti and ceiling paintings because it allows painting the the world with one`s own idealism while breaking the rules and patterns of bourgeois and functionalist uniformity of style and design. Aquarius is also a resonator of the region of the City of St. Petersburg and of the foundation area of Russia for morphogenetic field level 1.

A fascinating aspect of the relationship of the title of a church as the “Savior on Spilled Blood” with Aquarius lies the role of Aquarius as the sign of spilling the waters of inspiration and information of the fuller awareness of human potentials relating it to the the cup-bearers of the gods. the Greek goddess Hebe and the god Dionysos. The rebellious and revolutionary impact of Aquarius may be found to resonate with the spreading of the waters of spirituality (Pisces) and the feeding of the godly aspect or at least with the fuller potentials of humans.

The 2nd coordinate is located in highly, imaginative, mystic, spiritual water sign Pisces the sign of mystification, dreaming, self-healing, illusions, legends, spirituality as such, music, art, meditation and the most important astrogeographical factor for temples dedicated to spirituality. As the sign of the oceans and of spirituality, Para-Brahman and Purusha itself Pisces symbolically relates to the waters spilled by Aquarius.

An important parallel with a place of national symbolism, state cult, rebellion and bomb blasts located in the combination of the two spiritual signs Aquarius and Pisces is the site of the Dublin Spire.

The Assassination of Tsar Alexander II.

“Alexander II had previously survived several attempts on his life, including the attempts by Dmitry Karakozov and Alexander Soloviev, the attempt to dynamite the imperial train in Zaporizhia, and the bombing of the Winter Palace in February 1880. The assassination is popularly considered to be the most successful action by the Russian nihilist movement of the 19th century. The assassination was planned by the Executive Committee of Narodnaya Volya (“People’s Will”), chiefly by Andrei Zhelyabov. Of the four assassins coordinated by Sophia Perovskaya (born Sep 13, 1861) two of them actually committed the deed. One assassin, Nikolai Rysakov, threw a bomb which damaged the carriage, prompting the Tsar to dismount. At this point a second assassin, Ignacy Hryniewiecki, threw a bomb that fatally wounded Alexander II” (from the wikipedia article).

During the assassination of Alexander II on 13 March 1861 Pluto the astrological ruler of bombs, traumatic issues, pain, hate, revenge, ideology was at 27°Taurus in exact mirror-point square to the astrogeographical resonance coordinates both of St. Petersburg at 3°Aquarius and of Moscow at 2°Taurus (morphogenetic field level 1- nationwide, global resonance).

The exact astrogeographical resonance coordinates of the bombing site itself (field level 4 – exact address) in Pisces-Aquarius were occupied by the Sun-Mercury conjunction in Pisces and Mars (planet of warfare) in Aquarius and heavily confronted through oppositions by Uranus as sign ruler of Aquarius (sign of uprisings, revolution, blasting of bombs) in Virgo and the Moon in Leo.

The conjunction of Jupiter the planet of aiming and shooting at targets with Saturn as indicator for precision of hitting targets in Aries the sign of warfare should be examined as a potential indication at the success of the assault. Especially because Jupiter was in exact trine position with the North Node as indicator of the outcome of the attack.

The position of Chiron as the sign ruler of the ascendant in Virgo exactly on midheaven may be examined as an resonating factor of the Sun position in Virgo in the natal chart of  Sophia Perovskaya who coordinated the bomb attack.

The design of the Church of Resurrection follows the style of the Moscovian Cathedral of Vasily the Blessed (St. Basil`s Cathedral) built 1555 to 1561. The official name is “Church of the Intercession of the Theotokos (Mother Mary), or the Protection of Our Most Holy Lady Theotokos and Ever-Virgin Mary“. It was built from 1555 to 1561 on orders from Ivan the Terrible and commemorates the capture of Kazan and Astrakhan.

Astrogeographical position of the “Church of the Intercession of Mother Mary” for morphogentic field level 4 (exact position) which explains the energetical topics of the church building itself: the church is located in the combination of the two female zodiac signs Taurus and Cancer representing the constellation of the “Earth Mother”. This astrogeographical aspect points at the resonance with the Hagia Sophia archetype of churches dedicated to state cult religion and the emotional, architectural. spiritual and political inheritance related to it.

The position in emotional water sign Cancer the sign of the moon, motherhood, pregnancy, conception, emotional independence, identity and authenticity, feeling at home, family and ancestor lines stands for the topics of motherhood.

Solid, fixed earth sign Taurus represents the sign of the earth, grounding, growing roots, agriculture, food, occupation and possession of territory, gravitation, centralism, energetical centers, wealth, income and central astrogeographical indicator for market places and town centers. Taurus stands for the topic of Moscow as the capital over the super-large territories of the Russian colonial empire. The importance of the position in Taurus includes the fact that Taurus represents one of the two astrogeographical resonating signs for the whole of the region of Moscow for morphogenetic field level 1.

This includes a parallel to the position of the St Petersburg Church of Resurrection of Christ for field level 4 (exact position) in one of the resonance signs for region (field level 1). This aspect is of importance in several ways: the competition between the two Russian capitals, their controversies and antagonisms but also their mutual reception and cooperation in the national morphic field. For further investigation into the relationship of Taurus with Aquarius compare my article: Lying or Flying – The Controversy between Taurus and Aquarius at the leaning Tower of Pisa.