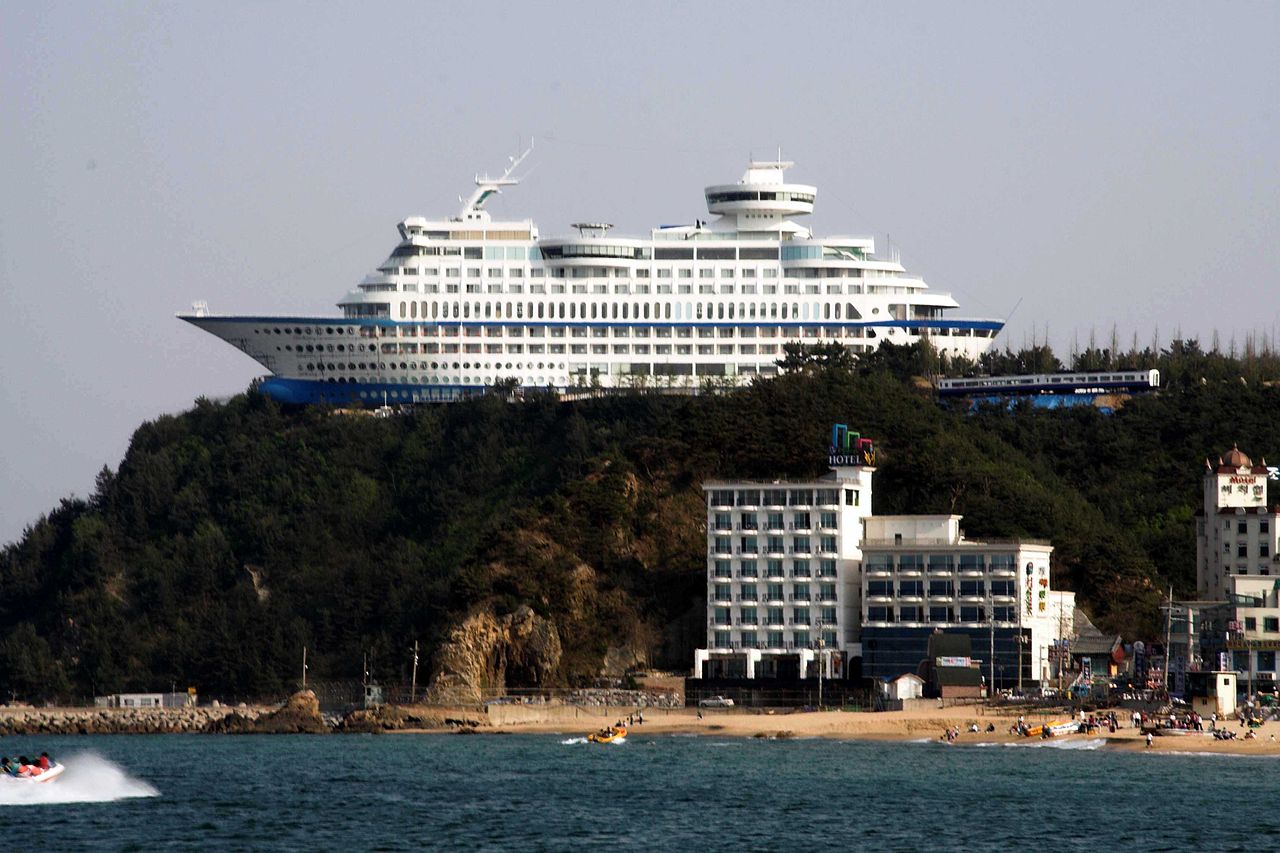 Aquarius with Pisces: The Ship on the Hill. Astrology and architecture: the astrogeographical position of a breath taking hotel design.

Compare: Astrology and architecture: characteristic features of Aries, Sidney Opera House in astrogeography, Scorpio and Pisces – The Guggenheim Museum ship in Bilbao,  Lying or Flying – The Controversy between Taurus and Aquarius in Pisa

Sun Cruise Resort & Yacht is a hotel in Jeongdongjin, South Korea designed as a cruise ship and built on a hill 50 m above sea level overlooking a beautiful beach. The ship house is 165 m long and 45 m tall.

Astrogeographic position for morphogenetic field level 4 which describes:the energetical situation, atmosphere and topics of the exact position of the hotel: the latitude coordinate lies in creative, innovative air sign Aquarius sign of the sky, heaven, paradise, flying, abstraction, provocation of habitual patterns of perception and the absurd, Bertholt Brecht´s alienation effect and going new unexplored ways. Though not the first natural indicator for motor ships Aquarius is also directly related to sailing and particularly to air and space ships. Thus Aquarius appears as the perfect indicator for the position of the ship on a hill high above the town and beach.

The longitude coordinate, valid for the full length of the ship house is located between mystic, spiritual water sign Pisces the sign of the ocean, imagination, dreaming, relaxing and holidays and highly energetic male fire sign Aries the sign of action, ignition, aggression, speed and sports. The sharp pointed ship-bow is a typical structural feature for Aries. A really fascinatingly typical example for this effect of places in Aries on the design of buildings particularly when combined with Aquarius is Sidney Opera House. The depiction of ships through architectural design at places located in Pisces is a frequent motif dealing with several symptomatic reflexes in Pisces as e.g. the fear of drowning, living on water, facing the uncontrollable, unknown, unconscious symbolized by the oceans.

Astrogeographical thoughts on the new 137-m tall rock guitar hotel tower built at Seminole Hard Rock Hotel & Casino in Hollywood, Florida: Futuristic, extraterrestrial aspects in the combination of Aquarius with Pisces and the difference of reflexes at work in these two signs.

Aquarius` need to turn things upside down and measure out reality

In its attempts to recapitulate the fuller dimensions of human potentials Aquarius can have a tendency that seeks to identify individuality and individualism, originality and origins through provocation and presenting contrasts to existing elements and habitual perceptions and expectations. But of course there is also the possibility that the method of seeking contrast and provocation itself is repeated without a living reconnection with the original, holistic and abstract perspectives. This is when the repetition of inspiration through fresh provocation and presenting contrasting images tends to dry out. This is when a increase of the dose of extravagance, provocation, shock, terror, violence, aggressive provocation is needed to trigger emotions needs to be increased.

Pisces – allowing us to be

Pisces is the sign of the ocean, the higher-self, reconnection with the perspective of spirituality and oneness, dreaming, sleeping and allowing the unconscious, imaginary and holistic aspects, holidays and of taking things easy. Pisces is also an important factor at the astrogeographical positions of Las Vegas (Pisces – Scorpio).

Astrogeographic position for morphogenetic field level 3 (surrounding area) which describes the atmosphere of the whole of the hotel area: one coordinate is in creative, innovative air sign Aquarius sign of the sky, heaven, paradise, escapes, self-finding, inventions, going new ways, inspiration and of trying to make a difference.

Hollywood, California in astrogeography
Hollywood, Californa is often compared to the resonance with Pisces because of its important role in the global film industries. And that general comparison is highly plausible. But from my my astrogeographical measurement and calculation systems the town area of Hollywood (field level 2) as part of the larger Los Angeles region (Field level 1: Sagittarius-Aquarius) has both resonance coordinates in highly magnetic, success-orientated fire sign Sagittarius the sign of style, design, fashion, ornaments, observation, searching, hunting, finding, euphoria, victory and of the cleansing fires of hell.Also meaning that in order to be successful in Hollywood a positive aspected relation with fire sign Sagittarius is of particular help.

Sidney Opera House was built in the constellation of creative, innovative air sign Aquarius sign of inventions, mutations, self-finding and inspiration with dynamic, male fire sign Aries sign of ignition, action, speed, strength, warfare, sports. This combination is valid for astrogeographical radius/field level 3, which shows how the construction site on a small peninsula is embedded in the surrounding area in the harbor of Sidney. This highly dynamic astrogeographical combination stands for mutation, innovation and attempts to materialize ideals and inspiration. It stands for starting something new and for the focus on direct action and revolution.  In regard to the function as an opera house it indicates that experimental art and architecture have more importance here than the mere listening and reception of sound or music itself. In this sense the site does not indicate a concert hall in the sense of a place for listening or feeling the music in the first place but rather a site for inspiration. The constellation may rather support rhythm and particularly the atmosphere of fire sign Aries could be to some extent in conflict with melody. No wonder that despite its name the building is a center for performances of all different kinds of arts. The building hosts 2 concert halls, 3 theatres and a couple of restaurants and bars. Before the beginning of construction work on the new opera house the construction site hosted a tram repair center.

The position in Aquarius is symptomatic for peninsulae especially when they are long and narrow.  Examples: Cape of Good Hope,  Gibraltar.

The roof consists of white elements that can be seen as pieces of oyster (pointed form) or egg (white colour) like shells and possibly also a ship´s sails or even its nose. Because their form unlike shells or sails is pointed into the air in a curved way so that their shape is a bit bent and thus kind of overstyled, there could even be the association of beaks or claws. This male – or as it is seen in feng shui – agressive element of form where energy and awareness are concentrated towards the tips is to be considered as a typical feature of fire sign Aries. Among other aspects Aquarius stands for the prominent and „far out“ position of the site on the tip of a peninsula that reaches out into the harbour. The association of the shape of the building with sails or tents would have to be seen as related to air sign Aquarius the sign of the wind and most important astogeographical indicator of sails as well as of tents.