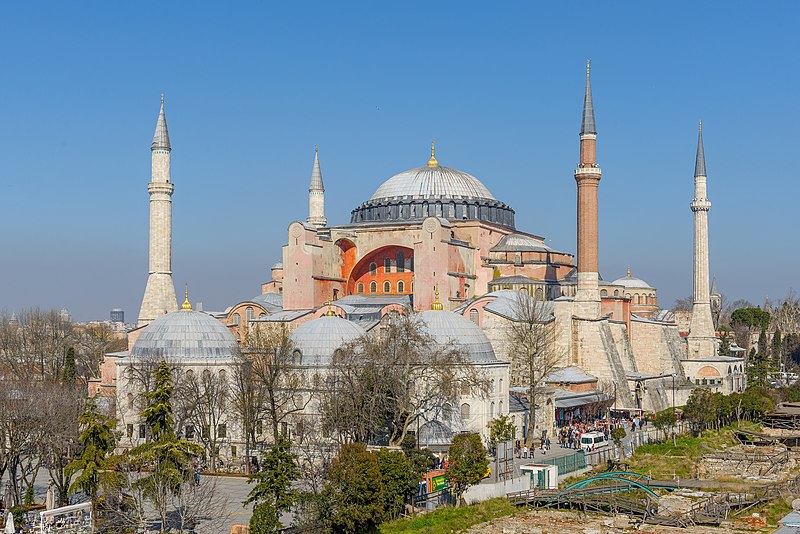 Taurus and Cancer – The Hagia Sophia as a Temple of the Earth Mother.  Astrology, Temples & Architecture : on the astrogeographical position of the Hagia Sophia in Istanbul

Related articles:  Cancer as the Sign of Seashells in architecture, The Egg on top of Dali´s House in Cancer – and other examples for Cancer as the sign of eggs and the uterus, Hoover Dam in astrogeography, A WW2  “flak” tower in the sign of the crab, The paradox of the design of Burj Khalifa and its astrogeographical position in Taurus with Cancer, George Van Tassels Integraton Project at Joshua Tree, California

Hagia Sophia was built as an orthodox christian cathedral between 532 and 537 AD. A fascinating aspect of its unique architectural design is that even though the building is really tall (56 m) the ensemble of the central dome with the smaller cupulas on the sides deliver a breathtaking image of a central dome which sort of “organically” rises up from the ground. The big dome has 31 m diameter.

Hagia Sophia means Holy Wisdom. Considering Taurus (earth mother) and Cancer (pregnancy) as the two signs of motherhood the aspect of holy wisdom that is reflected by the astrogeographic position of Hagia Sophia  is the wisdom of motherhood. The inauguration of the unique dome was celebrated on December 24, 562 during a conjunction of Mars, Jupiter and Pluto in creative, innovative air sign Aquarius the sign of the sky, heaven, paradise, inventions and flying which must have stood for the unique way the dome ewas built.

Astrogeographic position for morphogenetic field elvel 3 which describes the atmosphere and energetical topics of the building: the construction site is located in the combination of self-protective, emotional water sign Cancer the sign of emotional individuality and identity, motherhood, pregnancy, fertility, the uterus, caves and feeling at home  with the highly profitable, solid, fixed earth sign Taurus the sign of the earth, grounding,  gravitation, mass, growing roots, market places, food, agriculture and the attractivity exerted by local energetical centers.

The 4 minarets as a male (long and pointed)  phenotype were  not part of the original building, but have been added as a feature of Mosques when the Hagia Sophia was turned into a Muslim temple. As ornaments of most larger mosques they are no valid indications for the astrological constellation of the site.

According to my experience in astrogeographical field studies Cancer especially if combined with Sagittarius the sign of round shapes and forms can be understoof as the mother sign of cupulas and domes. The astrogeographic position of  the Pantheon the largest dome on the planet for 13 hundred years and located in Cancer with Sagittarius is a strong example here.

The Pantheon in Rome built between 113–125 AD with 43.4 m diameter in Cancer with Sagittarius was the largest dome on earth for 13 hundred years.

Related arcticle: Comparison of the inauguration charts for Hagia Sophia and Burj Khalifa

At the time of its construction the building represented a highly innovative structuree due to its unique dome and overall proportions.

The inauguration was held during a Sun-Jupiter-Pluto conjunction – a strongest constellation in Capricorn the sign of control, professional skills and longevity  The Moon in Taurus and right on the astrogeographic position of the construction site was in  harmonius trine to the Sun-Jupiter conjunction of the day, suggesting that the day had been determined through astrological election. The Moon in a careful, supportive trine to the dominant constellations of the Sun and other planets in Capricorn seems a plausible and useful parallel with the Sun – Moon trine from the Burj Khalifa inauguration chart.

Hagia Sofia was turned into a mosque on a day with Mercury, Chiron, Uranus and Mars on the astrogeographical coordinate of the construction site in Cancer and Venus on the one in Taurus. The Mars – Uranus cj.  in Cancer stands for mutation, revolution, cutting of roots and attempts to leave the emotional inheritance, tradition and ancestor lines connected with the place behind. A day was chosen when the Moon in mystic, spiritual water sign Pisces the sign of reconnection with the spiritual plane, spirituality itself and thus the actual aspect that unites all religions passed the exact trine with the position of Mercury in Cancer. The decision for this astrological constellation is a clear hint that the date was determined by careful and skillful astrological election.

But nevertheless the choice of that Pisces Moon position for the change of the ruling professional magic, dogma and creed at the site was a trick to hide the intentions behind Mercury of course. This is because Mercury as the ruler of the position of the Sun in the center (16°) of Gemini the sign of atheism, technology, practical solutions,magic,  signposts and symbols carried with him the full impact of the position of Pluto the planet of social hierarchy, absolutist dogma and control over foreign territory (Scorpio) in Leo the sign of human self-centeredness, self-esteem and appeal for royality.

The  day the Hagia Sophia was turned from a mosque into a museum saw 4 planerts and the North Node in Aquarius the sign of the sky, abstraction, revolution and a strong indicator for the change of status. In fact at 12:00 noon Mercury was at 29°56` Aquarius and just about to ingress into Pisces the sign of spirituality above all religions.

Astrogeographical position of central Istanbul for morphogenetic field level 1 which describes the city`s supraregional and international resonance and topics:  Istanbul is located at 16° of earth sign Capricorn and 6° of water sign Cancer.

The position of the Moon ruler of the 6°Cancer position of Istanbul at 10° Capricorn was near the 16°Capricorn degree indicating a moment in history when the whole city turned into its own center and grounding.