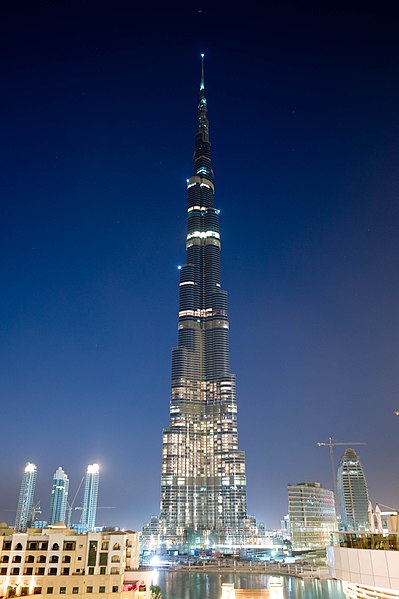 Burj Khalifa in Astrology. An astrological analysis & evaluation of the tallest building on our planet in the history of skyscrapers. Find out How Burj Khalifa represents a re-connection with the astrological indicators of Romanesque architectural idols like Hagia Sophia.

The early skyscrapers of the modern age such as the Empire State Building saw the tallest buildings in the astrological signs of height: Aquarius the sign of the sky and Capricorn the sign of mountains.

But the new era of skyscrapers that was started in the 1970ies reveals a different topic and function: now it is Taurus the sign of profitability and growing roots in the ground that seems to guarantee their stability. Burj Khalifa was the climax of that era. Its astrogeographical positions show the concept that the re-connection of skyscrapers with the solid ground and the land around them could function as factors that help ground the tallest buildings.

Burj Khalifa  the tallest building on earth is located in Taurus and Cancer the  astrological indicators  of Romanesque architecture.  But in fact it`s design resembles quite the opposite of that style. In regard to the polarity between Romanesque and Gothic architecture the Burj tower could rather be thought of as aiming at the Gothic architecture ideals of form: reaching out for new heights and the sky and light. Read my interpretation of the potential that lies in this controversial choice of a construction site.

Which signs would you trust for the construction of supertall buildings?

Adrian Smith – architect of the 2 tallest buildings on the planet: Burj Khalifa and Jiddha Tower was born with 6 personal planets in highly alert, cautious Virgo the sign of careful strategical planning, intuition for dangers and the quest for self-protection

The sun position in Adrian Smith`s chart on the royal degrees between 26° and 29°Leo relates to the fact that the emblematic super tallest towers are built in absolutist monarchies. Compare: the astrogeographical position of the Saudi Arabian capital Riyadh in double Leo.

The Astrogeographical positions in detail

With a height of 828 meters Burj Khalifa in Dubai City is the highest skyscraper on this planet. Construction work was started in 2004 and the official inauguration held on 4 January  2010.

Astrogeographical position of Burj Khalifa for morphogenetic field level 3 which describes the atmosphere and energetical topics of the construction site and building and how it is embedded in Dubai City: the construction site is located in the combination of self-protective, emotional water sign Cancer the sign of emotional individuality and identity, motherhood, pregnancy, fertility, the uterus, caves and feeling at home  with the highly profitable, solid, fixed earth sign Taurus the sign of the earth, grounding,  gravitation, mass, growing roots, market places, food, agriculture and the attractiveness exerted by local energetical centers.

Cancer, the principle of emotional individuality should be considered here as the condition of the architecture of modernity, Just as if the functionality of buildings in general and the innovation of construction techniques could only be justified by introspection and a solid foundation in emotionality. This would indicate that without the participation of the zodiac sign Cancer a building might to some extent lack the ability to survive. And even if the building itself would not need the element of emotional care (which Cancer stands for) then the human individuals and living beings may well appreciate its stimulation inside of the building. In astrogeographical field studies I have often noticed that plants and animals tend to be in a better shape in morphogenetic fields that resonate with the sign of Cancer, than they are in the neighbouring fields. Compare: Cancer as the sign of seashells in architecture.

The combination of these two female astrological archetypes stands for the image of an Earth Mother as in the case of Hagia Sophia which represents the strongest and ultimate astrogeographical example for this astrological combination.

This astrological constellation can not be regarded as symptomatic of the height of the building because the air signs (Gemini, Libra, Aquarius) are not involved. Energetically it rather describes the location as a place of grounding energies (Taurus) and stands for the tendency of the place as focused on centering on the inside (Cancer) and on occupying the ground itself (Taurus). The example of the Hagia Sophia and also the Pantheon in Rome (Cancer-Sagittarius) as comparatively tall buildings but with a special focus on the inside suggest Cancer and Taurus as resonators of classical romanic architecture. The innovation here lies in the fact that the glass & steel architecture of Burj Khalifa contradicts the ideals of romanic architecture.

The Gravity of Taurus

A fascinating example of how the controversy between earth sign Taurus the sign of grounding and air sign Aquarius the sign of reaching for the sky is  reflected in the history of architecture is the Leaning Tower of Pisa. In physics as well as in psychology Aquarius relates to the centrifugal forces which means its natural direction is to move away from the axis of rotation of the earth. This means Aquarius seems  to move away from centralistic ideas and tendencies and seek to free individuality from the social status at the center of society. Taurus on the other hand stands for centripetal forces which as defined by Isaac Newton represents  “a force by which bodies are drawn or impelled, or in any way tend, towards a point as to a centre”. In this sense the leaning position of the Leaning Tower of Pisa represents a middle course between these two extremes. This leaning position has become static for 700 years now. For a deeper understanding read my article on the centrifugal reflexes of architectural design in Aquarius.

Although technical innovation (air signs Gemini + Aquarius) was of course a major topic in the construction of Burj Khalifa the astrogeographical position suggests that material (Taurus) and emotional  (Cancer) stability and independence represented the superior topics for the choice of the construction site.  The site “feeds” Burj Khalifa with the topics of a traditional market place (Taurus) and a place of feeling at home (Cancer). Cancer as the sign of the navel (of the world) indicates the choice of a site that supports the emotional self-esteem and independence from the hype of technological modernity and superiority in other parts of the world.  Taurus as the principle of growing roots is a symptom that the site was selected to support the physical as well as the financial stability of the building. In fact Burj Khalifa represents the climax of an architectural era in which the tallest buildings on earth were mostly built in that sign.  Not only Burj Khalifa but also the 2nd and 3rd tallest building in the world as of 2013 were built in Taurus. I`m recommending my article on the astrogeographical history of skyscrapers for more data and interpretations of these topics.

The Tallest buildings on the planet

In the new era skyscrapers are not so much of a technical experiment, revolution and contrast their relation to financial stability, sources of income and the stability of the ground below the building have become more important.

Jeddah Tower the newest candidate for the tallest building in the world is currently under construction in the combination of fire sign Leo with water sign Scorpio. Its maximum height will be 1138 m. Its design may seem a copy of Burj Khalifa.

Leo and Scorpio the topics of Jeddah Tower are in square and opposition – aspects of tension and contrast  – to the Taurus factor. This suggests that its purpose is in contrast to the function of buildings in the Taurus era of skyscrapers. And it may suggest a lack of profitability or at least a lack of an effective concept for profitable use as a problematic issue of the Jeddah Tower project.

The inauguration charts for Burj Khalifa and Hagia Sophia

“At 7.55pm JB:  Sheikh Mohammed (born  22. Juli 1949 with Sun, Mercury and Uranus in Cancer) as officially declared the Burj Dubai open and there is huge applause. He unveils a plaque to celebrate the event. The bagpipes are in full blow.” (source)

Burj Khalifa was inaugurated with 4 planets plus the North Node in solid, conservative earth sign Capricorn the sign of control, stability, rules and regulations, government institutions and professional skills. Most of them in house 6 the house of careful planning, self-protection and optimal use of resources. The Moon was in Virgo a sign that also represents an indication of self-protective, careful strategical planning. It has to be stated that these constellations seem orientated at protection of the building.

The Chiron, Neptune, Jupiter conjunction in the last decade of Aquarius the sign of the sky, heaven, paradise, abstraction, self-finding and connecting earth and sky. It is the position of Jupiter on 27°Aquarius a degree that points at the climax of an outlook on new dimensions that most strongly resonates with the superior height of the building.

The choice of a date with a Saturn – Pluto square does not seem fully appropriate if not to say highly problematic for the stability of the structure. But comparison to the dramatic Mars-Uranus square of the Hagia Sophia inauguration may relativize that. Anyway that SAT-PL square aspect indicates the plan and the need for permanent calls for strongest supervision of the building structure. In the case of the Hagia Sophia the Mars-Uranus square must have resonated with the frequent earthquakes in the area. In the case of Burj Khalifa instability may seem not to come quick and unexpected but slowly and unavoidably. Altogether the Moon in Virgo should stand for a highly suspicious alarm system.

Since Hagia Sophia is located in the same astrogeographical constellation I`m presenting the comparison with its inauguration chart here. It has to be understood that the building at the time of its construction due to its unique dome and overall proportions represented a highly innovative building.

The inauguration was held during a Sun-Jupiter-Pluto conjunction – a strongest constellation in Capricorn the sign of control, professional skills, and longevity  The Moon in Taurus and right on the astrogeographic position of the construction site was in  harmonious trine to the Sun-Jupiter conjunction of the day, suggesting that the day had been determined through astrological election.

The Moon in a careful, supportive trine aspect to the dominant constellations of the Sun and other planets in Capricorn seems a plausible and useful parallel with the Sun – Moon trine from the Burj Khalifa inauguration chart.