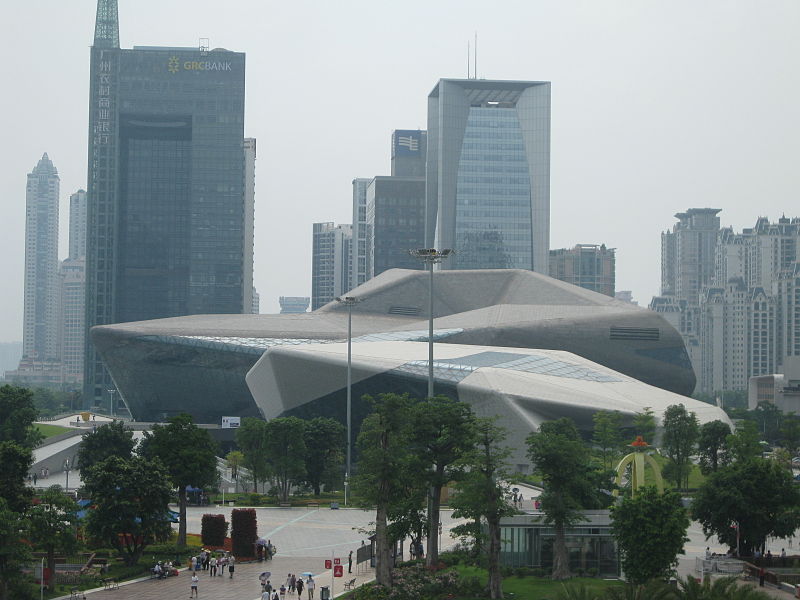 Architecture, Astrology and Places: Zaha Hadid. An introduction to the astrology and astrogeography of Zaha Hadid´s buildings, style, design and the resonance with the construction sites.

Zaha Hadid made concrete flow.  Her “buildings are distinctively neofuturistic, characterized by curving forms with “multiple perspective points and fragmented geometry to evoke the chaos of modern life”.[2]

Zaha Hadid was born on 31 October 1950 in Baghdad, Irak. She died of a heart attack in a Miami hospital on 31 March 2016,  where she was being treated for bronchitis.

Zaha Hadid was born with the Sun conjunct Venus and Mercury in Scorpio the sign of sculpting, imaging, stone masonry, welding, alchemy, steel enforced concrete  and construction work. The position of the Sun fell in a trine to the 2nd most important known astrological factor the Moon in emotional water sign Cancer the sign of its own rulership. I see Cancer as the sign of emotional individuality and personal individual needs and thus as the factor of separation from others as the most important astrological factor and even the condition for modernity in art and architecture. This conclusion may not fit with the traditionalist views on the sign but is a clear conclusion from my experience in karmic astrology, astrological psychosomatics, astrological psychology and particularly of course from field studies in astrological geomancy.

Cancer`s role in architecture would be an approach to seeking a way of feeling at home at places, concentrating on the inside and content and seeking for emotional resonance and identification with buildings whereas Scorpio concentrates on the compact, solid and hard-wearing structures. Like is the case with all the 3 water signs the reflexes of Scorpio and  Cancer are highly defensive. In regard to the forms they generate at places both signs have a tendency of covering up a building and avoiding open glass facades. Compare the examples from my blogs about architecture in Scorpio and Cancer from the list below.

Zaha Hadid´s role as the first and only super-successful woman in the history of architecture could arguably have been caused though the Sun in Scorpio the sign of resistance against gender role attitudes along with Pluto in Leo the sign of the right of a royal self esteem.

The consideration of the Moon-Uranus conjunction and even more so because its position falls in Cancer should definitely play a major role in any approach to understanding Zaha Hadid`s approach to architecture. This is because in architecture water sign Cancer and its ruler the Moon are the first factors to be examined when it comes to understanding the psychology behind a building and the reflexes at work in regard to feeling at home, nest-building and the “living identity” of houses.  Furthermore the Moon together with the emotional landscape also describes the natural conditions in which an architect feels at home. In this regard the Moon in Cancer stands for the natural habitat of crabs which means coasts, beaches, places near a spring, well or any other type of water.

Technically Cancer as the sign of the uterus indicates the reflex to seek a closed up room and protected world inside of a shelter.  But if in conjunction with Uranus as the significator of the open sky and sleeping without a roof indicates the need to go through a rebellion against being trapped in the more tight places. It is this Uranus aspect that often serves as the more profound and permanent factor for the rebellion against the occultism of traditional  forms.  And Cancer is in some ways an ideal terrain for Uranus when it comes to art & architecture. This is because Cancer reconnects the mere reflex of rebellion and any purely functionalistic technical innovation with the felt and grounded needs of the emotional and the soul. This reflex of Cancer and the Moon can play the role of the decisive factor for selecting quality from the quantity of the proposed innovations created in the signs of innovations particularly air signs Aquarius and Gemini.

I wonder If it can be avoided that an architect`s constellation of tension like the Saturn – Mars square in Zaha´s birth chart has any affects on the atmospherical situation inside of a building or even the stability of structures.  But then in this case it has to be considered that Saturn`s position at 28° Virgo falls on a degree of personal austerity, lastingness and even sustainability together with an extremely anxious and careful approach to the planning and realization of projects. That Saturn is in a square with Mars in Sagittarius the sign of style, design, fashion, composition and the urge for winning and surpassing.

In Zaha Hadid´s birth chart Jupiter the planet of understanding, mental triumph, happiness and luck was placed on the 27th of the 30 degree of creative, innovative,  rebellious, spiritual air sign Aquarius the sign of inspiration, self-finding, abstraction, revolution and retracing the fuller amount of our true potential. The last degrees of Aquarius are known to represent the part of the zodiac where the full quantity of the inspirational and innovative impact of Aquarius` function as the sign and process of inspiration culminates.

On the astrogeography of Zaha Hadids buildings and design

The Heydar Aliyev Center in Baku, Azerbaijan is located in the combination of highly energetic, centralistic, emotional, royal  fire sign Leo the sign of self-expression with technology orientated air sign Gemini the sign of communication, learning, interfaces, technological innovation, road crossings and signposts. Both signs do not stand for the flowing form of the concrete roof itself but rather propagate the right and appeal for experimenting with new forms. Leo as the sign of light puts the focus on the intensity of innovation in experimental architecture. Gemini plays the role of pointing at the signalling effect of the architecture as a signpost of the new modern era in the country.

The wave-like shape of the Heydar Aliyev Center directly relates to the waves in the astrological symbol for Aquarius and through that to the position of Jupiter the planet of personal success in Zaha Hadid`s birth chart. This constellation could indicate that despite the personal success gained through the realization of the  Heydar Aliyev Center project Zaha Hadid sought a fundamental experience of liberation through this particular project.

Phæno Science Center in Wolfsburg, Germany completed in 2005 has one coordinate in Gemini the sign of functionality, information, learning, sign-posts and technology in general. The second coordinate lies in between service orientated air sign Libra sign of openness, relationship and stages and solid, durable water sign Scorpio.  The combination of Gemini as the sign of schools with Libra as the indicator for interactive use stands for the purpose of the institution as place of education and learning. This constellation is valid for morphogenetic field level 4 which describes the atmosphere of the building itself.

The fact that the air passes through underneath the building is to be seen as an aspect of the position in 2 air signs and particularly in Libra.  Both signs Gemini as well as Libra are also the main indicators for bridges.

Wangjing SOHO is a complex of three curvilinear asymmetric skyscrapers in Wangjing, a suburb of Beijing, China located on the way to Beijing International Airport. Zaha Hadid called the towers a “welcome and farewell to Beijing”. The project area is really large so that the constellation for field level 3 must be observed here. One coordinate is located in between dynamic, male fire sign Aries sign of action, speed and new starts and earth sign Taurus sign of profitability, grounding and growing roots. The second coordinate too is located in Aries.  The rounded off corners of the 3 towers may  not be expected as the most typical feature of the role of Aries as the first and most important male sign, which is often signaled by particularly sharp edges. But the rounded off shape itself is not necessarily a contradiction to Aries as I have showed in my blog about Aries as the Sign of Unicellular Structures.

Astrogeographical position for morphogenetic field level 3 which describes the atmosphere of the building an how it is embedded in the city: in the combination of spiritual water sign Pisces the sign of music, art, temples, dreaming,  imagination and the most important astrogeographical factor for opera houses. The second coordinate here lies in dynamic male fire sign Aries sign of action, speed, aggression and new starts. The combination of Pisces the sign of music with Aries the sign of action stands for a combination of flowing forms with pointed, sharp and edgy elements.

Take the examples of the round shape of Beijing Opera house for a Pisces ideal and the pointed white claws of Sidney Opera house and combine them to get to an understanding of the forces at work at Guangzhou Opera House.

The Eli and Edythe Broad Art Museum (colloquially The Broad MSU, not to be confused with The Broad in Los Angeles), is a contemporary art museum at Michigan State University in East Lansing, Michigan. It opened on November 10, 2012.

Eli and Edythe Broad Art Museum has one astrogeographical coordinate right between earth sign Taurus the sign of grounding, gravitation, local energetic centers, market places and growing roots & air sign  Gemini and the 2nd coordinate in Gemini too. The astrogeographical position of the site of an art museum in Taurus appears as a topic of grounding the social acceptance and cultural value of a particular local artist and of art in general. Taurus does not necessarily support the intellectual pleasures and observations gained from contemporary art – but rather the “collection thing” or else the touching of art with ones own hands. It would be the role of playful Gemini the sign of learning, information, signposts, communication and bringing opposites together wich could support the educational purposes of such a museum.

It is really fascinating that the building appears to be bent towards the west half which lies in Taurus. Taurus as the sign of the earth seems to manifest as a factor generating gravitation whereas neutral air sign Gemini appears to be drawn towards the Taurus side by that signs “centripetal forces”. This kind of a gravitational effect of Taurus when combined with an air sign can also be observed at the phenomenon of the Leaning Tower of Pisa located in Taurus with Aquarius.

The perspective from the west side located in earth sign Taurus provides the opportunity to get an impression of the building as a massive, heavy load that stands out above the spectator. This perspective is to be observed as an archetypal image for Taurus.

Architecture & Astrology in my astrogeography blog

For the role of Cancer compare:: Cancer as the Sign of Seashells in architecture, The Egg on top of Dali´s House in Cancer – and other examples for Cancer as the sign of eggs and the uterus

For the role of Scorpio compare: Astrology and Art : Scorpio as the sign of sculpting,  Architecture & Astrology: the polarity of Aquarius with Scorpio,

For the role of Libra compare: Architecture & Astrology: Libra as the sign of symmetry,

For the role of Sagittarius compare:  Astrology & Architecture: The Lucky Coin Structure in Sagittarius,

For the role of Virgo compare: The “Crooked House” and other objects of art in Virgo,

Fort the role of Pisces compare: Pisces as the sign of opera houses,