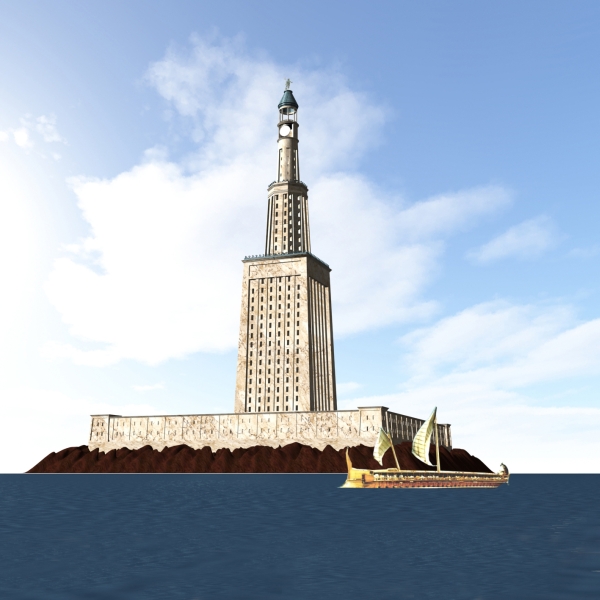 Related articles: The Karnak Temple of Amun Ra in Capricorn with Taurus, Towers in astrogeography. – from my picture book in pinterest,

The Lighthouse of Alexandria was the tallest (estimated 120-150 m) lighthouse of its time and was considered one of the seven wonders of the ancient world. It was built between 300-279 BC. under the Pharaohs Ptolemy I and Ptolemy II on the tiny island of Pharos just off the coast of present-day Alexandria. It stood on a 190 meter long and equally wide square base plate made of granite.

Astrogeographical position of the lighthouse of Alexandria for morphogenetic field level 3 (surrounding area) which desribes the energetical topics of the lighthouse itself and how it is embedded in the surrounding area: the site is located in the two solid earth signs Capricorn and Taurus The combination of the two earth signs Capricorn and Taurus is particularly interesting for the site of a lighthouse as one main function of lighthouses is to help navigators find a way back from the sea to a safe landing (grounding) place. Both signs have a tendency to aim at establishing a relative stability.

Lighthouses do appear in all zodiac signs. The constellation of astrological signs where they are built describes their function. If for example a lighthouse is located in the combination of two water or two air signs the symbolic meaning would be that it has been built into the water or into the air. This constellation in two earth signs so indicates that the site was chosen for constuction as a signal of stability, safe ground and control.

Capricorn as the sign of checkposts, fortresses, government  institutions, conservativism, defending old traditions, structures and hierarchies is archetypal for stabilization anyway.  As can be observed in the example of El Capitan it is also to be associated as the indicator for a ship`s captain`s bridge as the command and control center. And as the most important indicator for guardians it also stands for the strategical importance of the construction site of the Lighthouse of Alexandria.  Furthermore Capricorn is also the indicator for the large granite rock base on which the lighthouse tower was erected.  For granite and other hardest rock formations in Capricorn compare: Capricorn and Leo – Mount Rushmore National Memorial. Ailsa Craig granite, El Capitan granite mountain in Yosemite National Park, Pointe de Penhir en Bretagne, Ship Rock, Morro Rock, Matterhorn.

El Capitan granite mountain in Yosemite National Park: both coordinates are exactly between Capricorn and Sagittarius and near the zodiac degree of the winter solstice which relates to thesite of checkposts thast control the connection between two worlds, governments and a ship`s Captain`s bridge.  Compare my articles: The Little Mermaid as a Guardian, Heaven`s Gate on the point of the winter solstice,

Another valuable example for the stability and durability of a lighthouse in Capricorn is the Hercules Tower in La Coruña built during the 2nd century AD.

The position of a lighthouse in dynamic fire sign Sagittarius the sign of watching and thinking stands for the function of a lookout tower and also indicates the importance of the signal fire and the potential function as a fire temple like in the case of St Catherine’s Oratory Lighthouse (wiki) on the Isle of Wight:

The 2nd coordinate of St Catherine’s Oratory (pinterest entry) built in 1328 on the Isle of Wight falls in emotional water sign Cancer the sign of coming home, motherhood and celtic culture and an indicator for an emotional and even melancholic reflection which helps sailors find the way back home here.