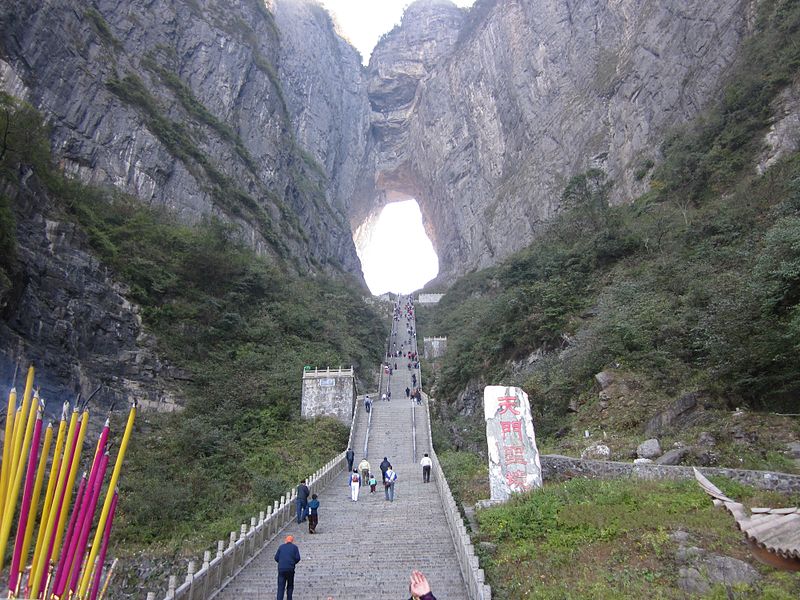 Related articles: Astrogeographic position of Beijing – transits for the capital of China, Sagittarius and Capricorn – The Forbidden City in Beijing,  Astrology and Sacred Sites: The Sacred Mountains in China, White Horse Temple – the first Buddhist Temple in China, Astrology and Sacred Sites: The Longmen Grottoes at Luoyang, The Legendary Shaolin Monastery, The Lucky Coin Structure in Sagittarius, The Tian Tan Temple of Heaven in astrogeography

Astrology & Sacred Sites:  Heaven`s Gate on the point of the winter solstice

0° Capricorn – the degree of the winter solstice stands for a gate between the realms of autumn (mental plane) and those of winter (spiritual plane). Openings in mountains and buildings often mark passage between their worlds.

Heaven`s Gate is a natural hole and gateway on top of Tianmen Mountain in the north-western province of Hunan, China.

Astrogeographic position for morphogenetic field level 4 which describes the atmosphere and energetical topics of the mountain gate itself: the gate is located right on the actual degree of a “check-post at the gate of heaven”  which lies on the cardinal divide and winter solstice point of 0° Capricorn. This is the astrological degree where St. Michael and St. Peter are the mythological guardians between the world of human perception of the mental plane (Sagittarius) and the non-dual sphere of the spiritual plane (Capricorn)  When climbing up the stairs the pilgrims are approaching this entrance to heaven from the south.

The 2nd astrogeographic coordinate of the gate falls in dynamic, male fire sign Aries the sign of action, speed, warfare, mobilization, sports and the start of new undertakings.

For the position on a cardinal divide compare also: From Gemini into Cancer – a Pathway into a Vagina, Bighorn Medicine Wheel in Capricorn and Aries, The Little Mermaid as a Guardian

The direct resonance with the Temple of Geaven in Beijing

Compare: The Tian Tan Temple of Heaven in astrogeography

The Tian Tan Temple of Heaven in Beijing is located 1300 km north-east of the Gate of heaven on Tianmen Shan. These two sites are in direct resonance with each other through their position on 0°Capricorn.

Sheraton Hot Spring Resort on the divide of the autumn equinox

Astrogeographical position for morphogenetic radius/field level 3, which describes how the site is embedded in the surrounding area: Sheraton Hot Spring Resort was built with its midpoint on the cardinal degree of 0° Libra in such a way that the western half falls in the earth sign Virgo and the eastern half in the service orientated air sign Libra the sign of beauty, decoration and relationship and main indicator for Chinese culture. The 2nd coordinate is right in the center of solid, conservative, strict earth sign Capricorn indicator for the stability of the indvidualistic and unprecedented form of the building.

The Arc de Triomph as a gate between Sagittarius and Capricorn

The Arc de Triomph de l`Etolile inaugurated on 29 July 1836 honours those who fought and died for France in the French Revolutionary and Napoleonic Wars, with the names of all French victories and generals inscribed on its inner and outer surfaces.

Astrogeographic position for morphogenetic field level 4 (exact position) which describes the atmosphere and energetical topics of the sculpture itself: in Paris is located on the last degrees of Sagittarius the sign of victory, triumph, success, expansion, arches, healing, aiming, shooting, style, design, fashion, thinking and round forms making it a symbolical gate into solid, conservative earth sign Capricorn the sign of effective reality, governments, stability, history, traditions, the ruling classes and state cult. For the atmosphere and function of buildings as check-posts between two worlds compare my article: The “Little Mermaid” as a Guardian.

The 2nd coordinate of the site is in practical air sign Gemini the sign of signposts, learning, communication, information, advertisement, road-crossings, hands, instruments, technology and indicator for the 2 identical twin elements that make the monument. As an air sign Gemini stands for the air and road (pathway) that passes beneath the monument.

Arc de Triomf in Barcelona between Sagittarius and Capricorn

The Arc de Triomf in Barcelona is another example for an object of art in the cardinal position of the first degree of the earth sign Capricorn indicating a check-post at the entrance to another world. The position is next to the end of Sagittarius the sign of triumph & victory and of arches. When passing the Arch it either marks an entrance to the world of triumph (Sagittarius N-W) when you are moving to the northwestern side or a world of enduring hardship (Capricorn S-E) if you are heading southeast. The 2nd coordinate is in the defensive water sign Scorpio indicating a fortress character of the building. Both are valid for the morphogenetical field level 4 which describes the building itself:

Astrogeographic position the Atlantis Hotel for morphogenetic field level 3 which describes the atmosphere, energetical topics and the way the site is embedded in the surrounding area: Hotel Atlantis occupies the central position on the top of the palm tree. The gate in the middle of the hotel is located eight on the cardinal divide of the winter solstice at 0° Capricorn in such a way that the north half of the building is in Sagittarius and the south half in Capricorn. This cardinal degree marks the divide between two spheres so indicating the position of  a checkpoint at the gate to another world! The position of the gate is so exact here that it reminds of the precision site of the feng-shui architecture in Chinese and Japanese temples where the positions are determined through elaborate methods of geomancy and Feng Shui (compare: Fushima Inari Shrine in Kyoto). Spectacular examples of sculptures in the guardian position on the cardinal divide of the winter solstice are: Heaven`s Gate on the point of the winter solstice, The Guardian Fountains on Place de la Concorde, Golden Gate Bridge and the entrance into Capricorn on its south end, Fushima-Inari-Taisha and the gate at 0° Capricorn