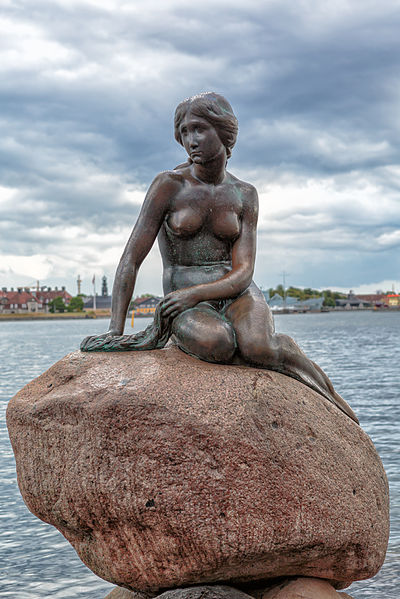 The “Little Mermaid” as a Guardian. Astrology, art, feng-shui and sculptures as guardians at the gate between different worlds.

The “Little Mermaid” as a guardian

The “Little Mermaid” at the entrance to the inner port in Copenhagen, Denmark is the official emblem of the city. It was created by the danish-icelandic sculptor Edvard Eriksen and unveiled on 23 August 1913. The motive is based on a theme from one of Hans Christian Andersen’s Fairy Tales.

Astrogeographic position of the Little mermaid sculpture for morphogenetic field level 4 (exact position) which describes the atmosphere and energetical topics of the statue itself: one coordinate is on the last degree (30°) of the fire sign Sagittarius which is the same as 0° Capricorn. This degree of the astrological zodiac stands for the cardinal divide of the winter solstice indicating that the sculpture has the function of a guardian or check-post between two different worlds here. In this case as a guardian at the entrance to the inner port of the City of Copenhagen. On the spiritual level 0° Capricorn symbolizes the gate between the material and the spiritual spheres or heaven and earth. In mythology this is the place where St. Michael with the sword or St. Peter as the guardian of heaven`s gate stand. For the energetical topics at the position of 0° Capricorn compare also:  Heaven`s Gate on the point of the winter solstice, The Bighorn Medicine Wheel  The Palm Jumeirah, The Guardian Fountains on Place de la Concorde, Golden Gate Bridge and the entrance into Capricorn on its south end, Fushima-Inari-Taisha and the gate at 0° Capricorn,  .

The 2nd aspect is in the air sign Gemini which stands for signposts, pathways, bridges, communication, interfaces, learning and bringing opposites together. Both aspects are valid for morphogenetic radius/field level 4 which describes the atmosphere of the exact location of the sculpture.

Mermaids combine the world of man with the world of the creatures of the ocean. This aspect of the sculpture is to be seen particularly in relation with the sign of Gemini here. The Mermaid reminds the humans of their relationship with the sea and its inhabitants here. And at the same time it could remind the spirits that come into the city from the open sea that all beings are or at least can be related and that their relation can bring about pure beauty and also suffering. This aspect of reciprocity and bipolarity and of being in a position to make contacts in both directions is archetypal of the sign of Gemini.The mermaid may not seem strong and frightening like the lions, dragons or other dangerous beings that are more frequently used as guardians.

Her effect as a guardian does not come from a gesture of threatening but from reminding us of beauty, compassion, sensitivity, love and personal suffering.

The Sunrise Chart for the day of the revelation and initiation of the “Little Mermaid” sculpture shows an impressive conjunction of Saturn and Mars in one of the two astrogeographical coordinates of the place: in Gemini. This constellation stands for warfare, soldiers, readiness for defense and also for confronting, fighting and “excorcising” “demons” in the form of unconscious, unrecognized, neglected, misunderstood, suppressed emotions and other issues, energies, desires and even spiritual entities.

Astrogeographic position for morphogenetic field level 4: the astrogeographic position of the statue falls in service orientated air sign Libra the sign of openness, gates, angels, harmony, peace, balance, love, relationship, romance, beauty and decoration indicating the function of the statue as to welcome the ships and spirits entering the harbor. The second coordinate is not on the cardinal divide between Sagittarius and Capricorn in the position of a guardian but in the center of fire sign Sagittarius. A key to understanding the role of Sagittarius here would be the sign`s qualities as an indication of the focus on style, design, fashion, ornaments, travelling, observing, thinking, understanding, lookouts, caricature and watching the ships go by.

The fact that the 2 decorative signs are combined could lead to the conclusion that unlike the Little Mermaid in Copenhagen the actual meaning and function of the sculpture at this particular site is of a decorative purpose and function without a deeper implication in regard to the geomantical analysis or feng-shui of the harbor area.

More examples for the cardinal divide of 0°Capricorn

The Arc de Triomf in Barcelona is another example for an object of art in the cardinal position of the first degree of the earth sign Capricorn indicating a check-post at the entrance to another world. The position is next to the end of Sagittarius the sign of triumph & victory and of arches. When passing the Arch it either marks an entrance to the world of triumph (Sagittarius N-W) when you are moving to the northwestern side or a world of enduring hardship (Capricorn S-E) if you are heading southeast. The 2nd coordinate is in the defensive water sign Scorpio indicating a fortress character of the building. Both are valid for the morphogenetical field level 4 which describes the building itself:

The statue of Emperor Augustus founder of the City of Augsburg in 14 A.D. is located right in front of the town hall and on the degree of the
winter solstice at 0°Capricorn the point of rulership & government. The fountain was inaugurated in 1594.

Astrogeographical position for morphogenetic field level 4 (exact position) which describes the energetical topics and atmosphere of the statue itself: the statue is located at 30°Sagittarius/0°Capricorn on the cardinal divide of the winter solstice the position of a checkpost between desire and reality, theory and practice, mental & spiritual plane. The 2nd coordinate is located in creative, innovative air sign Aquarius sign of the sky, heaven, paradise, self-finding, innovation and revolution,

Compare the Sabian symbol for 0°Capricorn: “An Indian Chief Claims Power from the Assembled Tribe” for the gesture of rulership which is to pyical for the resonance of the 0°Capricorn position with the king, prime minister, chieftain or ruler of a country.