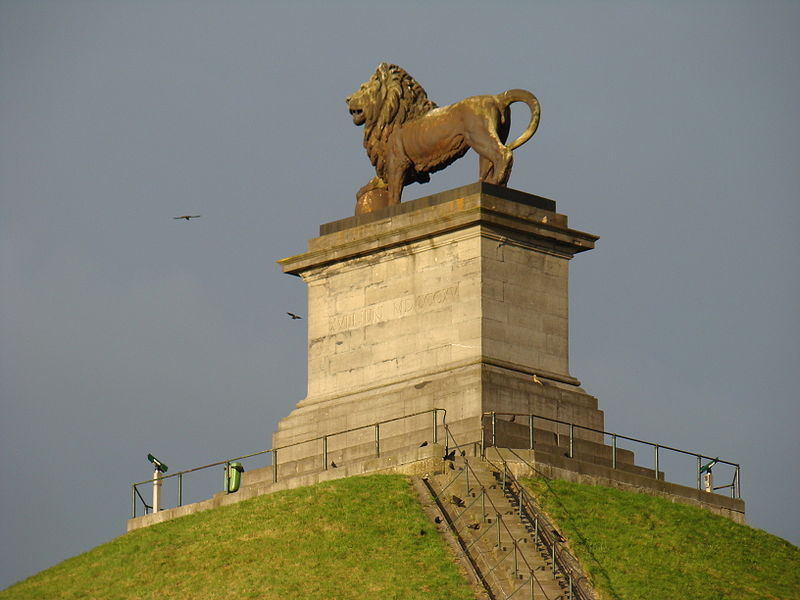 The Waterloo Lion as a Guardian. Astrology, sculptures and feng-shui: the position of the lion sculpture on the Battlefield of Waterloo.

Related articles: The “Little Mermaid” as a Guardian, Lion Sculptures in astrogeography, The Merlion in Singapur as a guardian, Teufelstisch – a guardian on the divide between two worlds, Neptune as the Guardian of a Town Hall, Senigallia Penelope Statue as a Guardian, The Waterloo Lion as a Guardian, Neptune as a Guardian,  Christ of the Abyss – guarding a gate to the  underworld, The Guardian Fountains on Place de la Concorde, Heaven`s Gate on the degree of the winter solstice. The capital of the European Union in Brussels, Hill of Tara at 0°Capricorn,

The Waterloo Lion as a Guardian

The Waterloo Lion is a Dutch Memorial to the Victory in the Battle of Waterloo.

It was erected on the Lion’s Mound a large (170 m diameter) conical artificial hill built on the battlefield of Waterloo in 1826, Belgium to commemorate the location where William II. of the Netherlands (born 6 Dec 1792, 8:00, Den Haag) was knocked from his horse by a musket ball to the shoulder on 18 June 1815. The site is located no more than 18 km to the south of the City of Brussels.

A victory sculpture depicting a lion that controls a globe was placed on top of the victory mound facing directly south in the direction where Napoleons troops were gathered during the Battle of Waterloo but not towards the position of the French capital of Paris. The sculptured lion is a copy of the Medici Lions in the City of Florence.

The astrogeographical qualities of the site suggest that the statue is more than a mere ornament or memorial of victory: its function also appears to be one of a guardian sculpture due to the position right on the cardinal divide of the winter solstice at 0°Capricorn.

Apart from the precise resonance with the political centers sculpture so has the important function of reminding the spirits of the fallen soldiers that their path and battle has ended. The astrogeographic position is so exact that geomantic consultation, spiritual advice or guidance during the process of election of the site is highly probable. Or else architect Charles Vander Straeten must have worked really precisely and with an intense use of knowledge and insight during the realization of the project.

The second coordinate falls on the first degree of creative, innovative, spiritual air sign Aquarius sign of the sky, heaven, paradise, abstraction, the stratosphere, the categories of archangels and cherubim and indicator for the re-connection with the fullest of human potentials and with the spiritual plane. The position in Aquarius is symptomatic of artificial mounds. Important exampled for artificial mounds in Aquarius are Silbury Hill near Avebury, the top of Knockarena Mountain and the artificial island Palm Jumeirah.