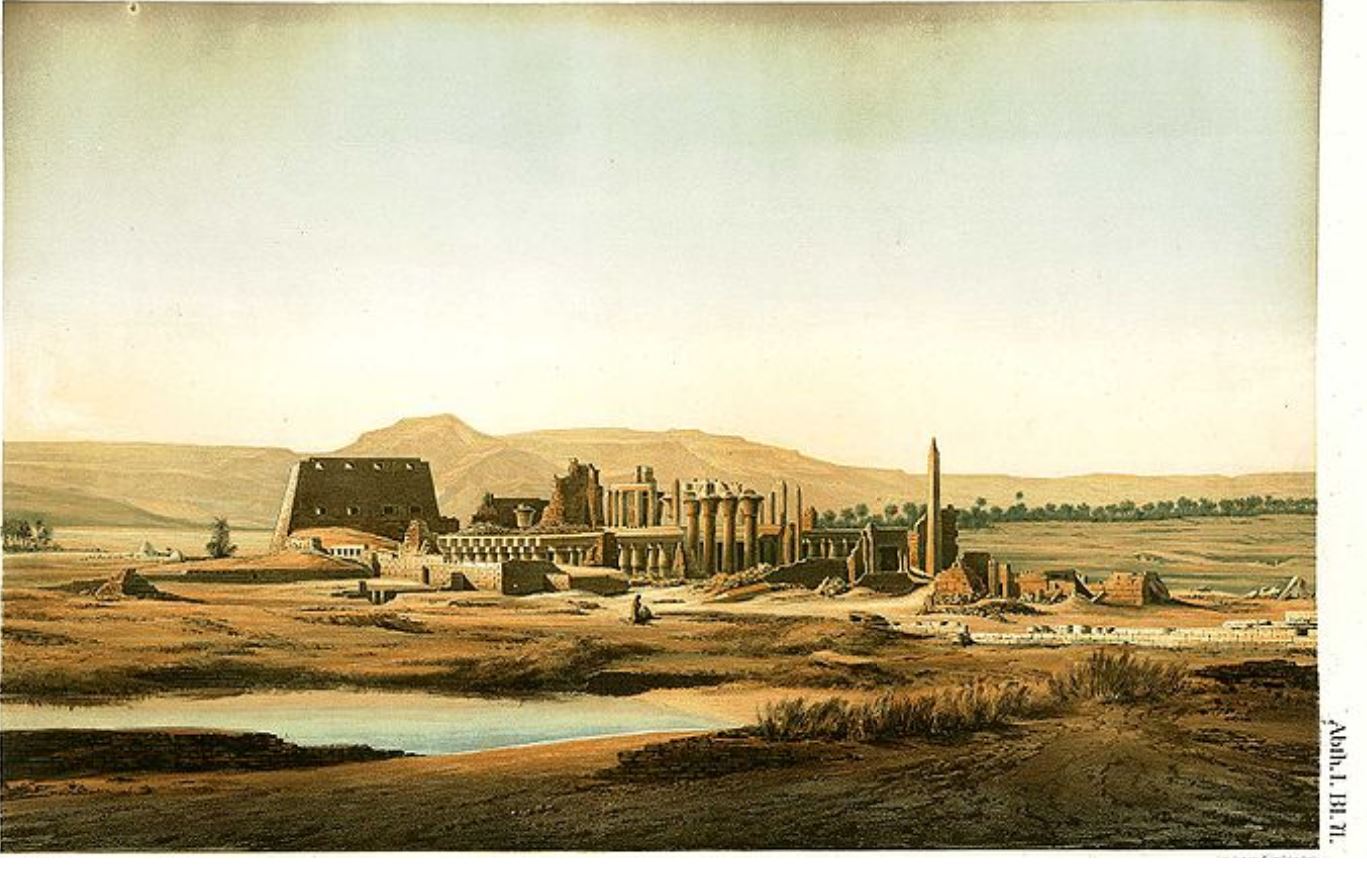 Related articles: The Temple of Hathor at Dendera, Valley of the Kings. Gemini and Virgo: the Great Pyramid of Giza, Vatican City, The astrogeographical position of Cairo, Aquarius and Leo – The Capital of the Sun God Aten, Capricorn and Taurus – The Lighthouse of Alexandria, Forbidden City, Meenakshi Amman Temple, Pashupatinath Temple in Kathmandu,

For a detailed visualization of the Temple in 1230 BC see the Steven Biesty illustration published in 2005 CE.

The Karnak Temple at the City of Thebes was a large and important temple site located appr. 800 km south of the Mediterranean. It was dedicated to the god Amun and his wife Amaunet and later to the Theban Triad of Amun Ra, the mother goddess Mut and their son Khonsu.

Construction of the Karnak Temple complex at Thebes was begun around 2000 BC – a century after Thebes had first become the capital of Egypt in 2135 BC. (beginning of Middle Kingdom). At the beginning of the Eighteenth or Thutmosid Dynasty (1550-1290 BC) in the New Kingdom of Egypt Karnak became the seat of the High Priests of Amun and the heart of the Egyptian state cult. During that era the High Priests of Thebes became so powerful and rich that they challenged the role of the Pharaos.

The construction of more temples and buildings in the vast temple area continued into the Ptolemaic Kingdom (305–30 BCE). The most of the extant buildings date from the New Kingdom.

Originally the god Amun represented a god of fertility and the wind. After the 16th century the collaboration and competition between the ruling priest kings (pharaos) and the powerful priest castes led to an official state policy that combined Amun with the sun god Ra making Amun-Ra  the king of the gods and the national deity of Egyptian state cult. He so combined the sun god Ra with the wind god and the god of fertility.

Thebes as the capital of the Nile Flood

The astrogeographical latitude coordinates of the 2200 km long White and Main Nile Valley are stretched between the 2 major signs of flooding: Aquarius the sign of the rainy season reflecting the long distance transport of the waters and Pisces reflecting a region that depends on flooding and the presence of the super delta.

At Luxor the position on the first degrees of Pisces is joined by a 2nd water sign through the astrogeographical latitude coordinate of the Luxor region in Cancer the sign of rivers, water sources, coast lines, fertility, conception and pregnancy. Whereas Pisces resonates with the abstract unlimited aspects of water Cancer stands for the assimilation of water for the purposes of reproduction and internal life of living beings.

This sign combination reflects the energetical resonance of the larger region around Luxor with the topics of living waters.

The following list of the astrogeographical resonance positions of the capitals of Egypt over the last 5000 years strongly reflects the importance of the yearly Nile flood as the central condition of the Egyptian Empire. This is because the astrogeographical longitude coordinate (Coordinate 1) of the Nil valley stretches between air sign Aquarius the sign of the water bearer, rains and storms and Pisces the sign of flooding, drowning and the ocean.

The City of Thebes has both astrogeographical resonance coordinates in water signs.

Astrogeographical position of Thebes for morphogenetic field level 1 (region) which describes the supra-regional and role of the City of Thebes for the whole of Egypt: the area of Thebes has one coordinate at 2° in spiritual water spiritual sign Pisces a degree particularly known for its resonance with flooding and dam breaking. Pisces stands for the supremacy of water over solid ground and of spirituality over material concerns.

The 2nd coordinate is at 13° in emotional water sign Cancer the sign of the moon, rivers, water sources, fertility, conception, pregnancy, motherhood, feeling at home, emotional individuality and identity and of ancestor lines.

Astrogeographic position for mophogenetic field level 3 which describes how the temple was embedded in the landscape of the area of the residential city of the Pharaos: The shrine of Amun Ra in the temple complex at Karnak was built in the constellation of the two earth signs Capricorn and Taurus.

The astrogeographic coordinate in Taurus the sign of agriculture, food, weeds and cereals, profitability, market places, income, local energetical centers, the center of society, conquest, occupation and possession of territory indicates the occupation of highly valuable agricultural land by the temple. Taurus` role as the sign of agriculture relates to the strong resonance of the central temple with its function as a place of worship for the annual fertility rites dedicated at securing a rich Nile flood.

The choice of a construction site in solid, traditionalist, conservative, exclusive and highly defensive Capricorn the sign of governments, laws, control, regulations is an indication of the fortress character of the building and the importance of high walls around. As the astrological resonator of hardest rock Capricorn secured the stability and durability of the temple building itself – which was built close to the Nile river but for eternity. Apart from the stability of the building and its fortress character Capricorns resonance as the sign of laws, regulations, control, government institutions and administration also stands for the important political role of the Karnak Temple as the central seat of the high priests of Egyptian state god Amun-Re.

For more examples of important temples in Capricorn dedicated to the state cult function compare my articles on the astrogeographical positions of Vatican City, Forbidden City, Meenakshi Amman Temple and Washington National Cathedral

For the combination of Capricorn with Taurus for temples for the government`s annual fertility or prosperity rites compare the examples of Tian Tan Tempel in Beijing and Pashupatinath Temple in Katmandu.

A fascinating parallel for an ancient Egyptian building that was located in Capricorn with Taurus is the Lighthouse of Alexandria dedicated at signalling the presence of save and solid ground to the ships at sea and to the population in the Nile delta too.

The Precinct of Mut

The Precinct of Mut located some 400 m south of the Karnak Temple marks a site of strategical contrast to the main temple precinct at Karnak. Surrounding the Mut Temple proper, on three sides, is a sacred lake called the Isheru.

Astrogeographical resonance coordinates of the Temple of Mut for morphogenetic field level 3 (surrounding area) which describes how the temple and precinct are embedded in the land: The site of the temple of Mut is not located inside of the the morphic field of the main temple area but right on its borders with their neighbor fields. This position may be examined as a hint at its function as a building dedicated at establishing a contrast and even a place of observation and reflection of the energetical situation at the main temple.

The temple site has one coordinate right on the cardinal divide of the winter solstice between fire sign Sagittarius and earth sign Capricorn marking a particular resonance with time measurement and the observation of seasons. It can therefore not be excluded that the site had a particular function for the determination of dates and seasons.

The 2nd coordinate coordinate of the temple is right on the divide between earth sign Taurus and air sign Gemini the sign of learning, schools, communication, roads, symbolism, language, writing and of contacts. This aspect may be examined as a hint at the function of the site for practical purposes, contacts and intelligence.

The Gods Amun, Ra and Amun-Ra

The god Amun and his female form Amaunet are testified since the times of the Old Kingdom (2686–2181 BC). Amun was originally seen as a god of fertility and of the wind. Whereas his function, image and role in official state cult changed over the millennia the worship of a stable image of Amun with a ram`s head (Aries) as a god of the herds, cattle grounds and their fertility by the population appears to have played an important role too.

With the beginning of the Middle Kingdom (from 2055 or 2040 to 1782 or 1650 BC.) a new policy of Egyptian unification was introduced aimed at ending the political division of the 1st Intermediate Period. By 2135 BC the capital was transferred from Het-Nesut /Heracleopolis Magna (22°Aries-14°Aquarius) to Thebes (13°Cancer-2°Pisces). Through this step Amun rose to the position of the patron deity of Thebes replacing the more ancient falcon headed god of war Montu whose main role continued to be the protection of the vitality of the Pharaos.

The Temple of Amun at Jebel Barkal

The Temple of Amun at Jebel Barkal in Northern State  of Sudan is situated about 400 kilometres north of Khartoum near Karima. The construction of the temple was started in the 13th century BC after the Egyptian conquest of the Kingdom of Kush with the purpose of establishing the Egyptian state religion in the new territories in order to claim the spiritual sovereignty. The choice of a site located in Capricorn with Aries the constellation of the warrior castes is a clear hint at this function of the temple as to stabilize Egypt`s military rule in the region.

Jebel Barkal a  very small, 98 m tall mountain with a flat top on the traders route between Central Africa , Arabia and Egypt was officially identified as the birth place of the egyptian state gof Amun.

Astrogeographic position for mophogenetic field level 3 which describes how the mountain of Jebel Barkal and the temple along with the settlement are embedded in the landscape: one of the  2 astrogeographical coordinates here lies in earth sign Capricorn the sign of stability, government institutions and indicator for the role of the temple as a site built for the Egyptian state god to consolidate the rule of Egypt over the newly conquered kingdom of Kush.  Capricorn represents a clear resonance of the site with the central northern temple of Amun in Karnak. The second coordinate of Jebel Barkal lies in dynamic male fire sign Aries sign of action, warfare, new starts, strongholds and the importance of the site as a military base.

The combination of Capricorn with Aries is archetypal for the warrior and soldier castes. The choice of a site in this astrogeographical combination for the site of this important temple