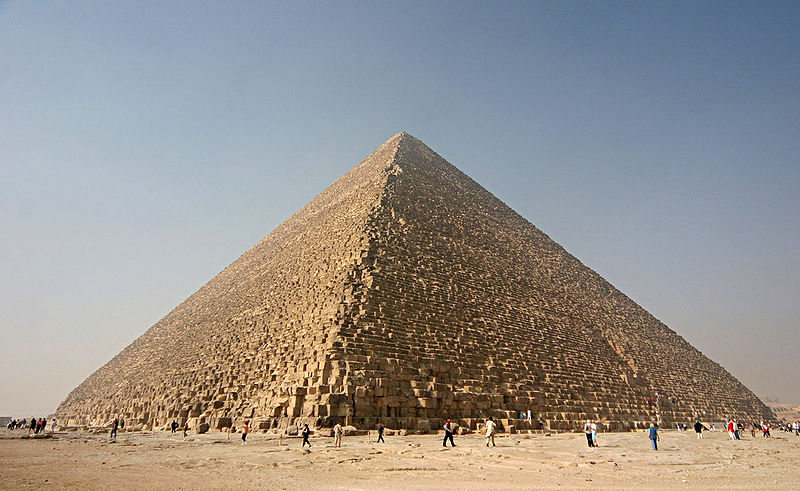 Related articles: The Pyramid of Kukulcán in Chichén Itzá, The Maya Ruins at Palenque in astrogeography, Templo Mayor in Mexico City,
Gemini and Virgo – Samye Gompa the oldest monastery in Tibet, Virgo and Gemini – The Greenpeace Headquarters in Amsterdam, Valley of the Kings

The Pyramids of Giza

Astrogeographical resonance coordinates for the pyramids of Giza for morphogenetic field level 3 (surrounding area) which describes the energetical topics and function of the pyramids: the coordinate for the astrogeographical longitude of all the pyramids is in earth sign Virgo. The latitude position has the two larger pyramids of Khufu and Khafre in the northern part of the area in Gemini while the smaller pyramid of Mykerinos in the south is located in Cancer. By astrological definition Virgo and Gemini are in a square to each other indicating an aspect of tension. But in the case of building of such enormously large proportions the square of the zodiac signs could possibly be considered a potentially harmonious and thereby stabilizing aspect for the building structure. Virgo may here, among other things refer to the aspect of caution from grave robbers and to an elaborate system of blockings of the pathways into the centre of the pyramid. Gemini as the sign of learning and trying out new technologies reflects the importance of the construction site as a place of training for all kinds of professions including construction workers, artists, architects and priests.
Virgo as the sign of strategical planning symbolizes the extensive requirements for the organizing of construction and art work. Seen from this aspect the choice of the site was rather made for expediency than for the purpose of building a mystical temple on a particularly sacred site. As the pyramid was meant to be the house of eternity for Pharao Khufu`s immortal soul the self-protective sign Virgo is to be seen as the aspect that symbolizes the protection and preservation of the Pharao`s mortal remains along with its spiritual aspects and also the royal dynasty here. Because Gemini (Air sign) is a challenging aspect to Virgo (Earth sign) this principle represents a factor that is challenging the durability of the building and also the safety precautions. This can be concluded also from the fact that Mercury the ruling planet of Gemini has been named after the roman god of thieves and trickery.

Gemini and Virgo: the Great Pyramid of Giza

The Great Pyramid or Pyramid of Khufu with a height of 138.75 meters (formerly 146.59) is the highest and oldest of the three pyramids at Giza. The side length is 230.33 m. The completion of its construction is dated for the year 2580 BC.. It was built as a tomb for the Pharaoh Khufu as a part of the Giza Necropolis forming a group together with the later built pyramids of the pharaohs Khafre and Menkaure.

The Pyramid of Khafre

The Pyramid of Khafre or of Chephren is the second-largest of the Ancient Egyptian Pyramids of Giza and the tomb of the Fourth-Dynasty pharaoh Khafre (Chefren), who ruled from c. 2558 to 2532 BC.

Astrogeographical position of the center of the pyramid of Khafre for morphogenetic radius/field level 4 (exact position) which describes the energetical topics of the center of the pyramid: the pyramid of Khafre is located in the same combination of signs as the central temple of Amun-Re in Karnak (Luxor). The astrogeographical resonance coordinates are in the two earth signs Taurus and Capricorn indicating that the stabilization of the rule of the dynasty and the state cult are the central topics of the pyramid. The position in Taurus the sign of the earth, grounding, agriculture and food stands for the important central role of the pharao for the organisation of food production and agriculture. The resonance position in Capricorn stands for the topics of stability of the administration, dynasty,

The Pyramid of Menkaure

The Pyramid of Menkaure is the smallest and last of the three pyramids on the Giza Plateau with an original height of 65.5 meters. Menkaure was the son of Khafra and the grandson of Khufu. The pyramid is located at the south end of the morphogenetic field of the larger pyramids with the pyramid of Khufu in double Leo as its absolute center. As the pyramid of Menkaure overlaps into the next field to the south of the “Pyramid of Khufu field” its function appears to be of minor importance.

Astrogeographical position of the center of the pyramid of Menkaure for morphogenetic radius/field level 4 (exact position) which describes the energetical topics and function of the pyramid: the longitude coordinate stretches from mystic, spiritual water sin Pisces sign of dreaming, illusion and spirituality into dynamic, male fire sign Aries sign of action, speed, warfare, fighting and ignition. The 2nd coordinate is in air sign Gemini the sign of signposts, communication, road crossings and technology.

The bent pyramid is located in Capricorn with Aries resonating with the function of a memorial for a representative of the warrior caste built as a monument of stability of the state cult, traditions and the political system.

The Red Pyramid of Dashur