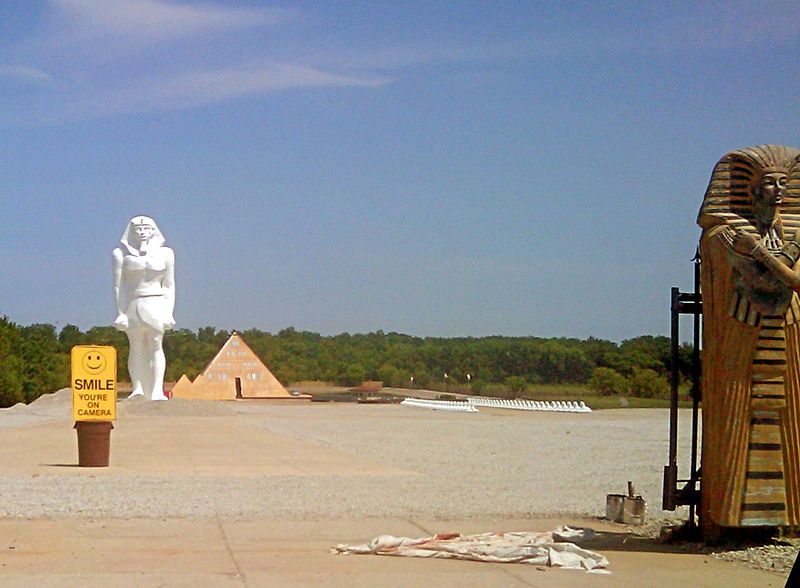 Related articles: Aquarius as the corresponding sign of Maya culture, The Great Pyramid of Cholula – Connecting Earth and Sky, Pyramid City of Túcume, Pyramid of Kukulcán in Chichén Itzá, Great Pyramid of Giza, Valley of the Kings,  The Temple of Borobudur, Templo Mayor in Mexico City, The Sacred City of Caral in the Supe Valley in Peru.

The 24 carat gold plated six storey Gold Pyramid House was built  in 1977 by Jim & Linda Onan as a private residence in Wadsworth, Illinois. It features a statue of Ramses II and a three pyramid garage, surrounded by a moat.

0°Aquarius/30°Capricorn is the topic of grounding the sky

The form of Pyramids can be understood to be meant to receive, capture, channel, ground and distribute cosmic energies onto the earth and into the ground. Therefore the position of a pyramid at 0°Aquarius may seem to be to some extent congruent with the function suggested by its form if not ideal for its energetical purposes. My astrogeographical research has shown that Aquarius is a frequent and highly typical factor at the sites of Mayan pyramids. Compare my article: Aquarius as the corresponding sign of Maya culture. Other important astrogeographical factors in pyramids appear are the Mercury signs Virgo and Gemini especially in Egypt.

Astrogeographic position of the Gold Pyramid House for morphogenetic field level 3 which describes how the construction site is embedded in the county and surrounding area where it lies: the midpoint of the pyramid house lies right in between solid, conservative, strict, formalist earth sign Capricorn sign of mountains, history, control, government institutions, state cult and creative, innovative air sign Aquarius sign of the sky, heaven, paradise, self-finding, inspiration, extravagance, contrasts, abstraction, experiments and reconnection with the fuller potentials of humans. The 2nd coordinate of the construction site is in Aquarius too.

The position right in between Capricorn and Aquarius at 30° Capricorn stands for the meeting point of highest place on top of the highest mountain (Capricorn) with the sky (Aquarius).

The 98 m tall “Memphis Pyramid” in Memphis, Tennessee was originally built as a concert hall and sports arena and first opened on Nov, 9 1991.

Astrogeographic position of the construction site of the Memphis pyramid for morphogenetic field level 3 (surrounding area): both coordinates are located exactly on cardinal, energetical divides. One in between fire sign Sagittarius & earth sign Capricorn the point of the winter solstice and indicator of the position of governments, check-posts and tribal gathering sites.

The 2nd coordinate is on the degree of the autumn equinox between earth sign Virgo & air sign Libra (weather divides).