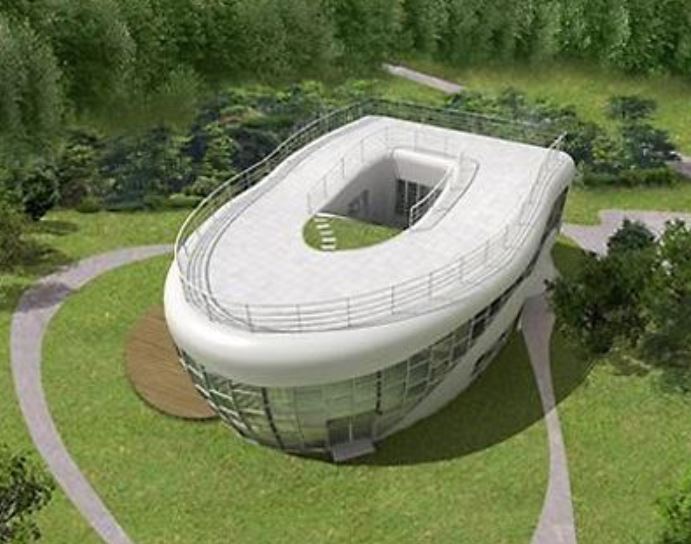 The Toilet House between the signs of control & release, Astrology, architecture & art: the astrogeographical position of the Toilet House in South Korea.

Compare: Distortion as an element of style in Aquarius,

The Toilet House is an architectural sculpture in the City of Suweon, Korea. The chairman of the World Toilet Association, Sim Jae-Duck, built this house in the shape of a toilet. The astrogeographical positions of the site of the house can be read as a definition of important aspects of toilets.

One of the two coordinates of the Toilet House is located right in between Capricorn the sign of control, muscular blocks, impediments and self responsibility and Aquarius sign of release. Aquarius and especially its ruler Uranus are known to have a particular relationship to releasing air stuck in the intestines and held back by muscular blocks along the spinal column. The defensive, exclusive fortress character of Capricorn stands for the aspect of toilets as places where we separate ourselves from others, lock ourselves in and have exclusive reponsibility of what happens inside that space. Aquarius as the sign of inspiration stands for the potential of toilets as sites where when releasing old energies the path for new ideas and inspiration can be regained. The position in Aquarius as the sign of the water bearer is also highly interesting here in regard to the water containers installed above or behind toilets from where the flushing waters can be released.

Astrogeographic position for field level 4 which describes the atmosphere of the house itself: the midpoint is located right in between solid earth sign Capricorn sign of control, public institutions and the white colour of the roof and facade and creative, innovative air sign Aquarius sign of releasing tension, farting, self-liberation, self-finding, heaven, the nervous system and paradise.
The 2nd coordinate is in highly imaginative, relaxed water sign Pisces sign of self-cleansing, letting go, flushing, dreaming, temples, hiding, the true self, holidays and recreation.

The site of the toilet house is not located in Scorpio the sign of feeces and main indicator for the smell of feeces and also not in Virgo the sign hygiene, washing, cleanness, the intestinal tract, digestion and of sensitivity in regard to smells. In fact The position of the house rather indicates that it was built to concentrate on the more abstract and so to say “positive” aspects of toilets.

As can be understood easily from the above list Pisces is very interesting for the site of a toilet in many ways. Pisces definitely supports relaxing and letting go and being or feeling unwatched. And Pisces supports reconnection with aspects of ourselves which we normally hide from others.