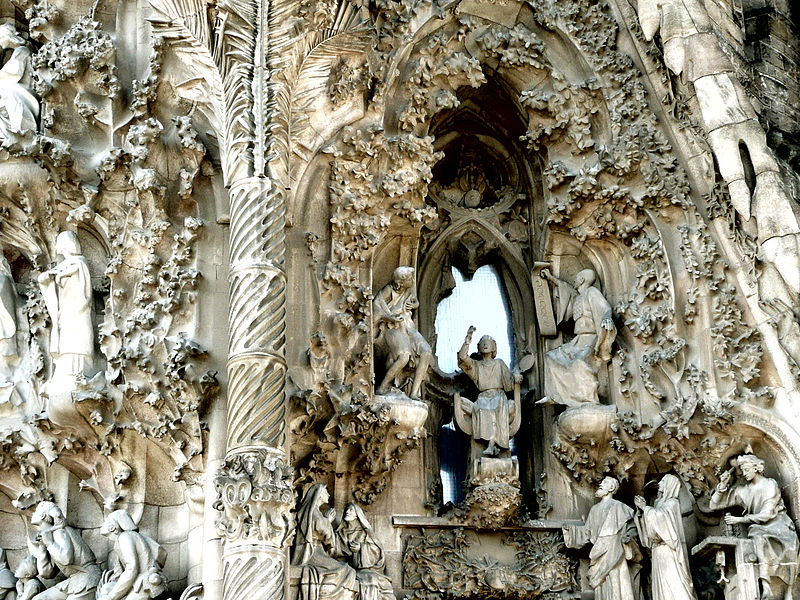 Gaudi`s Sagrada Familia in Astrology and Astrogeography. Architecture and magical places: the magic of the Antoni Gaudi cathedral in Barcelona

Related articles: Cancer as the Sign of Seashells in Architecture, Libra and Virgo – The Church of Saint Francis in Assissi, Libra and Leo – The Sanctuary of Fátima, Libra -Aquarius: The church of Saint Faith in Conques,

The Basilica and Expiatory Church of the Holy Family (Catalan: Temple de la Sagrada Família Expiatori) in Barcelona probably is the most elaborate church in the period of modernity. And a new climax in the history of architecture-

The foundation stone for the first part of the cathedral designed by architect Francesc de Paula del Villar was laid on 19/3/1882. A year later Antoni Gaudi was entrusted with the project and created a completely revised design for the cathedral with 18 towers. The overall dimensions and the rich details of the design are so overwhelmingly great that the construction works are still unfinished and the building is currently planned to be completed for the 100th anniversary of Gaudi`s death in 2026.

Astrogeographic position of the Sagrada Familia for morphogenetic field level 3 which describes the atmosphere and energetical topics of the site of the church itself and how it is embedded in the City of Barcelona: the Sagrada Familia temple is located in the combination of earth sign Virgo sign of reason, health, organic architecture, healing, medicine, celibacy, monk-hood, yoga culture, self-protection, conservation and optimal use if resources with service orientated air sign Libra the sign of angels, harmony, balance, beauty, justice, decoration, relationship, marriage, naive paintings, the ideal of a higher and aristocratic culture and its presentation on a stage.

Virgo the sign of reason and rationality does not stand for the spiritual or mystical aspects of places or buildings in the first place but rather for aspects of economical and practical considerations. This is because Virgo represents the straight opposite sign of Pisces the sign of traditional catholic mysticism, re-connection with the spiritual plane, feeling at home in the dream world of mystic, spiritual or catholic traditions, beliefs, superstitions and also the spiritual communion beyond all limits. And Pisces represents the traditional sign of the catholic religion and church so that the position in Virgo could rather relate to a less colorful and more rational form of christian religion as in the protestant church. But Virgo has

.For the sites of temples and churches cancer

The astrogeographical position in Libra emphasizes the importance of beautify the place and building and present the church could serve to explain the extensive efforts made to design and decorate the building according to a higher ideal of beauty. Fascinating examples of this aspect with buildings and espacially for the decoration with slim tower in Libra are the temples of Angkor Wat in Cambodia and Shwedagon Pagoda in Myanmar.

Really important examples for temples located in Virgo are the important Tibetan Buddhist temples Jokhang (Virgo-Cancer) and Samye Gompa /Virgo-Gemini), the monastery of Taize and the Rumi memorial which represent examples for Virgo`s affinity with monk and yoga culture.  Another symptomatic type of temples in Virgo are places dedicated to mummification and all kinds of pyramid temples: Great Pyramid of Giza, Chichén Itzá,

A really remarkable catholic church in the combination of Libra with Virgo is the Church of Saint Francis in Assissi.

Astrogeographical position of the Sagrada Familia for morphogenetic field level 4 which describes the atmosphere and energetical topics of the building itself: both coordinates valid for the center of the church are located  in  emotional water sign Cancer, sign of the moon, fertility, pregnancy, conception, motherhood, the uterus, family life, emotional individuality, pain and independence. This correspondence is relevant in regard to the name “Expiatory Church of the Holy Family”. Basically Cancer is the main astrological correspondence for the motive of family life. Cancer as the capacity to feel, stands for the ability of the individual to identify itself personally and subjectively and develop her or his interior identity.

This is why Cancer as the central and most important astrological principle of modernity also points to one of its main issues: the suffering and the transformation of pain. The concept of “atonement” when appearing at a place in the sign of Cancer is to be considered as a call for authenticity particularly when the performing artist like in the case of Gaudi has been born with the Sun in this sign.

Antoni Gaudi was born on 25/Jun/1852 at 9:30 in Reus, Spain with the Sun in Cancer and the Ascendant in Virgo. In his birth chart Virgo occupies the first house, pointing out that the site could have supported him in feeling himself seen and understood and so stands for the recognition of his work as well as his personal needs.

Libra occupies the 2nd house in Gaudis birth chart indicating that he might have felt really grounded here, considering the construction site of the Sagrada Familia to be his own territory. In this sense Gaudi`s relation with the site as an architect can be understood as one of land tenure although this does not include the motif of house 4 with the topic of an emotional home nor one of house 5 which would stand for a playground of one`s own imagination and needs. The whole constellation can be evaluated to be highly favorable for Gaudi, personally as well as professionally and even financially.

The aspect of Cancer occupying the 11th house in Gaudi`s birth chart could mean that working on the project of the Sagrada Familia was like a spiritual path of self liberation and self realization. It is regarded as a biographical fact by his biographers that during the process of working on the Sagrada Familia Gaudi turned himself more and more to austerity and celibacy. Until today seven of Gaudi`s works have been declared World Heritage Sites by UNESCO.