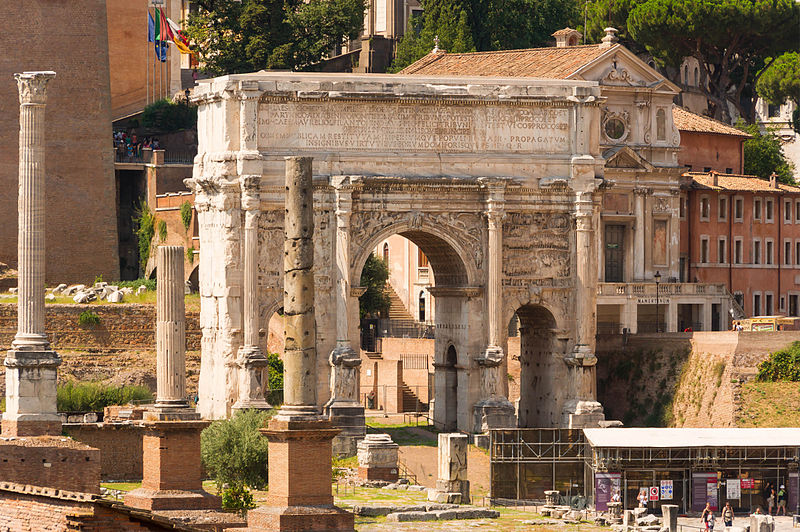 Forum Romanum – The heart of the Roman Empire. Capitoline Hill and Forum Romanum in astrology and astrogeography

Forum Romanum – The heart of the Roman Empire

Placed at the foot of Capitoline Hill the central plaza of Rome the Forum Roman was the heart and center of the ancient City of Rome and the whole of the Roman Empire.

Astrogeographic position of Capitoline Hill and Forum Romanum the heart and center of the ancient City of Rome for morphogenetic field level 3 which describes the atmosphere, energetical topics and how the site is embedded in the city of Rome:  the coordinate for the astrogeographical longitude position of the whole larger area that includes Capitoline Hill and Forum Romanum to the east at the foot of Capitoline Hill lies in mystic, spiritual water sign Pisces. Pisces represents  the sign of imagination, the dream world, mystification, illusion, temples, italian culture and within cities an important indicator for open spaces dedicated to recreation.  Pisces is the indicator for the role of the area of Capitoline Hill and Forum Romanum as an important site of temples, baths and and buildings dedicated to the mystification and glorification of Rome and its emperors.  For this role of Pisces compare: Temple Mount, Lincoln Memorial, Mount Olympus, Glastonbury Abbey.

The coordinate for the astrogeographical latitude falls in highly defensive, conservative, traditionalistic, strict earth sign Capricorn the sign of fortresses, control, government institutions, rules and regulations, public space and indicator for the prominent role of the forum to serve representative functions and as the center of government institutions. Apart from that Capricornas the sign of mountains and rocks is the indicator for the hill on which the central  government buildings were erected.

According to Roman tradition Romulus founded the city of Rome on the Palatine Hill located 300 m to the south of Capitoline Hill on April 21st, 753 BCE.  The area of Palatine Hill has the astrogeographical latiutude coordinate in air sign Aquarius and the coordinate for the astrogeographical longitude lies in the same sign as Capitoline Hill: water sign Pisces.

Originally the name of Capitoline Hill was Saturnus Mons or Mount of Saturn. Saturn originally represented a god  of agriculture.

Saturnus Mons was the home and possibly the original site (birth place) of the roman agricultural god Saturn although it remains unclear whether or not the Etruscan god of a similar name but different qualities under the name of Satre – often interpreted as the equivalent of Saturn had preceded Saturn.

When  a central temple for the official state religion of Rome was consecrated in 509 BC  under the name of Temple of Jupiter Optimus Maximus. Jupiter Capitollinus took over Saturn`s position and was made the official state god of  Rome.

When Saturnus Mons was turned into Capitoline Hill the place became the official center of the roman state cult and main temple of the Roman Empire.

Later the temple was consecrated to the Capitolline Triad of Jupiter, Juno and Minerva. The 3 gods of this trinity did not represented a direct correspondence with the astrogeographical resonating signs of the area (Capricorn & Pisces) in the first place.

The combination of Pisces and Capricorn does not indicate the topics of a town center or even a market place (Taurus), as in the case of the Temple Mount in Jerusalem (Pisces and Taurus). Capricorn the sign of mountains and of defense is the indicator for the hill as the center of the government area, for the government  itself,  for the position of the ancient city fortress called Arx, that was situated on Capitoline Hill before it was transformed into the central temple mount and of course for original name of Capitoline Hill: Saturnus Mons.

Today the church Santa Maria in Aracoeli (Holy Mary of the Altar of Heaven) occupies the place of the former city fortress called Arx. Pisces the sign of the unconscious, the invisible and spiritual plane, hints at the character of the construction site as an urban open space which is energetically independent from the busy environment of the city.  Apart from that Pisces as the most important astrological significator for Italian culture and the catholic church is also the indicator here for the central role of Capitoline Hill and Forum Romanum as the center of the most successful empire in Italian history.

The astrogeographical positions of the Forum Romanum area in Pisces with Capricorn do not resonate with the topics of a central market place or shopping area as in rural town centers in the first place. And as the empire expanded the Forum Romaum rather turned into an agglomeration of monuments, temples, baths and all kinds of buildings dedicated to the mystification and glorification of Rome and its emperors.

But it still also had all the luxury of the world`s first class international markets as for example Trajan`s Market the “world`s first shopping mall” as a large indoor market with colonnades over a hundred metres long built between 100-110 AD by the architect Apollodorus of Damascus. It also included a library.

Astrogeographic position of Trajan`s Market for morphogenetic field level 4 which describes the atmosphere of the market building itself: the building lies in practical air sign Gemini sign of information, communication, curiosity, technology, going new ways, language, bringing opposites together, the ideal of a liberal society and a clearest indicator for the openness to multicultural aspects. Highly defensive, solid water sign Scorpio the sign of fortresses stands for the idea of a market inside the shelter of a building. The militia tower above the semi-circled building added  in 1200 AD when the building was turned into a fortress is a visible element of Scorpio.

The Carcus Tullianus or Mamertine Prison was a central prison on Forum Romanum where Vercingetorix, Jugurtha, St. Peter, St. Paul and other famous and legendary prisoners  were kept.

Astrogeographic position of the Mamertine Prison for morphogenetic field level 4 which describes the atmosphere and energetical topics of the building itself: the two coordinates of the site are located in the two fixed signs Taurus and Aquarius which form a square and aspect of tension with each other. Earth sign Taurus the sign of the earth, grounding, growing roots, conquering territory confronts with air sign Aquarius the sign of the sky, heaven, rebellion, self-liberation and self-finding.

The Baths of Trajan dedicated during the Kalends of July in 109 and built under Emperor Trajan though not on Forum Romanum but to the east of it are located “on the outskirts” of the the morphogenetic field of the Forum and Capitoline Hill.

The small temple of Venus Cloacina was one of the oldest temples was built to honor the divinity of the Cloaca Maxima, the spirit of the “Great Drain” which was built to drain the area south of Forum Romanum.

Astrogeographic position of the Venus Cloacina temple for morphogenetic field level 4 which describes the atmosphere and energetical topics of the small building itself: one coordinate lies in mystic spiritual water sign Pisces sign of the abstract aspects of the water element, the unknown, invisible, dream world, legends, mystification and most important indicator for temples. The second coordinate lies in practical air sign Gemini sign of technology, signposts, pathways, roads, bridges, communication, intelligence and learning, Gemini stands for a place of resonance with the supra-regional coordinates of Rome in Gemini (for field level 1) which stand for the technological achievements of roman culture.

Astrogeographic position of the Arch of Septimus Severus for morphogenetic field level 4 which describes the atmosphere and energetical topics of the arch and surrounding sculptures including the Temple of Saturn: one coordinate lies in solid, fixed earth sign Taurus sign of the earth, grounding, conquering territory, possession of land, wealth, money and  agriculture. 2nd coordinate lies in spiritual water sign Pisces, sign of temples, mystification, legends, fairy-tales, illusions.

The House of Vestal Vrigins was the residence of the Vestal Virgins the priestesses of the important 7th century Temple of Vesta. On the North side of it stood the Domus Publicae seat of the Pontifex Maximus (Latin, literally: “greatest pontiff” or “greatest bridge-builder”) was the high priest of the College of Pontiffs

Astrogeographic position of the House of the Vestal Virgins for morphogenetic field level 4 which describes the atmosphere and energetical topics of the house itself: one coordinate was located in female emotional water sign Cancer sign of the moon, motherhood, fertility, the uterus, emotional individuality and modernity. The second coordinate fell in solid fixed earth sign Taurus sign of the earth, stability, wealth and agriculture. The nearby Temple of Vesta site of the eternal flame to the north-west of the House where the vestal priestesses lived was located in fire sign Aries sign of ignition, new flames, mobilization, action, with practical air sign Gemini sign of signposts, information, schools, learning.

Except for the Temple of Saturn which was the first temple on Forum Romanum the resonance coordinates of the temples here can hardly be taken as symptomatic of the gods worshiped in them. This is because there are simply too many different temples for the whole range of gods in the here, making the Forum Romanum a gathering site for the gods of the empire.  The most important gods represented by a temple of their own here are: Saturn, Vesta, Venus Cloacina, Janus, Vulcan, Umbilicus Urbis, Concordia, Castor and Pollux, Dei Consentes, Julius Caesar, Antonius Pius, Faustina.

The Temple of Saturn

The Temple of Saturn was where the Empire`s treasures and  its reserves of gold and silver were kept together with the state archives, the insignia, written laws and the official scale for the weighing of metals.

All these functions of the temple of Saturn directly correspond with the topics assigned to Saturn in astrology. This strongest imaginable visibility of the resonance of Saturn at a place is astrogeographically reflected in the position of the site in Capricorn the sign  of Saturn`s rulership: Saturn as the ruler of Capricorn resided in his own sign and territory here.  No other astrological sign can be imagined which would be more symptomatic and auspicious for these purposes than defensive,  conservative, traditionalist, strict,  hierarchical earth sign Capricorn the sign of control and most important indicator for all aspects of government institutions.

The Temple of Saturn was the central site for the festival of the Saturnalia. The Saturnalia was a yearly festival celebrated for several days around the winter solstice starting from 17 December of each year. Astrologically it falls in the period of the Sun`s transit from the last degrees of Sagittarius into Capricorn. For the northern hemisphere the winter solstice on 22°December  marks the time of the year when the period of decreasing daylight and shortening days ends and the days start getting longer. During the Saturnalia the confrontation of Sagittarius (maximal darkness) and Capricorn (minimal daylight) was celebrated as the victory of the Sol Invictus or undefeated sun.