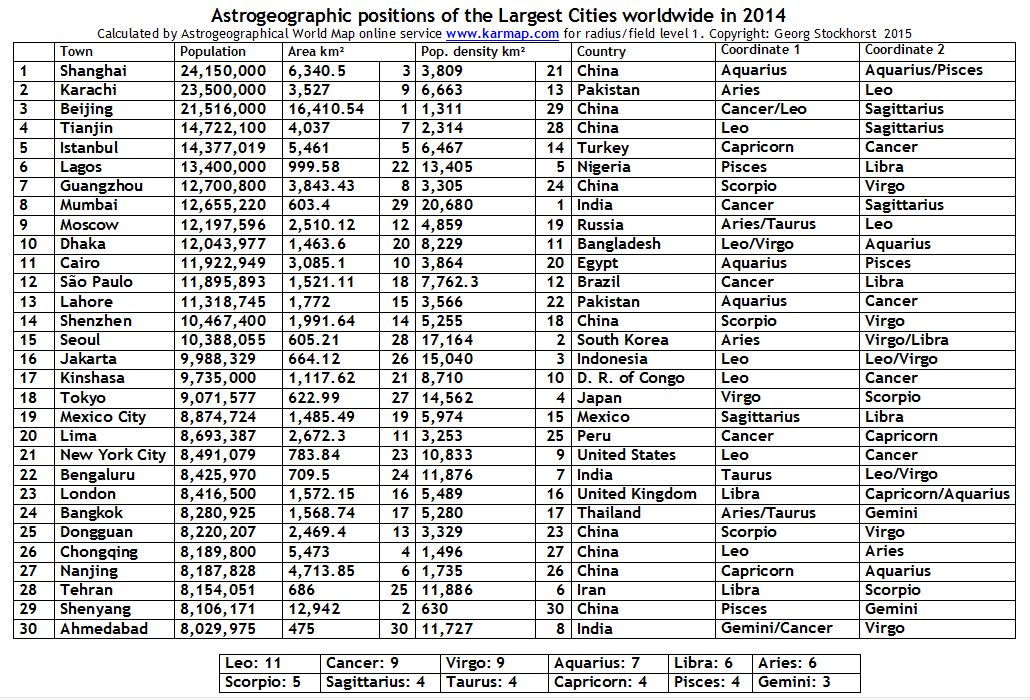 Astrogeographical positions of the largest cities worldwide. On the astrology and astrogeography of large urban centers.

The table of the largest cities worldwide in 2014 and their astrogeographical positions is calculated for morphogenetic radius/field level 1 which describes the supra-regional significance of the cities. Data source for data about the number of inhabitants, area and population  density is from the english wikipedia article: “List of cities proper by population”.

Yesterday I published a short article on the list of the largest cities worldwide in the 1st century AD.  Today I`m presenting a table of the astrogeographic positions of the largest urban agglomerations worldwide in 2014.  For a deeper astrological analysis of the data I recommend to take some time for comparison of the two.

The historical lists provide some hints at the archetypal astrogeographic constellations for particular types of mega cities which rare reflected by similar positions in the list for today.

Cancer and Virgo were the leaders of the list of largest cities worldwide in the year 100 AD and  2000 years later still take places 1 and 3. Cancer`s role as the “mother-sign of urbanization” can be explained through Cancer`s qualities as the sign of rivers, springs and drinking water resources, motherhood, pregnancy, fertility and also as an aspect that stabilizes emotional identification with places and feeling at home.

The qualities that make places in Virgo so favorable and supportive for the development of mega-cities are to be seen in it`s reflexes for self-protection, reason, health care, optimal use of resources, strategical planning, storing goods and a topographical situation that helps defend and control a region.

The Delta Cities in between Aquarius and Pisces

First of all Alexandria and Shanghai two really outstanding examples for mega-cities in their time are both located in between air sign Aquarius sign of the water bearer and rainy season and the first degrees of water sign Pisces the sign of the sea. The sunken ancient cities of Canopus, Heracleion and Menouthis only a few km east of Alexandria are extremely typical for the position in Pisces  which represents the home and territory of Poseidon or Neptune the god of the ocean whose home is underwater.

The degrees of the zodiac at the end of air sign Aquarius and the beginning of water sign Pisces are known for their close relation with floods caused by heavy rainfall and on a psychological, social or political level for the flooding of outdated structures. Both places Alexandria and Shanghai are important sea port towns located at the river deltas of two of the largest rivers on the planet: the river Nile the world`s longest river and Yangtze river as world`s number 3 by length. These delta areas are subject to the most intense floods every spring.

The role of Aquarius in Megacities

Shanghai`s historical and strategical importance lies in its position on the most eastern point of China – closest to Japan and the USA. Shanghai became the gate to the modern world since the middle of 19th century for a China which had isolated itself from the rest of the world over 400 years.  Shanghai is located in air sign Aquarius the sign of the sky, innovation, revolution, inventions and between Aquarius and Pisces,

Aquarius resonates with Shanghai as China´s gate to the world of modernity and its technologically, socially and economically most advanced city since that era.

Virgo plus Scorpio – the “Athens Constellation”

The ancient Greek capital Athens is one of the most successful, influential and stable cities in human history. It`s role in the history of urban culture and for the development of the culture of citizenship, democracy, science, technology, philosophy and art is outstanding. Athens was the prototype for the mega capitals Rome and Alexandria.

The combination of the astrogeographical resonance of Athen has proved to be particularly useful for the functional aspects and organization needed for a metropolis. And this is also the focus which these two particular signs suggest: a focus on self-defense, industry and optimal use of resources.

Satellite image of the 12,500.000 inhabitants metropolis of Shenzhen to the north of the north of the Hongkong peninsula, Shenzhen is a an example for the combination of Virgo with Scorpio. Hong Kong is not on the top 30 list as it has “only” 7.5 million inhabitants lies in Scorpio with Libra.

Fire sign Leo is the leading sign on the 2014 list with 10 cities in this astrogeographical coordinate although it played no role at all for the regions of megacities in the 1st century. This of course is a clear indication for the intense changes of decisive factors for megacities over the last 2000 years. So what does Leo stand for in astrogeography?

First of all Leo as the sign of the Sun is the sign of centralism and highest magnetism.  This is because the Sun is the largest object and the centre of our solar system. This explains Leo`s highly energetical, magnetical and stimulating effect. Leo`s role as a fixed sign indicates a particularly stable, prominent and magnetic role of any morphogenetical field with this aspectt.  In the human body Leo relates to the heart which is the central giver of stimulus for all physical processes. And as such Leo stands for the center of emotionality of individual perception, sexuality, desire and power. In politics Leo as the sign of monarchy stands for centralism, absolutism and the rule and dominance of the center over the parts.

Leo`s magnetism seems to attract people and stimulate being in groups and crowds of people. In astrogeographic field study this aspect of Leo as an indicator for places which not only attracts people but also supports them with vivid, living energies and stimulation can be observed on all the radius/size levels of morphogenetic fields.

Leo seems to be the indicator for the world capitals.  Beijing, New York and Washington three of the four politically most important cities on the planet are located in Leo. An astrological explanation why this effect of Leo is so outstanding can mostly be seen in the reflex of Leo to concentrate power in the hands of one of few individuals or since we are talking about places – in one place.

Leo as the producer and consumer of electricity

And Leo is the sign of stored sunlight (carbon and oil) of power plants and therefore closely related to the topic of the consumption of electricity. Important astrogeographical examplesfor this typical aspect of Leo are the superlarge power plants and other places of intense electrical energies set free..

A favourite example is the  3-Gorges-Dam at Jangtse River the largest power plant on the planet. Other examples are the Niagara Falls, Victoria Falls and Rhine Falls,

The decline of Rome and Carthage – Gemini loosing importance

Rome was by far the biggest and most dominant city in the 1st century. That was through the superior Roman Technology in the first place. Rome has has one coordinate in right in the middle of air sign Gemini the sign of technology, roads and bridges and one coordinate right between Gemini and water sign Cancer.

Some bridges and aqueducts built by roman architects are still standing until today.

Air sign Gemini has lost its status as a major indicator for the regions of megacities since the 1st century. Which conclusion can be drawn from this development? As the sign of road crossings Gemini`s role might traditionally have been based on it`s role as a crucial place for the large trading routes and on the stimulation Gemini provides for intercultural communication and exchange and for the development of technology and culture. As the Mediterranian Sea lost its importance as the center of the “modern world” the traditional shipping routes that connected the coasts of the mediterranean sea have lost their importance.

The harbour of Carthage which controled the center of the Mediterranean Sea and the Silk Route that connected East Asia with Europe (Peshawar in Gemini) have disappeared. Gemini is not the factor that supports the largest urban centers anymore.

Thailand´s capital Bangkok is the only megacity on the 2014 list of largest cities whose strategical role as a gate and bridge between continents is comparable to that of the ancient Gemini megacities Rome and Carthage.

The site of Tenochtitlan the capital of the aztec empire was the home for an estimated 200.000 inhabitants during the 15th century. Today it is the centre of the capital of Mexico. The history of the Fall of Techochtitlan and destruction of Montezuma`s royal palace by the spanish invaders is an example for the relationship orientation, openness, idealism, naivity and peaceful approach that can occur in Libra like in no other astrological sign.

Astrological evaluation of the astrogeographic positions of cities can be useful for various purposes :

1  for consultation about auspicious places and understanding of the mundane and karmic relationship of individuals with places.

2  for interpretation of mundane charts

3  for evaluation of the influence that the place exerts

4  for understanding the topographic and geological location

5  for defining and understanding the economical, cultural, mythological, strategical and spiritual significance and character of the place