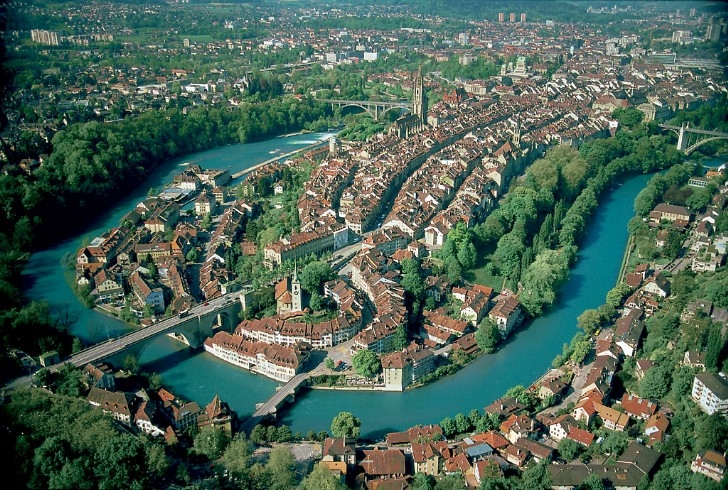 The astrogeographical resonance degrees for Bern

Bern or Berne  is the de facto capital of Switzerland, referred to as the “federal city”. Bern is thought to have been founded in 1191 by Berthold V, Duke of Zähringen.

Astrogeographical degrees for Bern for morphogenetic field level 1 which describes the international and global resonance of the capital and political center of Switzerland: one coordinate is located at 29° in dynamic male fire sign Aries the sign of action, speed, warfare, decisions and beginnings and at 13° in creative, innovative, holistic air sign Aquarius sign of the sky, heaven, paradise, self-finding, abstraction, innovation, inventions, individuality, emancipation and self-liberation

Natal or Foundation Charts for Switzerland

The constitution of 1848 with Pluto conjunct Bern

The chart for the Swiss constitution of 1848 is named by swiss astrologers as the initial chart for modern Switzerland. The exact time of the event given by J.H. Taeger and N. Campion for 11:12 a.m. has been checked by swiss astrologer Beatrice Ganz who provides proof that the constitution was passed shortly before 1 p.m.. The revolutionary Pluto-Uranus conjunction of the years 1848-50 explains the decision for the new swiss constitution on the background of a worldwide movements of struggle for reform, emancipation and self-liberation.

The constitution of 1848 was passed with Jupiter the planet of victory, healing, luxury and expansion at 12° Leo challenging the position of the existing government in Bern through an exact opposition to the 13°Aquarius resonance coordinate. It is remarkable that Jupiter made a return to his position from the Rütlischwur providing direct resonance and continuity with the foundation of the swiss union.

Slow moving Pluto the planet of defense, trauma, ideology, belief systems, pain, dominance, hierarchy and indicator for the transformation of patterns of role conduct at 27°Aries was conjunct the 29°Aries resonance coordinate of Bern during that period. Pluto`s position explains the new constitution as an act of transformation (adaptation) of the political system but also of the fortification of the country`s capital, its political autonomy and its readiness for alertness and aggressive self-defense (Aries).

The exact opposition of Saturn the planet of rules and regulations in opposition to the Sun indicator of emotional self-expression and subjective desires together with the position of Venus the planet of relationship in Libra the sign of justice and peace as her own sign and house ruler at midheaven seems to mark the function of the new constitution as an agreement that terminated with the topics of the “Sonderbundskrieg” – the swiss civil war of November 1847.

The Rütlischwur Oath during a Sun-Jupiter- Mars conjunction opposite Bern

The Rütlischwur is a legendary oath taken at the foundation of the Old Swiss Confederacy by the representatives of the three founding cantons,  Uri, Schwyz and Unterwalden, traditionally dated to August, 1 1307. It is named for the site of the oath-taking, the Rütli, a meadow above Lake Uri near Seelisberg.

Astrogeographical position of the Rütli for morphogenetic field level 1 wjhich describes the supraregional topics of the site: one coordinate is at 13° in solid, fixed earjh sign Taurus sign of the earth, grounding, roots, possession of territory and income. 2nd coordinate is at 12° in air sign Aquarius sign of self-finding, emancipation, self-liberation and revolution.

The astrogeographical positions of todays capital of switerland in Bern were aspected by a Sun – Jupiter – Mars conjunction between 15° and 7°Leo in opposition to the 13°Aquarius resonance coordinate of Bern. This allignment seems to resonate with the liberation of the site of what has become the capital of Switzerland as a place of central resonance for swiss independence. At the same time the allignment appeared in exact square and opposition to the supraregional resonance coordinates (FL1) of the Rütli meadows (13°TA-12°AQU). Through the allignment of all three fiery planets firmly challenging the “ruling coordinates” of the place and region of the Rütli meadow the Rütlischwur appears as strongly decided emotional statement and threatening warfare (Mars-Jupiter cj.) against the politcal rulers of the region. This overall image presents a fascinating and really impressive example for how to organize a revolution.

Independence from the Holy Roman Empire

The legal independence of Switzerland from the Holy Roman Empire was a result of the Peace of Westphalia signed on 24 October 1648. The Peace of Westphalia was a series of peace treaties signed between May and October 1648 in the Westphalian cities of Osnabrück and Münster, largely ending the European wars of religion, including the Thirty Years’ War.  Along with a large number of regulations it also settled the formal independence of Switzerland.

The resonance of the cojnunction of Mars with Chiron in the center of fire sign Leo and opposite the 13°Aquarius resonance coordinate of Bern appears as a strong hint at the resonance with the Jupiter positions of the Rütlischwur as well as the constitution of 1848. Jupiter himself at 29°Virgo was exactly conjunct the astrogeographical resonance degree of Berlin pointing at the importance of the Treaty of Westphalia in the process of reduction of the Holy Roman Empire and the retarded developmetnt of the first german national state in the 2nd half of the 19th century.

Women in Switzerland gained the right to vote in federal elections after a referendum on 7 February 1971 in which 66. A previous referendum on women’s suffrage was held on 1 February 1959 and was rejected by the majority (67%) of Switzerland’s men. The choice of dates with the Sun in Aquarius the sign of emancipation, self-liberation, globalization, non duality, meta-sexuality, castration, revolution and reconnection with the fuller potentials of humans would seem as a factor in favour of women´s human rights. But the results from the first referendum did not fullfill that expectation.

The first referendum was held under a Sun-Uranus opposition with the Sun at 12°Aquarius exactly conjunct the 13°Aquarius resonance coordinate of Bern and Uranus the planet of emancipation, self-liberation and globalization exactly opposite at 14°Leo. It is hard to understand why women´s right to vote was neglected as late as 1959 and even more so under such an overwhelmingly strong transit of Uranus. But as we have seen from the exact Uranus return of the Hitler inauguration of 1933 (20°Aries) during the Trump inauguration of 2017 – Uranus appears to be often captured by the antagonisms of fascistoid reflexes and does not necessarily stand for rebellion and revolution – unless the behaviour of swiss gentlemen to decide for preventing the female right to vote is itself seen as a rebellion, revolution and/or an act of castration.

A possible explanation could be seen in the fact that the referendum was held in the wake of the square transit of Neptune the planet of insecurity to the astrogeographical resonance coordinate of the swiss capital Bern. In terms of gender and sexuality a Neptune square indicates the fear of losing control and of drowning in weakness and chaos.

During the first referendum Venus the indicator for the female gender was at 1°Pisces a position of depression a situation of the loss of legal status, negelection and being treated as a foreigner wezjer in a foreign or in one´s own country.

Mars the planet of male gender was at 26°in earth sign Taurus the sign of wealth, possession of territory, social status, money, income. market places and the right to exploit farmland indicating financial purposes as the actual driving forces behind the male dominance. Mars seems to have been cooperating with Jupiter the planet of the priest caste, philosophy, explanations and of victory at 29°Scorpio although through an opposition. The position of Jupiter in the last degrees of Scorpio the sign of hierarchy, dominance, ideology, dogma and habitual patterns of role conduct appears as a constellation of mental infiltration and manipulation through the profiteers from the traditional caste system here.

From an astrogeographical point of view the positive results from the 2nd referendum appear as a result from the negative decision in the first referendum. Saturn the planet of critical revision of laws, rules and regulations at 16°Taurus (center of society) occupied a square position to Bern`s 13°Aquarius coordinate explaining intense tension on the swiss government from the very center of society, the market places, economy, food production and (female) land owners. The Moon – planet of the fertility, conception, motherhood, pregnancy, the uterus as well as the testicles, emotional identity, authenticity and modernity as well as of ancestor lines was in its own sign Cancer and in exact trine to Saturn.

Mercury the planet of intelligence, learning, communication and through its role as the ruler of Gemini the most important astrological resonator for equal rights, democracy and parliamentary processes put intense pressure on the 29°Aries resonance degree of the swiss government from 29°Capricorn.