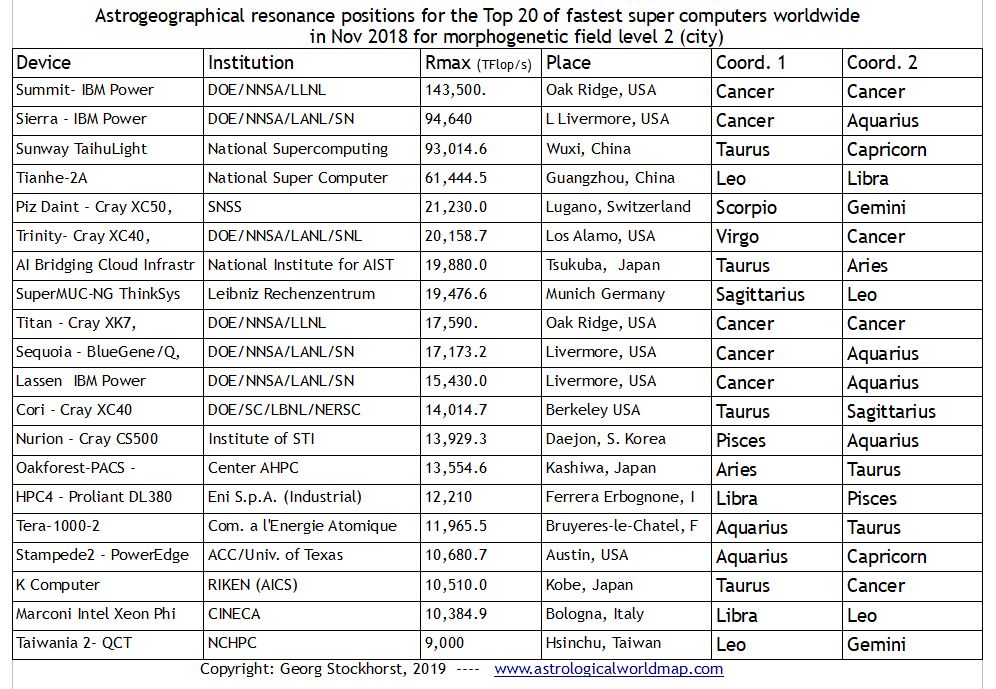 Related articies: Aries and Taurus – CERN and the Large Hadron Collider, Astrology and History: The Discovery of the Gravitational Waves,

The positions are calculated for morphogenetic field level 2 wich gives the positions of the town they are located in. The reason is that I was simply unable to find more precise data for the exact locations of the facilities. Only in very few cases calculation for field level 3 would be possible.

The resonance position for morphogenetic field level 2 (city) show the positions of the research facilities rather than the exact location of the hardware. They can be used for conclusions about the topics, aims, functions and characteristics of such research facilities. Most of the institutions are run by national research institutions with one exception: the italian Eni S.p.A. energy company who runs its facility 60 km south of Milan for industrial purposes.

The TOP 500 project ranks and details the 500 most powerful non-distributed computer systems in the world. The project was started in 1993 and publishes an updated list of the supercomputers twice a year.

In few cases I was able to spot the exact position of the building where the hardware for the supercomputers is installed.

Astrogeographical resonance position of the Leibniz Supercomputing Center building for morphogenetzic field level 4 which describes the energetical tpics of the building itself: one coordinate stretches from movable air sign Gemini sign of information, interfaces, new technologies, connections, data, communications and experiments into self-protective, self-centered water sign Cancer sign of caves and bunkers, emotional identity and authenticity and an important astrogeographical resonator for modernity. Cancer has a tendency to we´want to recapitulate every single step of thinking making it a plausible factor for counting and logical and mathematical operations. As the sign of twins Gemini relates to the twin building. The 2nd coordinate is in dynamic male fire Aries sign of unicellular objects and beings, action, speed, ignition, strongholds and a plausible resonator for attempts of speeding up processes.