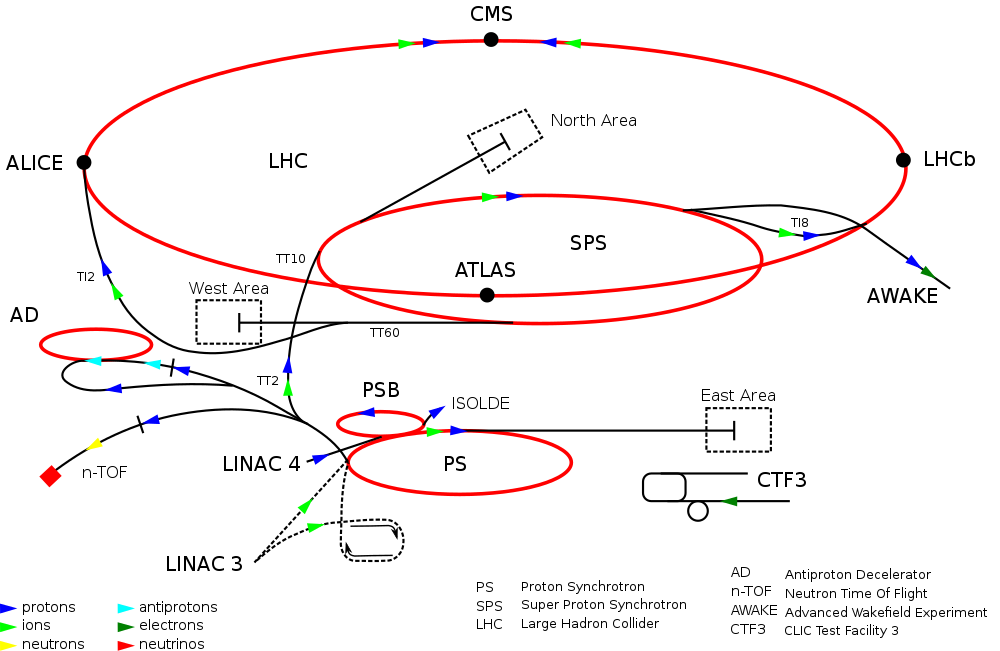 Compare: Astrology & History: The Discovery of the Gravitational Waves, Astrology & Architecture – Aries as the Sign of Unicellular Structures,

CERN and the Large Hadron Collider

The headquarters of the European Organization for Nuclear Research (CERN) in Meyrin near Geneva (Switzerland) is situated in the combination of dynamic male, movable fire sign Aries the sign of speed, action, ignition, warfare and unicellular structures with fixed earth sign Taurus sign of the earth, matter, grounding, stability, gravitation, mass. growing roots and profitability. This applies to morphogenetical radius/field level 3 which describes the atmosphere and energetical topics of the area of the Hadron Collider and how the place is embedded in the surrounding area.

Especially with regard to the different particle accelerators that have been developed and tested here, this astrological combination is absolutely fascinating. Aries as the first principle in the astrological structural imaging system stands for the smallest unit of energy and especially for bringing particles in motion. Taurus as the second principle and through its definition as an earth sign represents matter in general. Being placed here together with Aries, it could be seen as an astrological archetypal image of the two basic components of the smallest stable particles of matter. In this respect, the constellation of Aries with Taurus seems to be symptomatic of nuclear research.

The Large Hadron Collider has been the most spectacular project at CERN so far.

The astrogeographic constellation of the site is intensily reflected by the horoscope chart for the moment when the LHC was started on 10 September 2008. Mars the ruling planet of Aries. and Venus the ruling planet of Taurus. were in exact conjunction. This clearly indicates the issue of that day, that undirected energy (Mars) could be sent out to split solid materia (Venus).

And interesting enough, another planet had joined this conjunction exactly: Mercury the ruling planet of air sign Gemini. There are different possible approaches to trying to understand the indication of the presence of Mercury here. As the ruler of the third astrological principle he is to be seen as the third element or dimension in addition to the combination of the first two elements which represent free energy and solid matter. There are physical and philosphic and even esoteric implications to this 3 dimensional conjunction of the first 3 astrological elements. As an air sign Mercury may be understood to represent a third kind of small particles which are set free by the collisions in the LHC tube.

I want to suggest that apart from these considerations Mercury can also be interpreted as standing for the experimenters who are simply trying out, testing, observing, writing down what they see, analyzing it and doing their job of acquiring information. If we regard Mercury as the observing experimenter here, he appears to come really very close to the colliding objects because Mercury is in such a close conjunction to Venus and Mars. This would hint at an aspect where Mercury would stand for the highly sensitive measuring instruments capable of recording even the smallest particles.

At the moment of the triggering of the long time awaited start of LHC this three dimensional constellation happened to be in the 12th house. There may be multiple visions for interpreting this position. First of all the twelfth house as the potential of any system to reconnect with its own spiritual origin represents the spiritual sphere. Because this includes that the twelfth house stands for the invisible even called “immaterial” this aspect may be understood best as an indication that the experiment was made to be able to perceive the invisible, and this even more so because the three planets are placed in Libra, the sign of the sense organs (organs of perception).

A Mars – Venus conjunction as the inspiration for the Higgs Boson

On July 4 2012 during a press conference started at 8:50 CERN officials announced that after less than 4 years of research the Higgs-Boson an elementary particle suggested by Peter Higgs in 1964 had been found. Peter Higgs recorded that he had the idea for his concept on 17 July 1964 at midday. That was the day of an exact conjunction of Mars the ruler of Aries with Venus the ruler of Taurus in the sign of the “third dimension” Gemini. See the horoscope chart for that exact conjunction at midday – or exactly 12:15 UT:

Considering these two horoscopes the position of the CERN Headquarters in the astrogeographic sign constellation of Aries with Taurus, is an indication that the site where CERN is situated is to be evaluated as in harmony with the purpose of finding the “Higgs Boson”. It simply is a good place for this project !! Peter Higgs was born 29 May 1929 with the Sun and Mercury in Gemini.