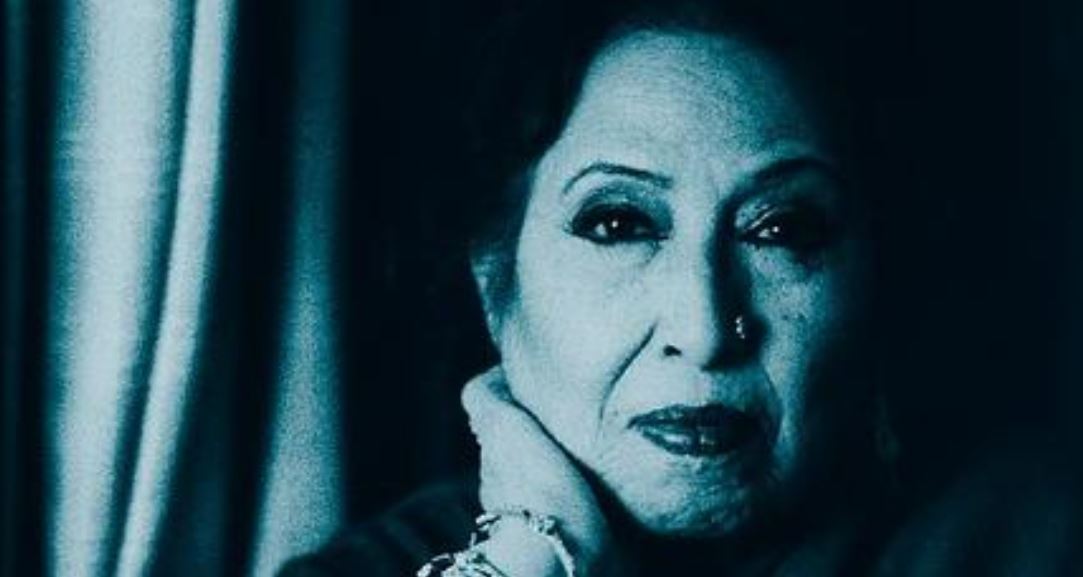 Iqbal Bano won the important Pakistani Pride of Performance Award in 1974. Bano is one of the most famous female Ghazal singers in history. Born on August 27 1935 in Delhi, India she lived in Pakistan most of her life. Her performance of semi-classical Urdu ghazal songs and classical indian  thumris was exceptional. She also sang easy-listening numbers in the 1950s films. Iqbal Bano’s best and most famous work includes her signing of the great Urdu poet Faiz Ahmed Faiz.

Iqbal Bano was born with Moon in Leo sign of intensity of self-expression, Venus-Mercury conj. in Virgo sign of Indian yoga culture and a particular talent for conserving inspiration from folk music (compare: G.Welch, J. Mitchell).

A fascinating aspect of her music is reflected in the conjunction of Neptune planet of the “boundless ocean of spirituality”, the pure self, eternal soul, weakness, the unconscious, insible essence and ruler of Pisces the sign of music, empty space and subtle consciousness with the black moon Lilith the resonating astrological factor of suppressed truth, pain, suffering and individuality.

Iqbal Bano shared the square position of Jupiter the planet of individual thinking in Scorpio the sign of trauma through limitations caused by social conditioning and patterns of moral role conduct with the Moon in Leo the sign of the urge for unhindered individuality of emotional self-expression.

Faiz Ahmad Faiz 13 February 1911 – 20 November 1984) was a Pakistani leftist poet and author, and one of the most celebrated writers of the Urdu language. Faiz was nominated for Nobel Prize in Literature and won the Lenin Peace Prize in 1962.

Faiz Ahmad Faiz was born with the sun in creative, innovative air sign Aquarius the sign of inspiration, idealism, self. finding, abstraction, flying, emancipation, revolution and reconnection with the view on the fuller potentials of humanity. Important factors for his holistic and intensely political outlook are the Mercury-Uranus conjunction near 0°Aquarius the position of the world government and also Mars in Capricorn.