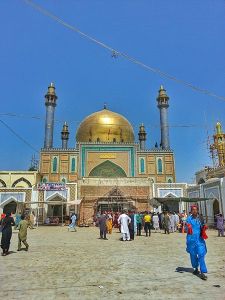 Astrology & Terrorism: The Suicide Bombing Attack on the Lal Shahbaz Qalandar Shrine Sufi Shrine in Pakistan on 16 February 2017 in astrogeography

The Suicide Bombing Attack on the Lal Shahbaz Qalandar Shrine

From an astrogeographical point of view catastrophical events and events of violence especially political violence are an expression and discharge of blocked energies from the morphogenetical field system (emotional, mental, physical fields) of an area, nation or larger region. The resonance between the transiting planets at the time of an event and the astrogeographical position of the place where they occur explain the psychological topics that trigger the events.

At least 75 people were killed and 250 injured in a suicide attack Thursday night some time before 20:09 (first twitter message) at the shrine the Sufi saint Lal Shahbaz Qalandar (1176-1275) Shrine  also Sehwan Sharif in the City of Sehwan in Pakistan`s Sindh province on Thursday 16 February 2017. The attack was directed at the weekly sacred Sufi celebration held at the shrine every Thursday evening..

This was the first twitter message reporting that the news was published by SAMAA TV station. The time is shown in CET:

The event chart for the suicide bombing by a male terrorist dressed as a female has the ascendant at 21°Virgo – a degree known for its strong impact related to castration, projection of hate and the motive to destroy what`s alive, happy and autonomous in other people`s spheres. In terms of astrological aspects the degree relates to the topics of the Uranus-Moon and Uranus-Pluto combinations. Chiron as the ruler of ascending sign Virgo the first indicator for the suicide bomber was on a complementary degree to the ascendant at 23°Pisces occupying the descendant and starting point of the house of relationship. Uranus on the cusp of house 8 further emphasizes the Uranus-Pluto topic which has been the central issue of the last 4-5 years due to the ongoing process of the Uranus-Pluto square transits.

Astrogeographic position for morphogenetic field level 1 which explains the supraregional meaning of the City of Sehwan: the astrogeographical longitude coordinate is located at 4° in earth sign Taurus and 25° in air sign Gemini.

At the moment of the suicide attack the Moon at 4° Scorpio was in exact opposition to the site of the holy shrine. The shrine`s position at 4°Taurus the sign of wealth, social integration and possessing one´s own territory was so confronted by a Moon transit in Scorpio the sign of the property of others. The transit strongly indicates envy or in other words the attempt to attack the integrity and autonomy of other people`s territorial domain. As a fast moving planet the Moon position stands for a personal, momentary and acute triggering factor and reason for carrying out the attack. Its combined position with Jupiter in house 2 indicates the personal motive of financial gains for the suicide bomber. In regard to the purpose of the suicide bomber`s clients it can be concluded that the possession of claims to dogmatic and ideological supremacy in the hierarchical system of Pakistani society (Moon in Scorpio in house 2) was their purpose for ordering the attack to be carried out.

Through his square position to the 25°Gemini astrogeographic coordinate of the sacred shrine Chiron at 23° Pisces combined with his role as ascendant ruler Chiron is the first indicator for the suicide bomber.

The Magic of the Lal Shahbaz Qalandar Shrine

Syed Muhammad Usman Marwandi is considered one of the most important representatives of the wandering Qalandar sufi dervishes. For a more profound read about Sufi traditions you may start with the wiki article.In Pakistan Sufi tradition has also had the chance for exchange with the the more ancient traditions of Indian monk and yoga culture.

The site of the shrine is said to be the place of an ancient Shiva temple. The astrogeographical position of the shrine in Cancer (for fl3 – see text below) supports the assumption that the shrine may have actually been the site of a Shiva temple. Compare: The Sites of the 12 Jyotirlinga in Astrology, The source of the river Ganges in Cancer-Scorpio , Sri Amarnath Shiva Lingam in Aries with Cancer,  Shiva in two water signs,  Mount Kailash in Astrogeography,

The Sufi tradition is an extremely important part of Islam. It relates to the ancient tradition of monk orders in the region near the Indian subcontinent and also to ancient Persian and Turkish traditions. Parallels between Sufism in Christian spiritual traditions include the monk orders and the tradition of saints.

Astrogeographical position of the whole temple area of Lal Shahbaz Qalandar Shrine for morphogenetic field level 3 which describes the energetical situation and topics of the whole of the larger temple area:  one coordinate lies between 25°- 28° in fire sign Sagittarius (priest castes, preaching, travelling, thinking) and the second between 10° and 18° in water sign Cancer (fertility, emotional roots, ancestors lines).

Astrogeographical position of the central shrine itself for the astrogeographical field level 4 (exact position, building itself) which describes the energy of the smaller main shrine with the golden dome: One coordinate is located in highly energetic, magnetic fire sign Leo the sign of the sun, light, gold, self-centeredness, emotional self-expression, intensity, the heart. power stations and indicator of a temple of light. The second coordinate lies in creative, innovative, spiritual air sign Aquarius the sign of the sky, heaven, self-finding, self-liberation, Sanyas, leaving the past behind, rebellion, purification, abstraction and the ideal of equality of humans. The combination of Leo with Aquarius combines two of the most important indicators for ecstasy explains the euphorical atmosphere at the shrine.