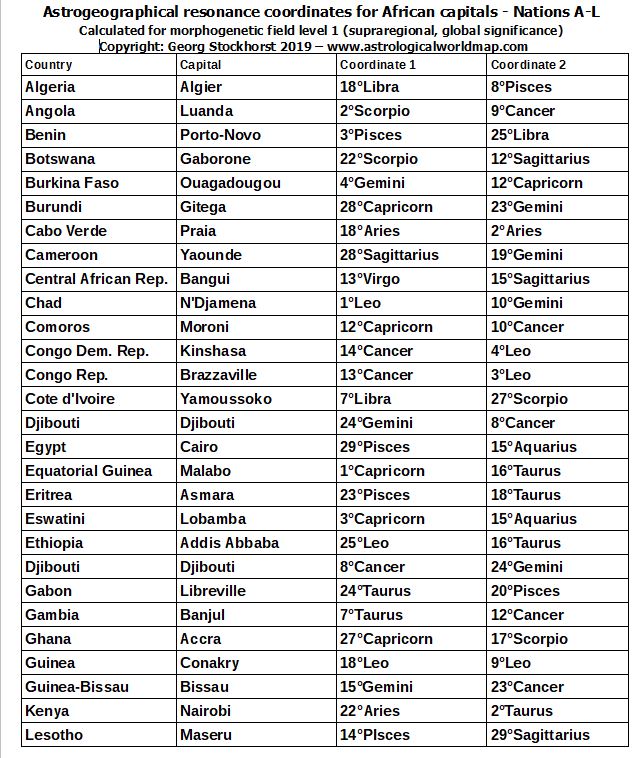 The African Union in astrology

Astrogeographical resonance coordinates of the headquarters of the African Union for morphogenetic field level 1 (region) which defines the global resonance topics of the African Unions Commission: one coordinate is located at 25° in highly magnetic, centralist, royal fire sign Leo sign of the sun, light, self-esteem and at 16° in solid, fixed, centralist earth sign Taurus sign of market places, food production, income, economy, agriculture. The astrogeographical parallel to the capitals of the largest territorial nations: India (Taurus-Leo), Beijing. (Leo-Sagittarius), Moscow (Taurus-Cancer) and Washington (Leo – Cancer) speaks in favor of a future role of Addis Ababa as a positive site for a capital for the United States of Africa.

Astrogeographical resonance coordinates of the African Union headquarter building complex in Addis Ababa for morphogenetic field level 3 (surrounding area) which describes the energetical topics of the whole building complex: The buildings are located in solid fixed water sign Scorpio and spiritual water sign Pisces. I think its remarkable here that the resonance coordinates of the construction site and surrounding area are in the astrogeographical resonating signs of the EU capital in Brussels (but for FL1). This combination of signs seems to support institutions dedicated to the cooperation of nations.

Foundation charts for the African Union

The Organisation of African Unity (OAU) was established on 25 May 1963 in Addis Ababa, Ethiopia, with 32 signatory governments. One of the main heads for OAU’s establishment was Kwame Nkrumah the 1st President of Ghana (born 21 September 1912 with he Sun in Virgo the sign of). It was disbanded on 9 July 2002 and replaced by the African Union (AU). Some of the key aims of the OAU were to encourage political and economic integration among member states, and to eradicate colonialism and neo-colonialism from the African continent.

The Organisation of African Nations was founded during the ingress of Uranus the planet of rebellion, revolution, self-liberation. self-finding, globalization, innovation and abstraction in careful, self-protective earth sign Virgo the sign of slavery, reason, health, protection of nature, plants, agriculture, food supply, healing, doctors, medicine, strategical planning, optimal use of resources and adjustment to needs.

That transit alone can serve to explain the major purpose of the foundation of the African self-help organization during a new stage of the process of self-liberation of Africa from the period under the grip of European colonialism and enslavement since the early 1960ies.

The 2nd step in the Foundation of the African Union was made during the ingress of Uranus as the planet of globalization in Pisces and in exact opposition to its position during the foundation of its predecessor the Organisation of African Unity. Politically it was a consequence of the dissolution of the Russian Colonial Empire (USSR) and the resulting example of the extension of the European Community into the European Union.

Astrogeographical positions of the capitals of African nations