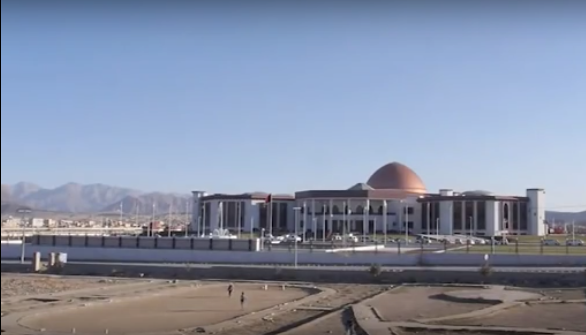 Astrogeographical position of Kabul and transits for Afghanistan. Political and mundane astrology: transits of the outer planets in relation to the capital and government of Afghanistan

Astrogeographical position of Kabul for morphogenetic field level 1 which defines the supra-regional, international situation and role of the capital and government of Afghanistan: The capital of Afghanistan is located at 11° Sagittarius and 20° Taurus.

The modern, democratic Constitution of Afghanistan was approved on 4 January 2004 by a 502-delegate so called loya jirga which had convened in Kabul on December 14, 2003.

The democratic constitution was approved with Mars the planet of warfare in exact trine to Kabul`s 11°Sagittarius coordinate from 11° in fire sign Aries the sign of action, warfare, ignition, new starts in a highly positive aspect for the future development of the country`s readiness for national self-defense. Neptune the planet of spirituality occupied the half sum between Mars and Kabul at 11°Aquarius in an aspect that stood for the protection of the spirituality and essence of religion, the protection of the weakest part of the population (women, kids and minorities) Through the new constitution. The problematic side of this Neptune position reflects the weakness of the government, the allowance of drug production, territorial claims of warlords and ethnical groups and probably also a high amount of corruption. That constellation reveals the full amount of compromise – false or not – that the new political system has to rely on.

The Moon was in Gemini the sign of parliamentary institutions and democracy in a highly positive position for though nearly in opposition to Kabul. This Moon position in Gemini points at the aim of the post Taliban constitution to support individual human rights and liberty, education, communication, innovation and technological progress, building roads and the role of the parliament as an interface and bridge between the conflicting parties, ethical groups and political spheres of interest. The Moon opposition and conjunction with the black Moon Lilith is a clear hint that the democratic institutions, parliament, nationwide government and strict separation of executive, legislative and judicial powers are in direct confrontation with the economical, political, ideological and military structures and inheritance. In this regard the position of Kabul in Sagittarius appears to resonate with susceptibility of Afghanistans political situation to pseudo-religious and economical manipulation in the name of the illegal drug producing industries, global players (Pakistan, Saudi-Arabia, USA, Russia), the pseudo priest castes and the use of ideology for the extinction of serious religion, spirituality and live as such.

The North Node was exactly conjunct the astrogeographical degree of Kabul at 20° Taurus the sign of agriculture, profitability and market places pointing at the aim of consolidating the country`s territorial integrity, strengthening the national morphic field and central government.

The last year saw an intensely challenging aspect for Kabul with Saturn transiting 20° Scorpio the point of opposition to the afghan capital (20°Taurus) between December 2013 and October 2014. Saturn`s transit over the position of Kabul at 11° Sagittarius will be effective from December 2015 until November 2016 and as an aspect of conjunction could to some extent introduce a momentum of stabilization at least to the capital area of Afghanistan.

The next transit on the agenda will be Neptune moving over 11° Pisces in a square to the position of Kabul at 11°Sagittarius between March 2016 and March 2018. This aspect of destabilization does surely not indicate support for the independence of Kabul.  It can be interpreted as an aspect of manipulation and corruption particularly involving the drug production in the country. And as initiated through a square these influences may rather originate from abroad than from Kabul itself.

The climax of the transit of Uranus the planet of globalization over the 20° Taurus position of the government of Afghanistan will be first triggered in July 2022 and will be fully effective until April 2025. Altogether there is the chance that territorial  threats to the country`s independence exerted under the cover the pseudo-reliegious, anti-spiritual, pseuodo-islamic and  neo-fascist forces could lead to a stronger need for self-liberation and solidarity among the population.

The transit of Uranus in Taurus suggests the need for large scale economical, technological and social reforms. But of course the threat to the independence and stability of Afghanistan through global political spheres of interest could not be stronger than during a Uranus transit over the capital. Uranus will most certainly bring a revival of the Taliban sphere of interest and most probably more aerial attacks by the US led alliance to fight back the Pakistani and Saudi-Arabian/Gulf States/Sunnite control over the country.

The Taliban occupation of Kabul on 27 September 1996  began shortly after Pluto´s ingress into Sagittarius and his approach towards the astrogeographical position at 11°Sagittarius. This event indicates a strongest sensitivity of Kabul to ingresses of the outer planets into that sign. Pluto the planet of dogma, ideology, hierarchy, role conduct and trauma stood for the hierarchical, fascistoid system established by the Taliban. Typical for Pluto was the replacement of spirituality and substantial religion by religious dogma.

Retrograde Saturn opposite Kabul: the US invasion of 2001

The attacks on the World Trade Center on September, 11 2001 were followed by the US invasion in Afghanistan under the name of Operation Enduring Freedom.
The invasion was preceded by the first airstrikes on October, 7 2001 while retrograde Saturn at 14°Gemini approached the exact opposition to Pluto the indicator for pseudo-religious ideology and neo-fascist patterns of gender role conduct at 13° in fire sign Sagittarius the sign of the priest castes, preachers and mental corruption. During the Fall of Kabul on 12 November with Saturn had reached 13° Gemini. Soon after Saturn reached the exact opposition to Kabul´s 11°Sagittarius coordinate by late November during the through the Fall of Kandahar before the Battle of Tora Bora ended the war by December 17 with Saturn at 10° Gemini.