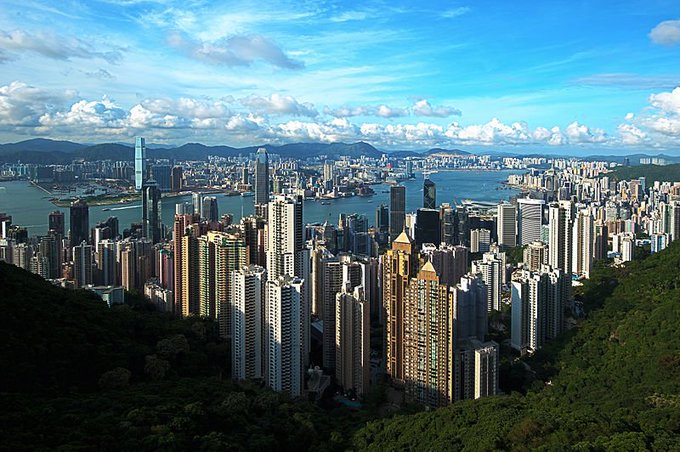 The astrogeographical position of Hongkong. Political astrology and astrogeography: past and future transits of the outer planets in relation to the Hongkong territory.

The astrogeographical position of Hongkong

Astrogeographical resonance degrees of the City of Lhasa for morphogenetic field level 1 which describe the international, supra-regional topics of the whole of the central Hongkong area: Hongkong is located at 20° in highly defensive, solid fixes water sign Scorpio the sign of fortresses, metal working, sculpting and visualization and at 6° in service-orientated, aristocratic air sign Libra the sign of harmony, balance, justice, symmetry, peace and the most important resonator for Chinese culture.

Transits of the Outer Planets in the History of Honkong

While I´m starting to work on this article in October 2019 the Chinese Central government seems to tighten its grip on the territory of Hongkong. And it seems a matter of months or few years until the dictatorship of the Chinese central government along with the global super-players of Chinese hyper-capitalism will take over full control over the city of Hongkong in order to suppress the human rights of the population to keep that ideal and vision from spreading over China.

Chiron the systemical planetary ruler of Virgo the sign of reason and strategical planning is currently transiting the exact opposition to the City of Hongkong 5°Libra indicating that the current pressure from the Chinese Government is concentrated on strategical measures dedicated at taking over long-term control over the situation in Hongkong rather than unfolding the full violence that the regime is capable of.

The ingress of Uranus the planet of globalization in Taurus the sign of markets, food and income who is currently transiting the square position to the 3°Leo resonance coordinate of Beijing until April 2020 seems to put strong pressure on the center of the national morphic field for the whole of China. This pressure appears to manifest in the current protests against the Chinese dominance over Hongkong and the Trade war started by the trump government.

The coming transit of Uranus in opposition to the 20°Scorpio coordinate of Hongkong between April 2023 and May 2024 will most probably turn out as a heavy threat to the human rights situation in Hong Kong, its current legal status and the relative freedom of the people of Hong Kong.

The ceding of Hongkong to the British Crown was decided with Saturn the planet of control, rules and regulations, borders, government institutions and a resonator for the City of London was in exact square to the 6°Libra resonance coordinate of Hongkong from 7°Capricorn. This transit explains the tight pressure on the City and its separation from China. Another major planetary tension was through the square transit of Neptune indicator for the destabilization of territorial control and possibly also for the British infiltration, corruption and destruction of Chinese culture and autonomy through the Opium trade into China which caused a dramatic rise of addiction. The full impact of the negativity caused through the British controlled opium trade can be concluded from the following statistics:

In 1898, the Second Convention of Peking or Convention for the Extension of Hong Kong Territory further expanded the colony to 200 miles through the 99-year rent-free lease of Hongkong and the New Territories to the UK on June, 8 1898.

In the wake of China’s defeat in the First Sino-Japanese War (1894–1895) the British took advantage of the situation and forced the treaty known as the Second Convention of Peking on the weakened Chinese government. Under the convention the territories north of what is now Boundary Street and south of the Sham Chun River, and the surrounding islands, later known as the “New Territories” were leased to the United Kingdom for 99 years rent-free and so became part of the crown colony of Hong Kong.

The 2nd Convention of Beijing was signed with Mars the planet of warfare and aggression at 1° in earth sign Taurus the sign of territorial possession and expansion in exact square to the 3°Leo resonance coordinate of Beijing explaining the treaty as an act signed under military pressure on the Chinese government. This aspects explains the intense territorial and economical pressure exerted onto the Chinese Empire through that step in a “period of doom” as indicated by the even more powerful and extreme Pluto-Neptune conjunction opposite the 17°Sagittarius resonance coordinate of Beijing. It consisted of the planetary combination of the Sun at 18°Gemini as the sign ruler of the 3° Leo resonance coordinate of Beijing exactly occupying the half sum between the conjunction of Neptune the planet of destabilization of territorial control at 22°Gemini with Pluto the planet of trauma, pain, hierarchy, dependence and foreign property at 14°Gemini. This overall planetary constellation in opposition to Beijing explains how the UK along with other European imperialist (Germany, Russia, France) invaders took advantage of the weakness of the Chinese government at that time by forcing it to sign over 99-year territorial leases of profitable coastal territories between March and June 1898.

The Sino-British Joint Declaration of December, 19 1984

In 1984, the governments of the United Kingdom and the People’s Republic of China (PRC) concluded the Sino-British Joint Declaration on the Question of Hong Kong, under which the sovereignty of the leased territories, together with Hong Kong Island and Kowloon (south of Boundary Street) ceded under the Convention of Peking (1860), was transferred to the PRC on 1 July 1997. As part of the treaty the Chinese government pledged to respect the economic system and civil liberties of the British colony for fifty years after the handover – a date which will expire not before the year 2047.

The Sino-British Joint Declaration of 1984 was signed during the phase of the transit of Uranus the planet of globalization, self-liberation and reconnection with the country`s fuller potentials at 15°Sagittarius and conjunct the 17°Sagittarius resonance coordinate of the national morphic field of China which explains the profound changes in Chinese politics during that era. The simultaneous transit of Pluto the planet of steel industries, construction work and transformation at 4°Scorpio in exact square to the 3°Leo resonance coordinate that stands for the royalist, absolutist and hyper-centralist appeal of the Central government in Beijing explains that the Sino–British Joint Declaration was signed under the impression of a process of deep transformation going on in Chinese economy and industrial production at the time.

The transfer of sovereignty over Hong Kong

The handover of Hongkong to China on July 1 1997 ended 155 years of British possession of the city with Neptune indicator for destabilization of territorial possession and control at 29°Capricorn and conjunct the 27°Capricorn resonance coordinate of London. The Moon was in the center of earth sign Taurus the sign of territorial possessions with its sign rule Venus at 2°Leo exactly conjunct the 3°Leo resonance coordinate of Beijing explaining the extreme profitability of the step for China. Even Pluto the planet of defense, fortresses, trauma, pain and foreign rule was in a highly stimulating position occupying an exact trine to Beijing from 3°Sagittarius explaining the step as part of the healing of the national trauma and inferiority complex from the period of British colonialism along with the damage done through the infiltration of China with opium.

As for Hongkong itself Mars the planet of warfare was exactly conjunct the city indicating alertness and the beginning of a long phase of fighting of the people of Hong Kong for their guaranteed civil rights.